Asia Art Archive and the Museum of Modern Art jointly launched two projects based around first-hand accounts: the plan for the AAA’s “Materials of the Future: Documenting Contemporary Chinese Art from 1980-1990,” and MoMA’s book Contemporary Chinese Art: Primary Documents. Through the careful collection and translation of primary materials, the two bodies of texts explore the development of modern Chinese art over the past thirty years. At a press conference organized by the Central Academy of Fine Arts, leading Chinese artists Huang Rui, Xu Bing, and Song Dong were invited to share with the audience their experiences of the 1970s, 1980s, and 1990s respectively. 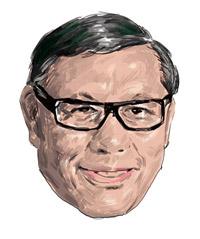 WU HUNG
Harrie A. Vanderstappen Distinguished Service Professor and Director of the Center for the Art of East Asia, University of Chicago

When we write about modern Chinese art, the story of the Stars Group is really important, sometimes so much so that it tends to crowd out everything else. Outside of China, when people teach the history of Chinese contemporary art, a lot of times they’ll only mention the Stars. But when you look at the art scene at the time, is it possible that we have made a particular decision about how to go about writing this history, one that places an inordinately heavy emphasis on politics? Avant-garde art is set up the same way in the West, in its political bent and its opposition to power. When the No Name Painting Society came out, for example, everyone thought, “Oh, there’s nothing political about this, it’s so pretty.” But now we have a problem. How do we go about writing the history of modern Chinese art? Do we do it with the traditional emphasis on the political and the avant-garde, or do you write a nice, mild-sounding recap that tries to fit in all of the trends that were out there? I’m curious what you think. I think there’s a really conscious political sense in your paintings, but there’s also a lot of romanticism, like, “Hey everyone, let’s get together and play the guitar, sing songs, have some drinks.” It could be that that was just a symbol of the times. Were those symbols a response to the tone of Chinese art in the 1970s? 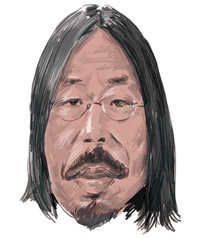 I think there’s a lot to be said for both points of view. I was sent out to the countryside during the Cultural Revolution. When I came back to Beijing around 1971 I started going to artistic salons, mainly the ones that [renowned poet] Bei Dao was organizing. Then from 1974 to 1979 I gradually started to go to gatherings that were in peoples’ studios, not in salons. One of them was put on by No Name, but it was held quite late at night. There were other people doing oil paintings in Beijing, people like Tang Pinggang. They were the children of high officials, didn’t have to go to work, had the money to buy the materials for their paintings, the paint, the paper, the canvas. They would work on copying other works at home, then head out to do sketches, we would go to their events too. Ma Desheng was a close friend of No Name, and so was Zhu Jinshi, both key members of the Stars. We didn’t have a registration form that made you one of our official members or anything, so when we set up the Stars, they just came along with us. Actually there was a bit of separation between us and No Name. It was how we thought about the Cultural Revolution, how we thought about politics. It wouldn’t have been easy to put together a real clear manifesto stating how we were different from one another. It was how we expressed our thinking about society’s problems that distinguished the one group from the other. There would’ve been no way for No Name and the Stars to register together, there were some works that just didn’t fit with each other. 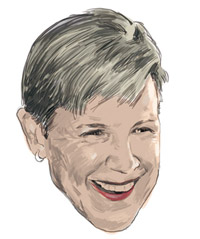 JANE DE BEVOISE IN DIALOGUE WITH XU BING
Chair of the Board of Directors, Asia Art Archive

We know that you graduated from the Central Academy of Fine Arts, that you started studying there in 1977. So I have a question: there has to be a difference between the way you were taught then and the way that they teach students there now. You’ve told me before that you started out with paintings of plaster casts, then you moved on to models, and you always thought the process of choosing the models was quite interesting. Can you talk about that process a little? 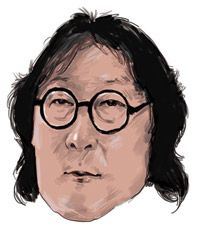 These things sound goofy now. But back in those days, right after the end of the Cultural Revolution, it was like everyone was slowly waking back up after a long sleep. When I first started at CAFA, we still weren’t allowed to paint European plaster casts, so we painted a sculpture of workers in wool scarves done by a professor in the sculpture department. It was only two years later that I started to paint European plasters. I spent a lot of time painting [Michaelangelo’s] David, because I thought that there could be nothing better than painting classical European plasters under the guidance of one of Xu Beihong’s students [ed. note: Xu Beihong, d. 1953, was a pioneer of Chinese modern art]. I only started painting nude models after I entered graduate school. First the graduate students, then the oil painting department, then the rest of the school.

Speaking of models, just a little while ago CAFA had a big “Sixty Years of Drawing” retrospective. I included a document, a letter written to Jiang Qing [ed. note: Mao Zedong’s last wife, and one of the prime movers of the Cultural Revolution] by a few of the professors at the academy titled, “CAFA Needs to Paint Models,” that Mao ended up responding to personally. He wrote, “human models are essential for art and science,” adding the line, “Models must be painted,” even using the English word “model.” It was the fights between a few liberal young professors and the CAFA Party committee that had prompted the letter to Jiang Qing in the first place, so when the memo came down, the Party committee kept it under wraps. No one had expected Mao to reply personally! The pity of it was that the document wasn’t released during the Cultural Revolution. It was only afterwards that it came out and CAFA was able to start painting models again.

In 1981 I stayed on at CAFA and was teaching sketching. Our first group of models were drawn from the well-educated young people just starting to come back to the city from production teams out in Heilongjiang. We threw open the doors for the second group, the eight most important academies of fine art in China all put out “a call for nude human models.” A lot of the people who responded were university students. I got picked to go choose models, so I spent an entire afternoon looking at models of all shapes and sizes. I found out that there’s nothing quite like the human body! Every department had its own particular view of the thing. The sculpture department, for example, likes really sturdy, well-muscled bodies. The oil painting department wanted models with clear skin and good color. The printmaking department liked skinny models, because they gave really clear results. That’s just how it was back then. The experiences sound silly now, hearing them again, but they’re our history. 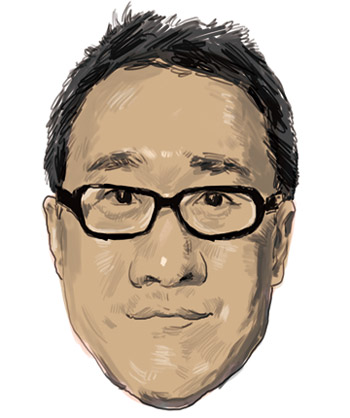 I was wondering, looking back into the 1990s, what are your feelings about the works you made then? You were perhaps experimenting with the idea of performance and video making. A lot of your works started receiving attention and exposure in the Western art world. How did you feel about the way they were shown and interpreted in the West?

At the beginning of the 1990s I did a lot of performance art. Later though I wanted to start focusing on the relationship between performance and video. That’s how I came to do the first of my works about mirrors. Mirrors have the problem of essence: how do you recognize what’s real and what’s not real in what’s there in front of you? There were three mirrors in that piece. The first was the mirror that appeared in the video. I would film it for a while and then smash it to pieces it with a hammer, but even after it had been smashed it would still reflect its surroundings. When I smashed it, everything that had been hidden behind the mirror would flow into the camera lens. The second mirror was the camera lens, and the third mirror was the screen on which I chose to project the piece. I parsed mirrors like this because of how I thought about the world when I was younger and first getting started. It was a kind of suspicion.

I felt really lucky just now, hearing Xu Bing talking about what things were like during the 1970s and 80s, because I had the good fortune to see all the art exhibitions from those times. For example, when I was a fifth-grader I saw an exhibition by the Stars, very interesting stuff. I also saw Xu Bing’s show, “Book from the Sky,” and I really liked it. What these artists were doing was beyond anything I had imagined, and like nothing I was studying in school. The world I saw after I grew up wasn’t anything like the world I studied in primary school. It was bewildering. That was where my suspicion came from. I would see myself reflected in the mirror and ask, was the “me” in the mirror really me? Hence the obsession with mirrors.