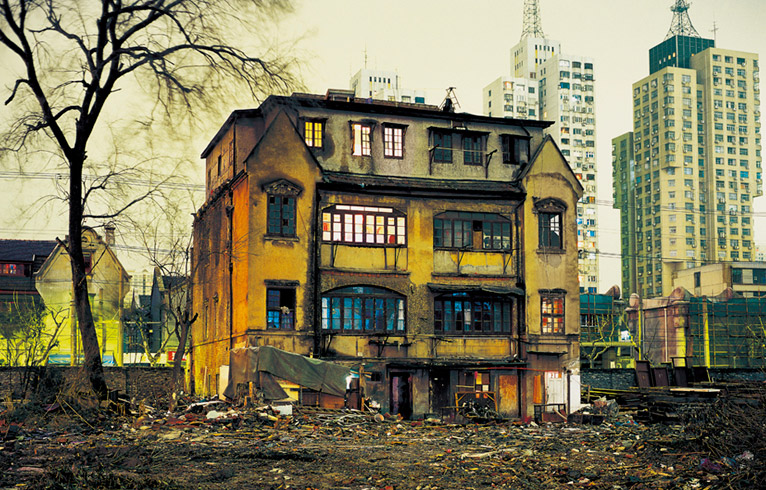 American eyes have long been prepared by popular culture to see the urban geography of Shanghai, which could be said to carry within it the residual image of Blade Runner— that 1982 neo-noir where the future is not presented in sleek, slender forms but rather arises through a process of accretion. Each passing era’s technology is laid atop all the others, like so many fragmented shells or barnacles arrayed on a vast, polluted beachhead of the present. So it is with Shanghai, where a wrought-iron lamppost of the 1920s can remain standing on the Bund in a lonely salute against the millennial skies of Pudong’s opposite shoreline, with its clamrazor, rendering-like (and all the more so for being enveloped in a perpetual carbon-based mist) façade of the Shanghai World Financial Center, and with its inverted, bulbous flower stem of the Oriental Pearl Tower. Elsewhere, draping electrical wires interlace with holiday strands of neon among those French Plane tree branches lining the nineteenth-century streets of the French Concession. (The latter’s very denomination speaks to how political history inevitably loiters for centuries, albeit sometimes lyrically, in everyday life.) If Blade Runner’s final scenes take place in Los Angeles’s famous Bradbury Building, littered and besmogged to conjure a fictional twenty-first century metropolis, even while the structure was actually built in 1893— making our idea of the future merely the crash point of yesterday and tomorrow— so it is in Shanghai that temporality can seem so jumbled to visitors that the line between renovation and ruin is sometimes all but impossible to discern. Its architecture, like time itself, is never complete; and in this way, Shanghai seems the most contemporary city on the planet.

Yet perhaps such a sense of Shanghai’s multiple temporalities is only part of a reality dawning globally. After all, envisioning the future always entails some rewriting— or more precisely, some reconfiguration— of the past. This was, as it happens, the subject of a conference I attended last November in Shanghai, for which modern museum directors and curators from around the world posed a simple question about culture and contemporary life: How should the museum understand its basic tasks when the very modern period that gave rise to the institution— the modern era’s geopolitics, subjectivity, and technology— is retreating into the past so swiftly, with its subsequent imprint on culture rapidly eroding as well? How can the museum tell a story, in other words, whose syntax seems to be falling apart? Less likely here, in the museum and in societies more generally, would be any re-writing or re-routing of history than an account of history’s increasing fracturing: as in a city, so many different trajectories and kinds of events existing in parallel, or just simultaneously, but throughout the world, and with constellations of affinities among societal moments arising in the briefest flashes.

The thought is worth considering on the occasion of the Chinese New Year. As if speaking to the city of Shanghai itself, a striking keynote for this conference was given by scholar Susan Buck-Morss, who— in a science-fictional mode appropriate for a new age— discussed the possibility for space to be imagined in terms of time, taking up the Dunhuang star chart in particular as an alternative to any Hegelian model of dialectical, linear history. In fact, she argued, our “modern” period ended decades ago with the lunar landing and subsequent transmissions of Earth’s image. For this moment signaled the conclusion of the Copernican revolution (since we were looking back at the planet from outer space and not the other way around) and the beginning of real globalization— wherein we all feel a sense of displacement, of living in a time comprising so many disparate simultaneities realized in space, with no single thread of events privileged over the others. Already during the twentieth century, Buck-Morss concluded, such a paradigmatic shift had beenunderlined by Martinique-born theorist Frantz Fanon. And yet now Fanon’s postcolonial thinking should be especially interesting since he articulated a fundamental paradox of our own age of globalization: that a separate national identity can be necessary in order to occupy a place in a transnational paradigm; and that one can subsequently feel at once a sense of increasing proximity and of distance (and difference) among cultures across the globe. 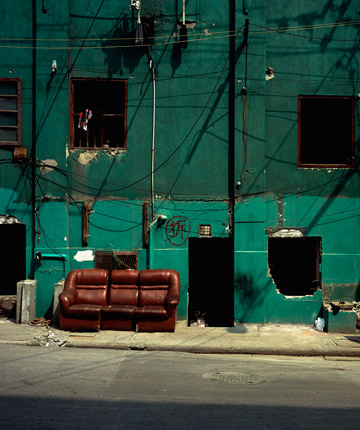 Here again, Shanghai seems for Western eyes the most contemporary urban landscape. But this distended sensibility extends from the architecture to the culture within its walls and roaming its streets— the latter of which can generate among visitors from, say, the United States, an awareness of one’s own culture being looked to— or better, at— at the same time that it is being looked past. Shanghai feels near and far at once. Everywhere, for instance, there are the clamorous, burgeoning signs of branded commerce— gone from the streets, displaced by fashion in advertisements and adornments, are the days of identical clothing older curators constantly asked me to imagine— suggesting a kind of global, popular sensibility in common. And yet, in November, one could not ignore that while Buck-Morss stood onstage in Shanghai, the G20 was also meeting in Seoul, accompanied by news of Hu Jintao developing relationships with India while Barack Obama sought out deepened partnerships with South Korea. Both leaders were apparently looking elsewhere, but largely with each other in mind.

Such paradoxes even appeared in one of the great exhibitions in Shanghai on view this fall, “Place Time Play: India-China Contemporary Art Exhibition.” Taking place at West Heavens (partly in an under-renovation dormitory originally for an early twentieth-century monastery) and organized by Chang Tsong-Zung and Chaitanya Sambrani, the show featured artists from India working in China, and vice versa, ostensibly creating a cultural channel largely independent from Western contemporary art forces. Even so, many of the great pieces— such as Qiu Zhijie’s documentation of maps made by British cartographers defining the borders of India (as well as his own journeys by foot from Lhasa to Kathmandu in shackles and chains); or Tushar Joag’s motorcycle travels from Bombay to Shanghai— seemed eloquent, remarkable turns on international languages of conceptualism in art. By comparison, at the same conference where Buck-Morss spoke, one heard Fan Di’an, director of the National Art Museum of China, championing large, figurative paintings. The paradox here is that while these canvases were presented with the promotion of national (or at least local) identity in mind, it seemed mostly directed at Western audiences and sensibilities. On the other hand, the work at West Heavens seemed to move beyond Western audiences, but only while using a language Western audiences would intuitively grasp as global conceptual art. Moving away from the West, then, the exhibition nevertheless created the possibility of exchange of another order— existing in parallel, but also in tandem, with time and space unsettled. (The show’s formulation perfectly mirrored the kaleidoscopic city surrounding the Bund dormitory housing the exhibition.) Which is to say, in so many words, that Shanghai might reflect its visitors; and its visitors might reflect Shanghai in turn.