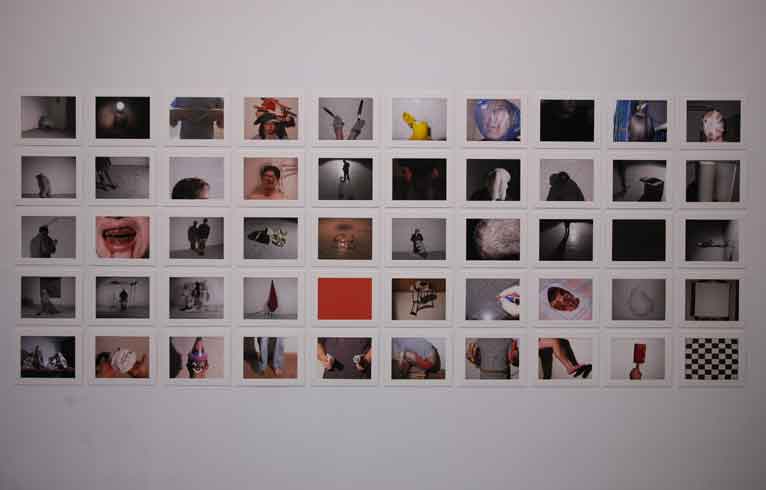 Jin Shan’s solo exhibition at Platform China Contemporary Art Institute is a live demonstration of a long-term plan. “One Man’s Island” is comprised of two component parts: fifty video “diaries” shot by Jin Shan in his studio, and a manuscript containing tens of thousands of words written during the same period. The project played out, in marathon fashion, over the course of a year. Two other marathon-esque exercises by Chinese artists also emerged in 2010: Zhou Bin’s planned performance entitled “30 Days,” and Lu Zhengyuan’s “84 Days, 84 Works of Art.” In comparison to “One Man’s Island,” however, Zhou Bin and Lu Zhengyuan’s projects were more compulsory in nature; every day, the rules dictating a work of art were themselves restrictions, testing the body and mind of the artist. Though Jin Shan did impose certain restrictions on his work, this intention materialized more in terms of the limitations of physical space. In hypothetical isolation, he designated his studio as an island, putting great effort into exploring liberation within the dimension of solitude.

In his preface, Jin Shan acknowledges that the chapters and paragraphs of his manuscript cannot possibly serve as synopses of his video works; though the two elements share the same point of departure, their paths have diverged over the course of their growth. The text increasingly directs people outwards, whereas the video consistently emphasizes an internal dimension. The resulting combination subjects the audience to a kind of unpleasant split sensation. And yet, he consciously patches up the interstice between the lexical bases of these otherwise divergent elements, making his textual descriptions conspicuously painterly, colorful, and full of movement, but on the other hand emphasizing the significance and value of text in his videos. Some titles, like A World Unto Myself and World, are rooted in broad, profound concepts, while Two Kings and Mute Magic are rich with metaphor. For most viewers, the only effective avenue for understanding the project in its entirety is the video portion. Perhaps similarly, at the exhibition site the video does not broadcast according to the temporal order of the “diary;” rather, Jin Shan has installed the fifty segments at random, using the text portion and the sense of confusion it generates as a supplement. The whole scene is reminiscent of Chen Xiaoyun’s earlier three-channel video installation at the ShanghART Gallery, Why Life, whose intention was also to inspire the audience’s direct experience of the exhibition site.

In the dark gallery, the projected images on the walls and the various monitors on the floor can either stand on their own or work in concert. Moving closer, we see Jin Shan taking turns sitting on three different stools; using his fingers to scratch at a dictionary, punching holes in it while making “tut tut tut” noises; biting down on a spoon and shaking the handle to the rhythm of his head as it bobs up and down; holding a mop between his legs and poking at the wall with its opposite end; using a pen to draw on one hand that is simultaneously using a pen to draw on the other hand; and all manner of “comedic” images surfacing from the mind of a man balancing an array of proverbial hats on his head. Observing these bizarre behaviors from a distance, you will glimpse a continuity of form at the heart of the recorded images. Though what the video portion outwardly expresses is a kind of linguistic projection of life experience, the language of the work itself is based more on the concept and form of boredom, the mindset it produces, and the activities one crafts for oneself as a result. The main point is to feature the activities themselves, and to allow these quantitative changes to give rise to qualitative ones—a concept that, in fact, is not so bizarre.     Sun Dongdong