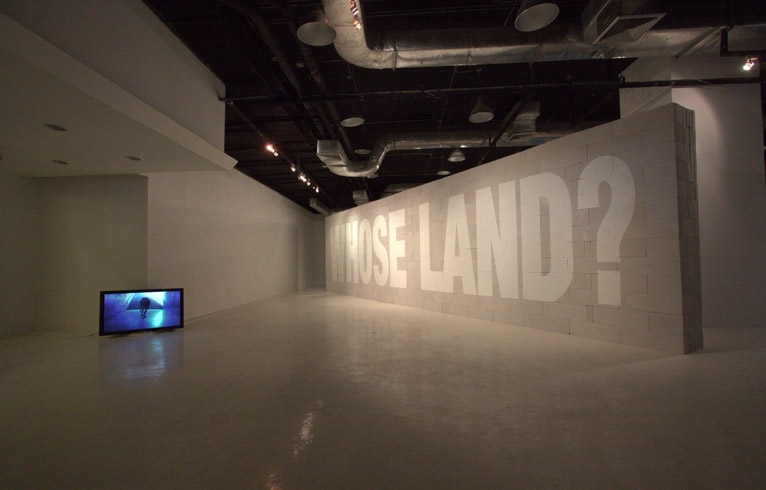 “One Project. Two Sites.” Curator Josef Ng warned viewers at the start that Lin Yilin’s project, carried out in Chiang Mai and Bangkok, would present two utterly different sides of itself. And in the end, he was right.

In the Chiang Mai countryside, Lin Yilin highlights the utopian connotations of the “Land Project,” guiding his audience to “recollect” this historical fantasy rooted in Chinese cultural tradition. The high, bare concrete wall built on the border of the Land’s paddy field stands tall like a monument. On the day of the event, some viewers stood rapt at its base or weighed themselves using the built-in scale, while others sat atop it, a few even holding fishing rods. An air of tranquility and simple joy reigned. Especially when viewed against the backdrop of its natural surroundings, the scene is almost entirely stripped of its “Land Project” (i.e. art-world) context, and the notion of “Land” is momentarily restored to its “man and nature” dimension. However, though full of imaginative appeal, these acts—surveying the view, fishing, weighing—transpire at the mercy of that high concrete wall; or more precisely, due to the existence of the wall, people’s aesthetic associations with the Land themselves begin to constitute a kind of landscape. Like the pivot point where the long wooden balance is riveted, the wall serves to tether otherwise romanticized modes of behavior to material foundations.

At Tang Contemporary back in Bangkok, there is yet another wall—similar in size to the Chiang Mai wall, though white and made of brick. On a striking diagonal, it cuts the room into two separate spaces. One space features two videos and a poster print; the poster and the video recording to its right are relics of Lin Yilin’s moments of artistic activism in response to his rented Beijing studio’s premature demolition, which occurred prior to the original date laid out in the government’s land acquisition contract. The other video records the “protagonist” returning to the scene of activism after several months, only to find the remains of the studio in mounds of dirt and ruin. Here, we can see the increasingly common process of land commodification in China with its host of conflicts and contradictions. The video recording on the other side of the wall, right by the gallery entrance (or exit) shows Lin Yilin on the sidewalk of the Champs-Elysées in Paris, handcuffing his right hand to his right foot. His body bent in half, he struggles to walk and manages however he can. None of the videos or posters in the exhibition are physically connected to the wall. As far as the gallery is concerned (from a commercial standpoint), the wall immediately catches the eye and divides the space in a way that serves only as a temporary, aesthetic ascription. The temporality that it embodies forms a kind of tacit agreement with the current system of land acquisition in China.

Lin Yilin uses two different walls to define land issues unique to two different spaces (Thailand and China). In the Chiang Mai installation and performance, he takes the greatest pains to build an aesthetic conception into an environment; whereas in Bangkok, he turns his energies towards elucidating some of the most sensitive issues China faces today. Nevertheless, in reality, the intertextual link between the two goes beyond a mere discussion of land ownership, and extends to a reflection upon the human condition. It therefore seems that these two questions printed on the Bangkok gallery brick wall—“Whose Land? Whose Art?”— are a revelation in line with Walter Benjamin’s thinking—a kind of struggle with fatalism. Sun Dongdong