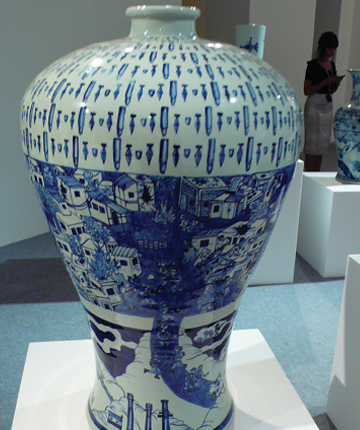 On the press bus bound for the Madinat Jumeirah and Art Dubai one late March morning, it was impossible not to overhear a healthy chorus of eight or nine Mandarin voices; perusing the materials distributed a few minutes later, names like Zhang Huan, Melissa Chiu, Richard Chang, Cai Guo-Qiang, and Carol Yinghua Lu jumped out. However electrifying our journey into the up-and-coming Arab art world, we determined immediately that, especially considering the relative absence of the rest of the non-Middle Eastern art milieu, the Chinese presence in Dubai was aching for investigation. How, we wondered, would these for-us-all-too-familiar figures contribute to the global perception of China, the art world’s longest-enduring hot ticket? (We couldn’t help but badger the reticent Omani critic next to us into teaching us the Arabic pronunciation of “China,” which, over-determinedly, turns out to transliterate as “as-seen.”)

After receiving an admirably articulate welcome from fair director Antonia Carver, clinking our fair share of spumante at the effervescent Patron’s Preview, relishing a gut-busting rumination on Canadian media-theorist Marshall McLuhan from Canadian novelist Douglas Coupland, and making the obligatory rounds of the fairgrounds, we emerged at the first stop on this reconnaissance mission: a packed “artist talk” by Zhang Huan. The event was meant to “shed light on art practices and developments across the dynamic art scenes within Asia,” but instead came off as little more than a yawn-inducing PowerPoint, beamed onto a too-small screen and translated by a locally sourced interpreter who was having trouble rendering Zhang’s Henan-accented Mandarin into the artspeak Esperanto.

Grimacing, almost, we turned our hopes for Chinese contemporary’s reputation onto Beijing regulars Melissa Chiu and Richard Chang, who were booked for a “conversation” on the Madinat’s terrace. Language wasn’t an obstacle here, but for the few in attendance (the Children’s Workshop lead by Yto Barrada next door garnered more interest from local attendees) the content was. From Chang’s unequivocal confessions— that kinetic art doesn’t “move” him, that collectors are the guardians of “truth and beauty”— to Chiu’s equivocal professions— that “China never experienced Realism”— the Chinese scene had seen better days abroad.

But of course, elsewhere, there was art poised for counteraction. In the booths, some artists (Aniwar) showed a fresh face for China, while others (Zhang Xiaogang) not so much. We didn’t manage to squeeze in the one-hour flight to Doha for Cai Guo-Qiang’s apparent smash-hit “Saraab” at the Mathaf, but we did manage to huddle up for one of Art Dubai’s most buzzed events: the unveiling of the Abraaj Capital Art Prize— established and overseen by the largest private equity firm in the region, ahem— which this year was bestowed to five separate artworks. One of these came from Lebanese artist Raed Yassin in the form of China, a collection of seven porcelain vases commissioned from the kilns of, where else, Jingdezhen. Whatever Yassin’s true intent may be, the adoration with which the work was lavished left us fighting back yet another sigh: object aside, the immediate logic of the piece seemed based on the caustic intimation that any art made in China today can only be called art because, well, it is made in China.