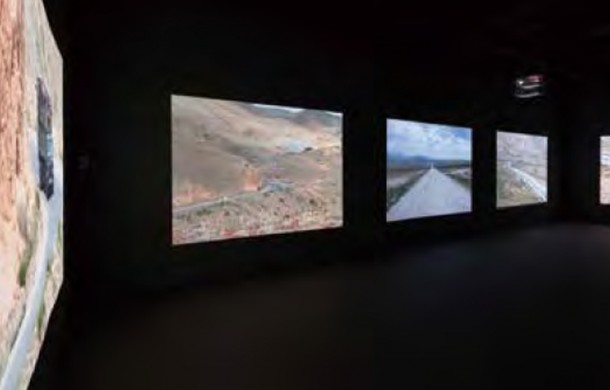 Taipei’s Hong-Gah Museum has long been the home of video art in Taiwan. The role that its modestly-sized biennial serves is akin to an observation tower. The first two editions, titled “Dwelling Place” and “Eattopia,” were jointly curated by Chen Yung-Hsien and Sean C. S. Hu, and chose as their starting points the material world and its elements. For this, “Melancholy in Progress,” curators Amy Cheng and Jau-Lan Guo continue to engage their chosen topic from a material level while also subtly expressing a desire to lead their thinking away from the material media script.

In order to show in the medium-sized space all 37 works from 25 artists and artist-groups, 16 were paired off and alternately screened— as Guo said, “the result of considerations on how to guarantee both a friendly viewing environment and a reasonable exhibition schedule.” The curators’ efforts to maximize content with limited resources, while maintaining a basic level of professionalism, reflect the “curatorial melancholy” in Taiwan, stemming from a lack of exhibition venues. Clearly demarcating creator from inviter, questions of authorship in contemporary art become a way of resolving space distribution and of enriching content. The layout and other curatorial considerations also reflect the “locality” of the exhibition. Commencing with Huang Ming-Chuan’s documentation of the spatial alterations of Taiwan after the end of martial law, the exhibition goes on a journey through six works selected from international entries, finally pausing at Kao Chung-Li’s photochemical-mechanical installations in response to ideas about “technological objects” and “video systems.” Only then does the linear passage of the exhibition lead into the contained spaces of the next gallery. It is worth considering that “Melancholy in Progress” might also be said to take as its starting point a video work by Taiwanese architect Hsieh Ying-Chun. More precisely, the voluminous documentary footage that Hsieh has filmed of post-disaster communities under reconstruction is just outside of the narrow definition of what is video art. Thus, this exhibition not only responds to its own substantive prompt; it also responds to the practice and premise of a “video art exhibition” by including non-works. By also mounting a document exhibition, the curators avoid a purely material based display of the medium, showing other facets of video art.

Nevertheless, when the viewer has reached the end of the exhibition, it is difficult not to be drawn to the five-channel video installation by Kyrgyz artists Gulnara Kasmalieva and Muratbek Djumaliev. Here, it is as the essence of video has followed the development of all media art, closing itself within art history. As the curators have said, “this exhibition is not intended to reveal new trends in video, but its conversational capacity.” In the simplicity of the selected videos— humble technique and an absence of high-definition— one sees a strong resistance to the video equipment arms race, and in inner content and outward form, an even more comprehensive rebelliousness. When the viewer arrives at the five-channel video installation and the exhibition’s ontological “generational melancholy,” it is impossible to forget the need for a certain kind of exhibition experience, one formed after prolonged sensory stimulation. We live in an image-rich age, led by our sensory organs. If when we reenter the exhibition space and slowly take in audiovisual landscapes created by these essentialists we cannot consider the exhibition as a work unto itself, then it is nothing more than a series of miniature film festivals. As the same audience exists for both contemporary art and film industries, this unease at the exhibition’s modernity is fully exhibited in “Melancholy in Progress.”

With its selections from multiple cultural subjectivities, “Melancholy in Progress” accurately dissects the sense of loss that the process of pursuing modernization has brought upon an earlier iteration of modernity once full of promise and now muttering to itself. The fluctuating modernity of today is a force pulling forward contemporary communities and certain principles of decision-making— only by not allowing backward glances or hesitation can there be an optimal next step. That lost modernity, meanwhile, continually forces the intellectual to halt progress in order to reflect on every historical moment. Such is also the relationship between art and exhibition. (Translated by JiaJing Liu)