HONG KONG HAS provided the documentary and conceptual material for much of MAP Office’s practice since 1995. Here, we unfold chronological the set of tools that guided us to use Hong Kong as a cutting-edge laboratory for an innovative appropriation of the city/territory.

Starting with a research-oriented platform on territorial development, we set up a series of three publications engaged primarily in research into the urban conditions of Hong Kong, Mapping HK (2000) interpreted the city as a synthesis of the local particular and the global abstract through territorial dynamics and extreme scenarios. Presented at the 7th Venice Architecture Biennale, Mapping HK set up vector lines to define the unique specifics of Hong Kong and how to intervene in the density. In this “dynamic labyrinth,” one main category of space is the appropriated, which wavers between private and public uses, defining a set of strategies for MAP Office to cultivate appropriation for cultural projects.

HK LAB (2002) constructed this broad image of Hong Kong as a site uniquely mediating the abstract and particular through a set of case studies carried out in conjunction with a series of collaborators. The background for this book is the unintentional experiments in urbanism that characterize Hong Kong, experiments that rarely if ever lead to evolving future strategies but rather reinforce a bubble of self-delusion as the city pushes forward: continually absorbing new layers and experiencing ever greater degrees of saturation, Hong Kong is, in this model, best summarized as fast, dense, and smoky.

HK LAB 2 (2005) adopts similar strategies of alternating photographic and textual essays. Opening with an exploration of the “corridor city” and closing with an analogous “lift city,” the book literally explores, along multiple axes, the mechanisms of transition within these paradigmatic interior spaces. Having established a geography of living, this volume proceeds to tackle tactical urban practices through a number of dialectic pairs: control and deviation, and surface and structure, all of which are in constant contact and conflict in an ongoing process of hybridization.

Transferring academic research into a real context, Hong Kong became MAP Office’s primary site of performance and exhibition. Hong Kong is Our Museum (2004) refers to an initiative to make public MAP Office’s living-working space in Sheung Wan, an older neighborhood downtown already characterized by radical mixed-use from street level to rooftop. Transformed into a museum for one night, our rooftop became the site for a series of group exhibitions and screenings. Video projections loop in a number of key areas and screens become new windows, invading an imbalanced economy of production and consumption.

Runscape (2010) engages with a free narrative that explores the history of running, forms of mapping, data, space and time, multiple dimensions, language, and the body. Here Hong Kong is transformed into a performative space as the performer defines new routes within the built environment. Within the unlimited division of urban structures, this oblique translation generates an extremely open-ended and fluid approach where new territories can be explored as we engage the sensorial impact of the performer though the grid. 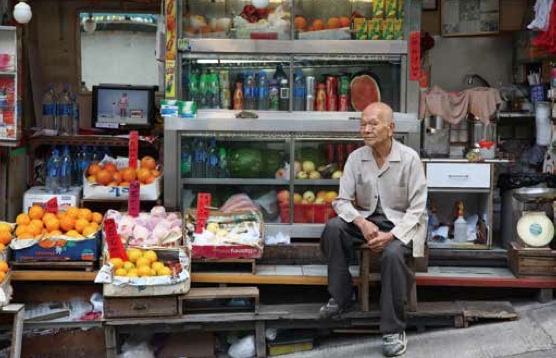 After ten years of rooftop screening, using the blind walls of surrounding skyscrapers as screening walls for public viewing, CITY-O-RAMA (2010) extended the initial project in the district of the Central market. Counting on the extreme permeability of traditional commercial spaces, MAP Office produced a new map of the district to link up a series of video projects as a new alternative route. A selection of ten video works was set in dialogue with ten borrowed spaces forming a temporal exhibition for passersby to interact with. Together they formed a substitute to the current museum vacuum but also reflected general concerns about the global impoverishment of the cultural environment.

The concept of Hong Kong Is Our Museum arose from the fact that the city lacks a dedicated contemporary art museum. Yet this first assumption rapidly evolved in two directions: when living space becomes a site for production and exhibition, installations are interacting with domestic space, while the territory of the personal simultaneously absorbs the external urban environment.

In Hong Kong, the conditions for the museum are everywhere. Spaces are waiting to be appropriated, and the public is eager to explore new domains where the history and culture of the city make dialogue with new objects and artworks. Design events such as Detour, the Mobile M+ exhibitions, and a number of satellite events during ART HK serve to prove that the concept of a “Museum Without Walls”— a return to the community, free of charge— has a long way to go in Hong Kong. (Translated by Connie Kang)