In the state of Kerala in southern India, the Kochi-Muziris Biennale opened its doors on December 12, 2012. The picturesque old colonial town of Kochi, or as the locals call it, “God’s own country,” welcomed over 150,000 visitors in the first month of the exhibition. Many works of the 94 participating artists were made on location and are obviously inspired and influenced by the rich cultural past of this tropical, historical port town and the ancient mythical past of Muziris, India’s answer to Atlantis. India’s first biennial is a significant, exciting marker of the growing importance of Indian art and the cultural and socio-political changes in India itself. A better place and time for India’s first biennial is hardly possible, at least for those able to look beyond the flaws.

Over the past few decades, India’s art scene has been gradually transforming, and several Indian artists, galleries, and curators have come to be internationally renowned. A great example was India’s National Pavilion in 2012, the first in Venice’s 116-year existence. But inside India, contemporary art still has a long way to go. In a country inhabited by more then one billion people, there is very limited support from the government and only one contemporary art museum (NGMA). The contemporary art scene has to be seen against the background of both a relatively short history of modern art and a strong traditional craft culture.

Kochi-Muziris is the ambitious initiative of two Kerala-born artists, Bose Krishnamachari and Riyas Komu. The artists, part of the so-called “Bombay Boys,” wished to establish a contemporary art platform in India, something that was lacking until now— aside from the rather unsuccessful attempts of the Triennale-India in New Delhi from 1968 till 2005, critics of which had said it was too in-crowd and not open enough for the public, something the Kochi-Muziris Biennale is trying to avoid from the get-go. Conscious decisions were made to host this first edition not in one of the cultural centers of India, such as Mumbai, Delhi, or Bangalore. Art lovers would have been reached more easily, but the organization was shooting for a broader audience, one that is not familiar with contemporary art. As a sleepy holiday resort popular with both Indian and foreign tourists and possessing both empty warehouses and a rich cultural history, Kochi was the perfect option.

The old colonial warehouses once used for cloves, pepper, coconut fiber, and cardamom are no longer empty. In the historical center of Fort Kochi and Ernakulam a variety of 14 different venues have been rebuilt and turned into exhibition spaces. From the main venue, the Arabian Sea-facing colonial Aspinwall House, to the café-meets-gallery hotspot Kashi, the city delivers exotic locations and wonderful stories of a forgotten past and perilous situations. Some of these venues are between dilapidation and renovation, and you have to step over sleeping dogs and cows before you can enter— and when you do, you might be invited to stand somewhere where “the ceiling won’t collapse.” At Moidu’s Heritage Plaza, a helpful volunteer leads me up termite- infected stairs by candlelight— the power is out. The sight of handwritten work introductions on A4, half-installed works, and empty crates quickly become a familiar view.

This seeming unprofessionalism is the biggest strength of this biennial. The “work in progress” approach is integral to the exhibition. The messy yet fascinating surroundings are a great inspiration for the many artists who have developed their work on location in Kochi, and also for the two curators, who have tried to give maximum freedom to the artists so as to turn Kochi into one large open studio where artists collaborate together and with local craftsmen. The merging of cosmopolitan Kochi and mythical Muziris is always present— be it in narrative, memory, or material. Take, for example, the work of Australian artist Dylan Martorell, who collected sounds from Kochi during his stay here. He placed local spices on top a rotating speaker playing his recordings, filling the small rooms with particularly Indian smells and sounds. Elsewhere was Amar Kanwar’s The Sovereign Forest (2010-ongoing), one of the highlights of last year’s Documenta. For the first days of the Biennale, Kanwar stayed by his work’s side, as there was no security yet. Due to its dealing with the political and social impact of the mining industry in the little town of Orissa, this multimedia installation of books, films, and rice was heavily debated among the visitors, as were the beautiful lenticular prints from Maya Arulpragasam (better known by her stage name M.I.A.) a bit further down the hall, which were built by local craftsmen. Local Kerala workers also made three sculptures for Dutch artist Gert Jan Kocken, whose work can be seen at the Pepper House. Kocken asked them to create “the perfect man,” according to rules describing the face of Christ from eighteenth-century Swiss scientist Johann Kaspar Lavater— a rather important detail that only became clear when the accompanying text was mounted months after the opening. 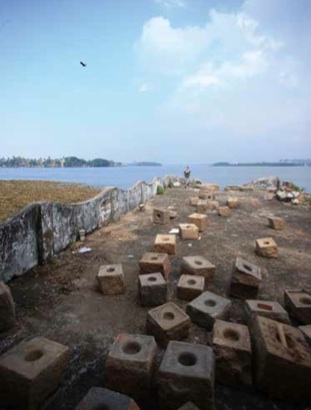 Another strength of the Biennale is its involvement with the city. On opening day, all schools were closed. The vendor who sells me my 15-cent coconut every morning is proud. “I had never seen anything like this, like modern art. I prefer the traditional Kathakali dancing but some things are very nice. Like the stones that I forgot, but that remind me of my youth.” The stones he refers to are the 117-year-old spice grinders collected by Sheela Gowda and Christoph Storz. Once installed in every decent kitchen floor in India for grinding spices, the stones became unnecessary and were aimlessly left on to the streets with the advent of cheap electric grinders. Covering the venue grounds inside and out and all the way to the waterfront, the artists return the grinders not only to this former nexus of the spice trade, but also to the realm of historical visibility.

The commitment was also evident when the giant charcoal drawings on the market square by Australian artist Daniel Connell were demolished with coconut shells just days after the opening. The reasons and perpetrators are still unclear. Fingers point to other artists from Kerala not included in the biennial, or extreme leftist groups in the area who are fighting against Westernization, accusing the exhibition of corruption and abuse of money. Despite the commotion, Connell received a lot of support— a dozen protesters from the city sat for days with signs reading “Do not attack art.”

This defense is just one of many illustrations of the ongoing changes in the attitude towards contemporary art in India. He who is able to look beyond the flaws shall see an ambitious and powerful biennial in a country where the infrastructure for art is largely yet to be constructed. An art event of this scale was missing so far in India; its arrival has opened up a broader conversation about the role of contemporary art in a changing society. But the withdrawal of funding promised by the Keralan government, and other fiscal troubles, have left the question of a second edition up in the air. For now, let us hope the biennial will, in the vein of Bilbao, have its own “Kochi Effect.” Before the Guggenheim was built, no one connected the sleepy Spanish town with top-shelf art, but it has now emerged as one of Europe’s cultural hubs. Here in Kochi is a biennial that was about art itself and not the art market. That, along with the enormously ambitious scale and diversity of works, is alone worth our praise.