Twenty years on from its first edition, the 7th Asia Pacific Triennial of Contemporary Art (APT7) continued to provide audiences with an unsurpassed opportunity to view a diverse selection of work by artists from across the Asia Pacific region. As a core program of the Queensland Art Gallery of Modern Art (QAGOMA), the APT has been instrumental in asserting QAGOMA as an industry leader in this field, with its continuity within the institution feeding into the development of its curators’ practices, a world-class collection, and an audience increasingly interested and literate in contemporary art from this area.

Started in 1993, the APT emerged out of an Australian political climate colored by then- Prime Minister Paul Keating’s concern with strengthening economic and cultural ties with the Asia Pacific. This was part of his “big picture” view for the nation, which acknowledged the geographic position of Australia within the region, the shifting axes of power globally, the changing face of Australia’s cultural demographic in light of migration, and the independence of Australia’s own history— including reigniting the republic debate and pushing for Aboriginal land rights. Set amongst this, the first APT boldly assumed a political position in positive support, with the ongoing exhibition series designed to actively participate in the imagining of an Asia Pacific geo-political construct through fostering relationships and making significant cultural and economic investment in the region.

The regional specificity of the APT has also made it an unusual bedfellow of the lineup of prominent recurring exhibitions. Its preference for a “regional” rather than a “global,” “national,” “local,” or “thematic” framework has proven to be its strength, allowing for a more open-ended consideration of how geography is defined while providing prominence and scholarship to a historically marginalized region. On this front, APT7 is no exception. Like the region it attempts to represent, the exhibition sprawls across the majority of QAGOMA’s two buildings, offering a veritable smorgasbord of mediums, approaches, and concerns. The works may be explored as discrete islands, or intuitive connections may be drawn between them to create constellations of meaning. Unsurprisingly, ideas of cultural exchange, conflict, diffusion, and mutuality arise throughout. 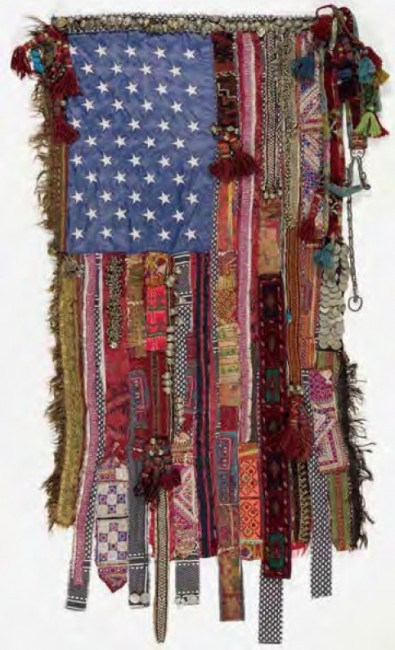 The complex nature of such issues is most strikingly captured by Vietnamese-born, US-based photographer An-My Lê. While at first the photographs from her series “Events Ashore” (2005–ongoing) appear visually incongruous with the surrounding works— which readily suggest their geographic specificity through easily read appropriations of cultural references on a bombastic scale— Lê’s work provides a subtle and moving reflection on the contradictory reality of a globalized world. Produced on her worldwide travels with US Marines and Navy deployed for training, her carefully framed juxtapositions of landscapes and people tease out the histories that they both embody and the psychology of anticipated military action. Other memorable works included Korean artist Sangdon Kim’s absurd sculptures, photos, and video that carefully balance humor and pathos to distill the artist’s engagement with local communities; the Taiwanese artist Yuan Goang-Ming’s technically mesmerizing multichannel video Disappearing Landscapes – Passing II (2011); and the Iranian born, US-based Sara Rahbar’s lovingly crafted Flags, which poetically merges competing national identifications into single objects.

Allowing the audience to pause for a more focused reflection on particular regional specificities is the inclusion of two smaller exhibitions by invited co-curators— a curatorial tactic that was first employed in 2009 with a presentation of work around the Mekong River system in Southeast Asia. For APT7 the areas considered are West Asia— defined as the vast region from Western China to Turkey traversed by the Silk Road— and the New Britain and Sepik regions of Papua New Guinea. In “O – Now: Traversing West Asia,” co-curated by November Paynter, photo media is heavily represented, indicating a sophisticated use of this medium by artists across West Asia. In Egyptian artist Wael Shawky’s Telematch Crusades (2009) a historical event from the Crusades is playfully reenacted with local school children to consider alternative perspectives of the past, while Kazakh artist Erbossyn Meldibekov’s Family Album (2011) is effective in its simplicity, placing family photographs taken in front of official buildings and monuments during Soviet rule beside those taken at the same place after independence. The previous structures have been replaced with figures of local significance, displaying how cultures symbolically define themselves and the struggle for Kazakhstan to assert independence.

Co-curated by Martin Fowler, the presentation of work from the New Britain and Sepik regions of Papua New Guinea are bold, colorful, tactile, and instantly arresting. Placed prominently in the entrance foyer, a commissioned spirit house tambaran by the Brikiti Cultural group of the East Sepik region scales the wall to the height of the Gallery’s top third level, articulating the important relationship between art and architecture in Papua New Guinean culture as well as displaying the artists’ experiments in new mediums— acrylic and board supplied by QAGOMA. This is accompanied by an array of commissioned masks traditionally used for performance. These include monumental Mandas masks by Katnanat Elison, which evoke dramatic plant-like forms and are awe-inspiring in their size, sensitivity of material, and in the imagination of how they might appear when in use.

Strongly based in tradition, the question of the “contemporary” nature of the works and practices presented from Papua New Guinea would provide an easy rhetoric for criticism. However, such a simplification would avoid the larger and more difficult questions surrounding culture and its preservation today that their commission, collection, and display provokes. Customarily ephemeral or site-based— due to the nature of the materials and the works intended use as architecture or in performance— the commodification of these objects raises questions about colonization and cultural independence. Such issues require a careful negotiation between cultures and the different balances of economic power, infrastructure, agendas, and understandings that exist between them alongside the importance of visibility. It is also an issue that Australia is yet to fully reconcile in relation to the cultural practices and the surrounding contemporary art market of its own Aboriginal people, an issue poignantly expressed in Richard Bell’s seminal work Aboriginal Art, It’s a White Thing (2003).

These issues are critically reflected in the adjoining room through Graham Fletcher’s paintings of retro chic interiors with Pacific ethnographics as objects of decoration and desire. Continuing his interest in how periods and perspectives have shaped the understandings of Pacific cultural objects, Fletcher’s paintings clearly ask such questions, albeit leaving the answers up for deliberation. Nearby, paintings and a video work by the Aboriginal artist Daniel Boyd are an exciting resolution of ideas and experiments in new media that the artist has been working with over the last few years. Utilizing dots to build compositions and as a lens through which to see the world, his works provide an alternative consideration of the politics of the dot in Australian representational practices. The presence of work by other Aboriginal artists— of varied gender, generation, urban and regional centers— provides a more holistic view of approaches by Aboriginal artists today.

The archive also emerges as a recurrent thread throughout APT7. This is seen both in the practices of artists— such as the collective Ruangrupa’s fictional archive of an underground Indonesian punk band from the 1970s and Raqs Media Collective’s presentation of their own twenty-year history— and in the inclusion of artist talks across the triennial’s duration. The emphasis on the archive is poignant in its reflection on the importance of the historical record, on what is preserved and what is forgotten—  suggesting, somewhat, that the APT will be best understood over time. Having displayed an encouraging responsiveness to each iteration’s triumphs and failings, the APT is an ongoing work in progress, with APT7 continuing to build a bigger picture of the Asia Pacific region and to stimulate significant debates. It is difficult to think of another exhibition program currently running in Australia that has the weight and importance of APT, one that makes the viewer feel a part of living history.