THE 1966-1976 Major Events Pavilion, located in Anren, Dayi County, Sichuan, is built across a river and thus serves as a footbridge— hence it being called the “Museum-Bridge.” The museum houses relics from the Cultural Revolution collected by Mr. Fan Jianchuan. Everything about this building, from its shape to its name, hints at a sense of timidity. Architect Yung Ho Chang did not intend for the exterior of the building to betray the strong ideological semiotics hidden inside. Instead, he chose a cross-section of popular Chinese architectural stylings from the Cultural Revolution, which were formed under heavy Soviet influence. His design proposes a neutral and calm vantage point from which viewers may examine this special period in history with coolness and impartiality. In Chang’s own words: “This project recalls the development of Western Classicism in China and explores the incorporation of classical elements in contemporary design.” 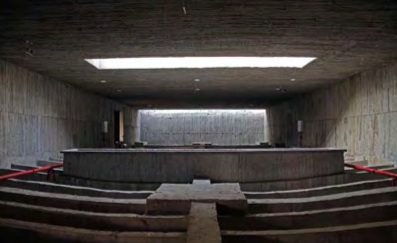 One of many museums in Anren, the Museum-Bridge is by no means the most eye-catching. The exterior is simple and plain, with the key architectural theme being balance. The entire structure is supported by slanted columns. Interior lighting comes from skylights cut into the ceiling, while the space below the bridge is used for exhibitions and performances— organized in part by Fan Jianchuan. The broad and flat roof terrace lends a sense of restraint and humility that is particular to Asia, and helps the structure maintain a painstaking distance from its surroundings. Meanwhile, Chang purposely avoids smoothing out the roughly hewn concrete exterior; in fact he takes advantage of local laborers’ lack of expertise with concrete to further enhance its rough character. Texture is impressed into the outer walls with molds made from bamboo strips. While the design may be seen as a rebellion against the elegance of Classicism and the architectural stylings of Socialist Realism, it is perhaps more apt to view it as a tribute to the Brutal Realism once popular in post-war Europe. The coarse concrete structure is reminiscent of Le Corbusier’s cluster of modern buildings in Chandigarh, India, the magical designs of the Barbican Arts Centre in London, or perhaps even the cold and unrefined modern concrete monsters of Brasilia. “We hope that the Museum-Bridge’s Brutal Classicist Architecture’s exterior, with its inherent sense of timelessness and ravage, can bring visitors to seek out the truth of history.”

For this project, the language of architecture was tuned to perfection. The architect operates with deft aloofness, letting the form of the building appear independent of the social backdrop from the Cultural Revolution, when in fact it conforms in a very fundamental way. He blurs the boundary between the building itself, the surrounding public space, and the interior exhibition space, instilling ambivalence in the architecture. It is at once a building, a bridge, and a path. It becomes, simply, a quiet and understated space that lightly flirts with history. Chang forgoes the political leanings often seen in architecture, quietly encasing richly ideological exhibitions in a shell of concrete with complete impartiality, letting its existence speak for itself. (Translated by Frank Qian)