DURING HONG KONG’S colonial period, the British administration was unwilling to cultivate a cultural mainstream for fear that it would threaten the position of the government. As a consequence, a divide-and-conquer strategy characterized the allocation of cultural space and art funding in post-1960s Hong Kong. This approach was intended to preclude the formation of a mainstream ideology that could challenge the authority of the colonial government. Whether that ideology originated in Western modernity or traditional Chinese culture was unimportant. The government supported middle-class tastes in modern and classical Western art, as well as translations and interpretations of foreign works. Indigenous creativity never received the same treatment. The result is a scattered, passive, disassociated artistic plurality— not the sort of plurality that contains a hierarchy or the potential to form a mainstream. The government’s so-called plurality is in fact a euphemism for dispersion and lack of focus.

DUE TO THE high price of land in Hong Kong, it is impossible for cultural venues to support themselves (the Sunbeam Theatre, which stages Guangdong-style operas, is an exception). The government funds almost every facility and supports virtually all of the performing arts. In this way it implements its covert cultural policy of dispersion. For example, the government refuses to make policy exceptions for cultural reasons because any such exception would entail some sort of public cultural evaluation. Moreover, the government employs stringent bureaucratic supervision procedures to resolve cultural controversies in order to prevent them from becoming public discourse.

Responsibility for Hong Kong’s art and cultural policies is scattered between the Home Affairs Bureau (for public arts and cultural services), the Leisure and Cultural Services Department (for venues and programs), the Academy for Performing Arts (for training), the Arts Development Council (for small-scale funding), the Commerce and Economic Development Bureau (for creative industries), the Development Bureau (for protecting cultural objects and architecture), and the West Kowloon Cultural District Authority (for its large-scale cluster of cultural sites and programs). In the past five years, total annual arts and culture funding has averaged HKD three billion, the lion’s share of which went toward protecting sites and paying the salaries of public functionaries. Arts troupes received only HKD 200 million, most of which went to large, established groups.

THE HOME AFFAIRS BUREAU is responsible for supporting flagship arts organizations. The number of these organizations has remained stable at nine for several years, contributing to a phenomenon of under-competition. The leftover funding for new and second-tier arts organizations is administered through an ostensibly fair but rigorously controlled process, producing a corresponding situation of over-competition. This environment has led the flagship organizations to remain on the beaten track in matters of style. They are unable to foster high artistic standards or sustained indigenous creativity. In contrast, the ideas generated by smaller troupes are innovative but short-lived; they lack the means to form stylistic schools or trends. In the United States, the cluster of theaters on Broadway spawned the off-Broadway movement, allowing a fringe culture to coexist with a mainstream one. Hong Kong’s major art institutions cannot establish mainstream standards, and small-scale troupes cannot reach critical mass. The big players sometimes appeal to vulgar tastes, and the small players sometimes achieve elegance. But by and large they reduplicate each other’s styles— this is what the government calls diversity.

In the twenty-first century, Hong Kong has adopted Western models of a creative sector and art market. These concepts primarily help upper-echelon arts organizations and providers of large-scale programs, such as the Leisure and Cultural Services Department and the West Kowloon Cultural District, roll out government-subsidized popular entertainment. As a consequence, small-scale performing arts troupes have been pushed further into the periphery.

WITH AN AIM to dissipate the cultural burden and strengthen financial supervision and performance evaluation, art funding is provided on the basis of short-term, endlessly shuffled grants for individual programs. The funding goes to registered groups rather than individual artists. Thus artists are compelled to form organizations, which requires a physical address— not cheap in Hong Kong! An organization must also have a bank account and some sort of administrative team; it must write a prospectus, formulate a budget, and submit application materials during limited windows of time. Those fortunate enough to receive funding must provide regular reports and accounts of verified expenditures. Artists run themselves ragged in order to receive as little as a few thousand HKD in a process mockingly referred to as “bureaucratizing the Muse.”

Deficit funding is the principle behind this subsidy system. The government always overestimates income from ticket sales and other fundraising sources and makes corresponding reductions in funding. Usually, performing arts troupes only receive about 30 to 40 percent of their funding targets. With no means of making art their livelihood, artists and administrative staffers rely on piece-work income from performances or dip into production costs. There is no way to financially itemize the materials and labor that go into the production of art, so these efforts become de facto volunteer work. Also, the funding is allocated on the basis of originality. Reproducing past works is not allowed, so small performing arts troupes have no means of reenacting previously successful performances, further enfeebling their capacity to survive in the market. Small troupes with no permanent location have to rent rehearsal space and make do with what is available. With no places to store props and costumes, they often have to abandon them after each performance. The single-program system for allocating resources has made producing art in Hong Kong extremely costly and wasteful. 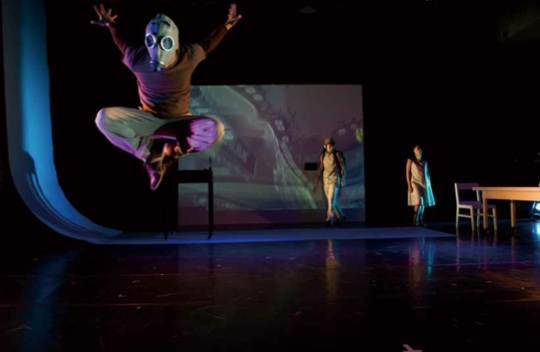 Due to space limitations, harried rehearsals, and minimal income, young artists often exhaust their creativity and give up within a few years. The demand for administrative work, rehearsal space, and storage services leads to the emergence of resource centers. However, the government has not deemed these resource centers— which naturally become hubs for people and information— a valid source of advocacy for increased arts funding. Consequently, the government has not provided any administrative support for arts agencies, artist coalitions, or other arts centers.

THE GOVERNMENT, BECAUSE it controls the available space and produces or procures large quantities of arts programming, has become Hong Kong’s biggest arts agent. It is both buyer and provider. In order to produce satisfactory performance evaluations, the government puts downward pressure on both ticket prices and the number of public performances. As a consequence, attendance rates average as much as 80 percent. But the multitudinous government programs with low ticket prices limit the pricing and scheduling flexibility of medium and small performing arts troupes, preventing them from achieving market viability. As a consequence, performing arts troupes have turned to providing arts services as a means of generating revenue. These services include educational programs, community exhibitions, and so on. Unless they concoct something really original, they end up in competition with freely available government services, and often see minimal reward for their hard work. For example, one arts group partially funded by the Arts Development Council organized an arts education activity. When they attempted to collect a HKD 500 fee from participating schools, the school teachers protested that government arts activities are provided free of charge— so why should they pay for activities organized by a private arts organization?

The erroneous idea that art is freely provided by volunteers makes it difficult for performing arts troupes to survive. Other public institutions, such as the Urban Renewal Authority or the Jockey Club, do not ordinarily provide funding for the arts, nor do nongovernmental foundations. Such organizations, naturally wary of attracting ideological controversy for funding pure art, only support local arts activities. When artists visit schools to give speeches, they cannot even receive compensation for their transportation. In addition, Hong Kong’s arts education is lacking, contributing to the weak public dialogue about the arts. As a consequence, small performing arts troupes struggle to sell more than a hundred or so tickets to their performances.

IN ORDER TO earn a livelihood, Hong Kong art workers supplement their work with side jobs as well as teaching or community service work. In order to be innovative, they must have open minds, seize inspiration from their environment, and rapidly convert it into a fundable project. This process preserves the creative edge of the Hong Kong arts world. But because each application for funding requires a brand-new idea, many projects are different for the sake of being different, making it difficult for stylistic schools or trends to form.

Overseas arts awards and honors are concentrated in the fields of literature and visual arts. There are fewer such prizes for the performing arts. Traditionally, winning a prize means earning some governmental and civil support, but the Hong Kong government usually pays little attention to these awards, at most giving artists with strong reputations overseas a few extra points on their funding applications. For example, in 1994 novelist Dung Kai-cheung won the Unitas Fiction Writing for New Writers, and his novel was published in Taiwan. Only after this positive reception of his work in Taiwan did he begin to gain some fame in Hong Kong. The installation artist Pak Sheung Chuen has also won foreign awards, and has continued to live abroad to earn a livelihood. Even Beyond, the innovative pop music group, failed to survive during Hong Kong’s prosperous 1980s— it was in Japan, after all, that lead singer Wong Ka Kui prematurely died in 1993. There are so many similar cases that one can only sigh in exasperation. (Translation by Daniel Nieh)