WHAT IS COMMONLY accepted within the industry as independent Chinese animation has only been in existence for about seven or eight years. If we include the earlier days of Flash animation, it would maybe grow to a dozen or so years. I had a conversation with a young independent animation director once. He said that in the 1980s, a director from the Shanghai Animation Film Studio would be rewarded a RMB 10,000 bonus for each successfully executed project, which at the time was a significant amount of money. The financial support from the government drove Chinese animation into a mini-Renaissance. Animation professionals at the time were all on government payroll and did not want for money; today, however, independent animators pay out of their own pockets for the production, to submit to festivals, and to promote their work. Occasionally their work will be collected or win award money, but the vast majority sink their savings in and get little if any returns out of the effort. On a material level, China’s independent animation industry cannot yet stand on its own and support itself. The majority of the artists have other occupations or sources of income that allow them to continue animating. The art itself is time consuming and costly, and animators struggle to make a living even in countries with successful animation industries. Several of my friends work as independent animators in the UK. They have their own small companies or studios and bid to work on MVs, live performance videos, and TV ads. They live on profits from these endeavors and reinvest the profits into their own independent animation projects. The more successful directors among them are usually very busy with commercial activities, and those who can maintain a long-term interest in independent animation are few and far between.

Even though the Chinese independent animation industry has not achieved financial independence, the First Shenzhen Independent Animation Bienniale has made the organizers’ intentions quite apparent: a yearning for independence. Having that yearning does not, of course, mean that the animators have achieved independence of the mind. Without understanding the subject and the point of achieving independence, the practitioners would have an empty outer shell devoid of a soul, and that independence would have achieved no significance. The biennial exhibits some of the earlier animations in Chinese cinematic history, including Rumble in Heaven, Tadpoles Looking for their Mother, and The Nine Colored Deer, reminding viewers of the industry’s one time prosperity. Rumble in Heaven, a segment from the popular novel Journey to the West, was meticulously made, and its creation fit the propaganda needs of the politics of the time. It did not need to be financially profitable, as it was created under a planned economic scheme. Therefore, as a whole, the project is a far cry from the parameters and goals that today’s independent animators work with. Simply put, there is very little that connects Rumble in Heaven with today’s independent animation projects. No matter how prosperous China’s animation industry once was, today’s independent animators must escape the mainstream animation’s formulaic developmental mentality; instead it should aim for a freedom of thinking that is free from politics. It needs to blaze a trail with more diverse language and styles. 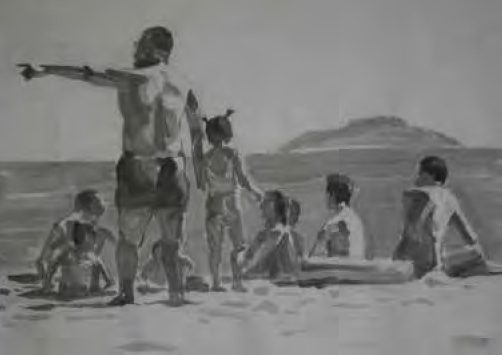 The use of animation in contemporary art is no longer a novelty. In the main sub-fields of interactive art, generative art, virtual reality, and Internet art, animation occurs with surprising frequency. If we went strictly by the portion of the piece that makes use of animations, most of these forms would qualify as animation projects. However, the Bienniale does not touch upon such pieces much, nor does it make any effort to outline or clarify animation’s role in contemporary art. In fact, in some of the works selected for exhibition, animation was but one of the many techniques used by the artist in creating the final product. For instance, the video project submitted by Chen Zhuo and Huang Keyi created a 3D model of a statue of Chairman Mao but then used a video camera and special effect techniques to create the final product. Chen Shaoxiong did not consider his work as animation either, which is better described as a series of ink paintings shown on a projector. Sun Xun, widely seen as the symbol of independent Chinese animation, also submitted an installation piece in which animation was only one of the components. It is apparent that the all-encompassing contemporary art genre can no longer categorize based on medium alone, as we have been doing with traditional art forms such as ink painting, oil painting, woodblock printing, and sculpture. In contemporary art, the various mediums are intermixed; no longer does a work avail of just one form or material. It is impractical for a particular medium to stand alone under the umbrella of contemporary art.

True independence requires more than a simple declaration. To become truly independent, one must constantly introspect and undergo a long and taxing period of separation and isolation. For the younger generation, gaining independence from parents and guardians is something to look forward to. Such is the case for independent animation in China, which has gingerly stepped into its adolescence. (Translated by Frank Qian)