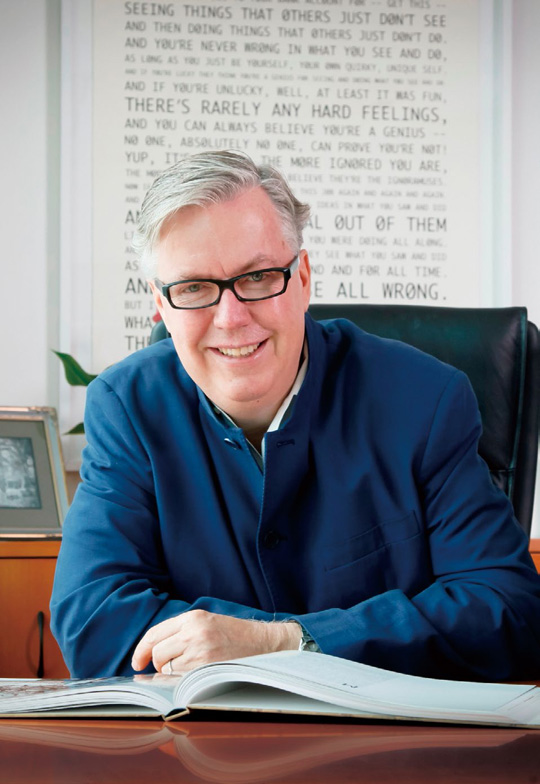 LEAP Why did you decide to accept the position at M+?

LARS NITTVE What really attracted me to the job was that the ambitions here were quite uncompromising. On the one hand, they are trying to create something that sets really high standards. At the same time, they don’t want a repetition of existing models. They don’t want another Tate, MoMA, or Centre Pompidou. They want something to challenge the existing models. If you work long enough in museums, you know there are things you want to change and see what could be changed or challenged. For me it was interesting to simply be destabilized. Going to a place I don’t know so well is an extreme form of destabilization. Chinese contemporary art had a presence for me. But as a museum director you usually don’t develop new in-depth expertise in anything anymore. You have a more superficial and strategic relationship to many things, but you don’t develop deep knowledge about new things. When I was asked to do be the director of M+, it was not because I had the reputation of being an expert in Chinese contemporary art, but because I had enough expertise in terms of museums and was able to realize museums. I could use everything I’ve learned in different countries, places, and institutions in a way that I could add something to the knowledge that exists in Hong Kong and the region.

LEAP What was your vision for M+ and the West Kowloon Art District when you arrived?

LN When I took the job, one of the clear visions I had was that it shouldn’t be only an art museum, but a museum of visual culture. Art has become a concept that embraces other cultural forms. There are a lot of movements in the border areas between different cultural categories where art could function as an umbrella zone. That’s a general tendency in the last 20 years. I’m also aware that in different parts of Asia, the categories are not as given as they are in the West. Again and again in Hong Kong you meet artists who are also well-known designers, architects, advertising professionals, photographers, teachers, and so forth. The main reason is that these cultural categories are not given by nature. They are actually Western cultural constructs. The further away you are from the metropolises of the West, the freer you are to move between different roles. We want to embrace that kind of fluidity, instead of being afraid of it, and make it the core of the museum.

LEAP What did you think of the culture in Hong Kong when you first moved there?

LN Hong Kong is a culturally complex place, in limbo, a space between difference positions. You don’t get much firm ground in Hong Kong. It’s constantly wobbling and shifting. The first layer you discover is that it’s a place that sits between two histories: the Chinese history and culture, and the Western history and culture—a problematic colonial history, with all these tensions over the years. This brings out the first complication: that double cultural identity. Then you have Hong Kong’s more recent history: it seems like for the first time, people living in Hong Kong have started to think about it as a home, as a place they would stay. Before the handover, it seemed to me that Hong Kong was only a place of transition— you come there thinking that you will go away one day. Most people who came actually stayed, but they did not think of it as their home. Hong Kong in itself didn’t really develop its own culture and identity— this only started to happen in the last decades. When you start to think about identity, you also start including and excluding, which applies to both ideas and people. When you look at the Hong Kong Chinese population, it’s not so homogenous. It’s not only southern Chinese. There are a lot of powerful people who have their roots in the north and came after 1949. So there is an interesting south-north relationship. Layering these things on top of each other, you have a very complicated cultural map. Then you add the political complications of Hong Kong on top of that. For example, there is freedom of expression but no universal suffrage, which creates a strange political system. But of course, we who work with art actually like complexity. As human beings we almost always strive for stability and certainty, to know and to understand. But when you engage with art, you have to give up all these things to get closer to the art. You know that you will never fully understand. There’s no definite meaning. We will never fully know what the artists mean or intend to do. I’m extremely attracted to Hong Kong because I can see the complications. The city is almost like art, because it’s so unstable and complex.

LEAP What are your plans as curator of the Hong Kong Pavilion at the Venice Biennale?

LN I’m working with Lee Kit on this project, which is a great pleasure. It was really a very personal choice that he would be the artist to represent Hong Kong in Venice. There have been two or three ways of choosing the curator and the artist, and every time it ended up in lawsuits and legal proceedings between the ADC— the Hong Kong Arts Development Council— and the people who applied and didn’t get the job, which led to the curator and artist having very short time to prepare for the presentation. So this time the ADC decided that it would, like most countries in the world, commission an organization. Of course they would choose an organization that has the greatest chance to make an impact, so they contacted us, and we accepted the offer. As you know, there have been very strong reactions from artists and curators in Hong Kong, which is unfortunate. I don’t think many reacted to the choice of Lee Kit. The main target was the ADC because it supposedly didn’t consult enough and the process wasn’t seen as transparent enough. We were subject to part of the criticism because they thought we should not have accepted the offer. I think this is actually the right way to do it. The Venice Biennale is the only opportunity that Hong Kong has to make an impact for an artist in a major place overseas where you can control the situation, make your own exhibition, write the catalogue, and do everything around it. It’s the only opportunity we have outside Hong Kong. It’s important to be as smart as possible, to optimize that opportunity and get the most out of it. I don’t think it’s fair to the artists and the local art scene to leave it open for anyone to bid and to have a jury that you can’t be certain will make the right judgment— to leave it to chance. If you look at M+ internationally, it’s not only a museum but also, if you like, already an international art brand. We should use the fact that M+ has international recognition and probably the Hong Kong artist that’s most well-known outside Hong Kong. Thirdly, we happen to have a director-curator who also has an international reputation. M+ has a very professional team that can compete with the best nations in the world in terms of communication and putting things together. It would be ridiculous to gamble and say: there’s this young curator or this small promising organization, let them do it, it should be fair and open. Hong Kong should be absolutely clear in trying to just optimize the opportunity. This is how they do it in most other countries, especially in the West. I think the criticism is mainly about two things. One is the general criticism of the government’s lack of transparency. The ADC is not the government but is a government-type agency. The other is job opportunity. One might take a look at the young curators and say: oh, a job opportunity has been taken away. But it’s a price we have to pay in order to do the best for Hong Kong and Hong Kong artists. It’s very unpleasant, because I don’t want to be in a position where I’m in conflict with the artists.

LEAP Yet you are in that position.

LN Yes, when I shouldn’t be. Not all of the artists who signed the petition are that angry. It’s not as clear an opposition as it seems to be. I hope we reach a point where the sense of opposition isn’t there, when there’s an understanding that there’s nothing in it for us. It would be so much easier for us not to do it because we are still a small organization and have a lot of work on our plate anyway. Enormous amounts. But this is almost a must, a responsibility, something we should be doing. Maybe it will turn out that we are not doing it well. When we evaluate that, we might not do it next year. But that’s a different story.

LEAP But a lot of artists are questioning the allocation of resources in Hong Kong, the choice of Lee Kit, and so on.

LN It’s a very simple logic, especially when you have an art scene with very little name recognition internationally. Venice in itself is a huge group exhibition. Speaking from experience, if you try to make any kind of group exhibition in your pavilion, the chance of your visitors remembering what they see goes down immediately. It’s a big mistake to divert attention. It’s the only chance for each of the artists to be seen at Venice, but none of them would benefit from it. They would be lost in the noise of Venice. In 1993, I curated the Sweden, Norway, and Finland pavilion. It had to be three artists, and you could see how [the voice of] each artist was lost. But if you do one artist and do it very well, the artist has a chance to be recognized. After all, in culture, you always have to make choices— who plays the solo violin at the concert, for example. I have no doubt that it’s the only way to do it. And over time, many of the important artists will have had a chance. As a curator, I don’t benefit from choosing one artist or 25 artists. I just propose what I think is the best use of our resources. It’s not my job to make everyone happy. (Interview by Wu Jianru)