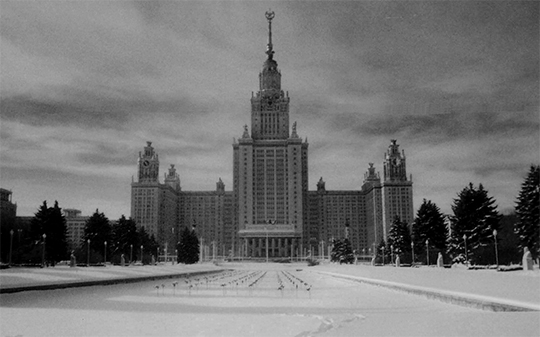 Riverside. The sense of waking up in a silvery shower of leaves; lying on a cool bed of brambles in a forest. Water trickles by my sides all around; screeches and hoots periodically emanate from the greenblue light twinkling. My presence emerged from the wrinkled hands of a man in a foreign country, in a city of summer, in the delicious center of the century: the new world, proclaimed upon a dais at Tiananmen, had only existed for 4 years. The ways of seeing which had emerged from the old world, framing the endless construction, drilling and yells of the new: I was but the image of this interplay, as were all men and objects of my era. Moscow, this camp of youth; in these halls thronged with silvery voices; yes, this is the door between nothingness and somethingness which I chose to open, the spot at which I emerged as a thought. Moscow University, by a canal on which golden youths from a new era sailed down. In this time of endless optimism and endless fear: of people’s palaces and large gray blocks filled with screams, boulevards littered with ice-cream wrappers, which led to alleyways filled with broken glass.

Yes, I was a sketch of a world glimpsed briefly: one that maybe never truly existed. The perspective through which I was seen was necessarily hazy and impressionist: the image that I was, above all aspirational. The lofty and noble spires of black ink slashed across my canvas as they never did in Moscow: on my surface, no tin cans, no wailing infants, no coats smelling like wet dogs, no melting snow stained black with gasoline. Simply air, and sunlight, and the dream of a new world.

I sailed through the world; through dusty atriums, through exhibition halls, through the grubby hands of private collections. Yes, for more than 50 years, I floated through a world; as the world gathered dust on the newly varnished marble columns that had been built at the same time as I. I, whose identity was a strange mingling and confluence, a moment in time when worlds collided without the sound of a crack or crash; when eyes undimmed by the sight of endless pavilions opened themselves to observe new buildings: the Moscow University, its grandeur signaling the revolutionary world: the new world.

At the auction; I was being raffled off by a corporation named after that most noble and frozen of rivers: the Sungari. The Beijing in which I now found myself was a fragrant, pregnant dream: similar, and not-similar, to the dream of architecture that I was born to.

From a dusky suburb warehouse, I was transported to here, the bright, well-paved highway of human life; a site of constant whizzing, of cans and bottles thrown from windows onto side-roads, with the occasional punctuation of beggars, of accidents, and the broad panoply of tedium. Yes, we are going somewhere. Are we there yet? That’s the most childish question. We are going to the occupied part of the earth—the economy.

Certain cities seem to be accumulations of buildings: Beijing once was. Today, due to a process called“revolution,” this city is above all a coagulation of streets, roads, pathways: a bloody tangle, a human knot.

On the broad roads of the town, I studied in passing the men in rickshaw-taxis, the vendors of fruit, the young businessfolk in black, shrivelled bicycling pants, the blank-eyed wanderers. Yes, you too are my brothers. Yes, your salted and sultry flesh is also one part of the divine. Yes, these blackened gulches crisscrossed by rivulets of saliva and fresh rain are also part of the cosmos, of the home, of my home, and therefore would it not be logical for me to melt into the pavement, the buildings, the economy, as a lover? Do I not love the world? … Well, I am just part of the world. An idea and an object at the same time.

Skulking away from such thoughts—after a long hibernation, the exposure of sunlight made me uncomfortable, I meandered onto darker corridors, the leafed and quiet streets, those large, calm terrains into which my presence was as a drop of water into a bottomless sea. And as I was swished and swashed through the substance of World, I found to my relief that I was gently being deprived of my sense of self, of the sense that my existence was set apart from that of the others, from the object-world. Until now, I must admit, the only real attempts I have made to integrate myself into the worlds which I encountered have been the half-hearted attempts to earn money, and more compellingly, the desire to exist within the thoughts of the others—certain others, not all or even many of them. And, to observe landscapes, landscapes from which my own essence was invariably extracted: Manchuria in winter, the tropics, the metropolis with her dusty waterfront stretches, with her grand towers and turrets, with her clanging bells and the warehouses and shops of street level. Enormous forests, walls of granite, graveyards and tombs in front of which to genuflect; concrete suburban pavilions filled with laughing, squid-eating painted faces; the railway station of a small city, hucksters and peddlers taunting each other; in front of large athletic stadiums, with soldiers and the elderly ambling past; in the intense observation of a particularly interesting face; in a boat, sailing through canyons at night, illuminated by the moon and the thoughts of those other persons who had voyaged through here; yes, this Chinese terrain was vast, an endless embrace.

A red-velvet backdrop, strolling observers tumbling past me; a sign with a price in RMB by my side. This number: a number inconceivable to my antecendents. My identity, my use, my role, somehow had been completely transmuted and changed, even as the scrawls across my surface were carefully preserved. A scuffed carpet, a tawdry atrium, machines blowing humid moisture through the air, various beady-eyed men in tennis shirts: impossible to comprehend these persons and their motives. One of them will take me home: or perhaps not; it doesn’t matter, for my Self has already been renamed by a number.

Moscow University: a dream of summer; it would carry me through the world for decades to come, a dream of calm, a dream of a white alabaster tower lit up from within by a dream of collective life, glowing with optimism. Even as I found myself surrounded by rubble, overlooking tables scattered with bones and surrounded by drunkards, as I found myself perched above empty cabinets, as the air wafting past me smelled foul and noxious, the vision of youth and boldness, of sinuous bodies waiting to uncoil, of stone gardens… yes, this would sustain another 60 years…