He An opens his cryptic solo exhibition with a list of terms positioned next to but also including its title: Preface, Night or with Its Daytime, He Taoyuan, EVA00 Prototype, Armenia, Bride, Love Child. These are the titles of the construction-material installations that make up the exhibition, though the words seem intentionally disconnected from the objects they label. This is an exhibition that demands to be viewed with press release in hand, and yet the composition of the interpretive text suggests that interpretation itself may be a trap. He An notes a dialectical engagement between the fiction of the work (the titles) and its reality (the objects), and encourages free narrative association between the terms involved: perhaps an Armenian bride makes a love child, or perhaps He Taoyuan visited Armenia at night to inspect a prototype. With this permissive grammar in place, He An’s exhibition statement launches into three distinct streams of what can only be called mumbo-jumbo: a theoretical stream that bounces around text, rhetoric, time, and legend; a superstitious stream that rambles on about earthly stems and dragon taxonomies; and a personal stream that tells the story of the artist’s grandmother stroking a dragon in a moment of mortal danger. He gives us permission to explore the connections between these ideas and their real world referents, but ultimately seems to prove the absurdity of our storytelling endeavor completely. 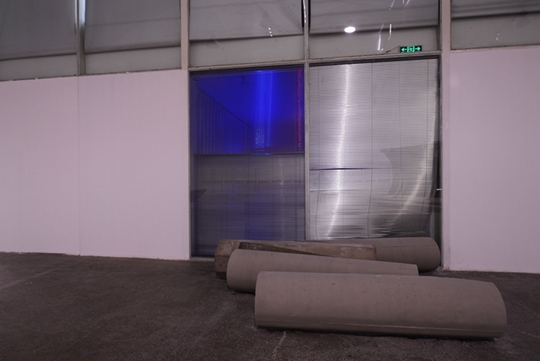 But the failure of explanation is the success of the exhibition. In the grappling match between semiotics and phenomenology, experience wins big. He An knows this; he speaks of the spiritual or religious atmosphere produced by objects that try to explore time in physical space. By turns industrially seductive and psychologically repelling, the constellation of seven small spaces created by seven forcefully anchored objects make for a maddeningly difficult intellectual maze, but they punch hardest on a tactile level. And indeed, these objects hit hard. 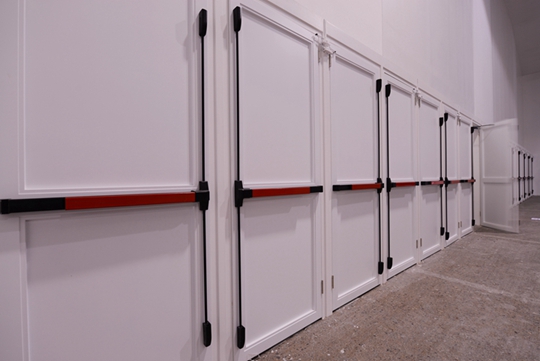 Along one of the long walls, 20 doors open and close over the course of a randomized 20-minute loop, creating, according to the artist, fragmentary slices of time. The amateur semiotician will read, in their ballet, a black and red cross (perhaps an Armenian reference) at the intersection of each pair of doors built to the dimensions of the artist’s body; the more curious viewer might find instead a rhythm or pace with which to move through the exhibition. Facing this installation, we are flanked by two semi-tubular constructions that read as components of He An’s high-powered light installations, like the focused reverse light cannon Hubble. One is dark and ribbed; the other is segmented with a wood interior broken up by black panels. Moving further in, an L-shaped rack of container panels encased in a protruding steel frame plays a spatial tug-of-war with finely calibrated, thin, angular metal sheets with blue edges leaning against the wall. These projects resolve themselves in space to varying degrees; some feel more balanced, more composed than others. But He An is at his best when dealing with constraints not only as subject matter but as a physical condition—witness the brilliance of his exhibitions at the diminutive Magician Space, or his installation at Nanjing’s Sifang Museum. Two further works here steal the show. In one enclosed room in the deepest corner of the space, white powder surrounds the bases of two walls, while several dozen dark blue E-shape panels are stacked high in one corner with two thick electric cables running out from them. In another enclosed room, blue and red lights flash through Venetian blinds behind a glass wall—the experience is almost entirely inaccessible, save for four concrete pipes, some squared off and some overlapping, on the floor outside the glass in the main space. Moving in and out of these rooms we are finally convinced to discard the commentary entirely and hand ourselves over to the work. We emerge, bruised and battered—and far from enlightened—but all the better for it.