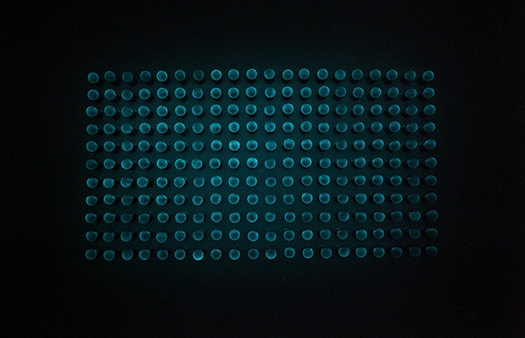 “Illuminated,” curated by artist Guo Hongwei, is the fifth exhibition held at his nonprofit Gland Space. The exhibition, born of the artist’s personal creative experience, embodies the eclectic accumulation of his work as it has evolved over time. This rich, inclusive presentation has a strength of vision that surpasses the effects of his solo work, but his art and curating are inextricably entwined—one cannot compare different forms of practice on the basis of emotional impressions.

In recent work, Guo has brought attention to the conditions of the gallery space itself, and what it contributes to the viewer’s experience. This is evident in his focus on the physical element of light. An object becomes a work of art not because it inherently possesses certain characteristics, but rather because the artist mobilizes the audience to feel and experience it as such. Light, as a material that alters experience, enters Guo’s inquiry here. In recent paintings he places equal importance on light and color, considering how to more effectively use and intervene with this element. According to the actual volume and material of the object he is working with, he paints coat after coat of varnish to increase the volume of the corresponding image; then, when the exhibition is installed, he personally adjusts the lights in the space. Guo sees the physical conditions that influence the audience’s experience of a painting as his material just as much as anything else.

Many curators today treat exhibitions as discursive proposals, investigating questions within the contemporary art system and commissioning artists to produce works in response to these questions. When artists curate exhibitions, it is often in order to emphasize the collective identity of artists themselves within this system. Guo Hongwei, instead, begins with questions that arise during his own creative process. For him, curating an exhibition is a way to invite artists to create and realize a kind of interactivity among works. The result is an experience unlike most other exhibition contexts.

The central topic of “Illuminated” is light, so Guo started by searching for light-related works. In the process he relied on checking in with his personal creative experience in order to sense other artists’ grasp of their own work. This meant that, in selecting artists, he was able to avoid basing choices solely on superficial appearance or visual symbols. Working in his own space, adjusting the layout in consideration of the viewer’s experience is also easier and more intimate.

Even more importantly, as an artist, Guo is able to discuss other artists’ plans for their work and recommend improvements while still respecting the integrity of their creative concepts.

Aaajiao’s work for this exhibition is a video based on the effect of magnetic interference on a black screen. Guo himself presents a similar proposal by taking several black flat-panel displays and splicing them together. The different monitors, due to differences in brand and model, provide different presentations of black, juxtaposing subtle gradations in what is perceived as the same color. Both artists cooperate by placing their work on the same wall, making us aware of the flexible alternation between the roles of artist (implementation) and curator (management). That is to say, the powers of the curator do not interfere with the artist’s conceptual expression, but rather capitalize on his ability to make possible contrasts and connections more vivid.

Meanwhile, Guo Hongwei positions another of his own pieces on a wall about four meters from Chen Wenbo’s oversized oil painting of a chandelier: shadows projected by several small lamps mounted on the surface of the wall form an image just as big as Chen’s painting. Guo’s work does not form a direct light source for Chen’s, but rather uses the gentle ambiance of the light bulbs’ diffuse brightness to shine on the painting and complement the rays of light Chen captures in pigment.

Jiang Pengyi’s work is inspired by a photography series in which he covered objects in wax mixed with phosphor powder and exposed their weak fluorescence on film over an extended period of time, allowing the objects to glow in the resulting images. Guo suggested that the artist use the same method again without necessarily employing photography; Jiang decided to scatter phosphor powder over every corner of the exhibition, with piles of it accumulating on every work. Once the exhibition opened, the prolonged exposure of the powder to natural and artificial light resulted in a sort of “midnight movie”: when the gallery closed each night, the phosphor glowed in the dark, casting an eerie glow over everything—except the shadowy areas where viewers stood for prolonged periods of time.

The experience of this exhibition—natural, alive, and brimming with unexpected moments—is indebted to its circumstance: the work of an artist functioning as curator but still very much remaining an artist. Guo Hongwei carefully thinks through and personally engages with the conceptual propositions of all of the works included; his is a curatorial practice that makes the exhibition a space of moment of community and exchange. （Translated by Katy Pinke）