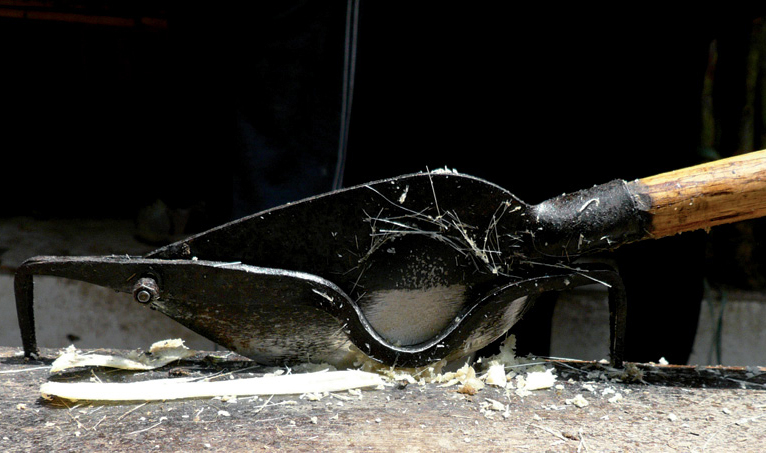 The concept of “design for the poor” was put forward in 2006 by artist Qiu Zhijie and a class of his design students at the China Academy of Art. It refers to the ways people at the bottom rung of society use design and manufacturing to meet the challenges of their everyday problems.

DURING THE 2006 Shanghai Biennale, one of the students in Qiu Zhijie’s photography class at the China Academy of Art (CAA) snapped a photo of a small stool set atop a small motorcycle for use as a makeshift child seat. Everyone in the class thought the stool was a neat idea. By coincidence, the Biennale theme that year was “Hyper Design.” The seat, created by some grassroots inventor, barely deserved the term “design,” yet it owned a vitality professional design lacked. Qiu believes design can overvalue comfort and aesthetics at the expense of relevance to everyday life. He encouraged his student to take the topic on as a graduation project. Since then, Qiu has expanded on the original idea, making it a group project for his students, one he calls “design for the poor.”

“It’s low-income, poorly educated people who create and use ‘design for the poor.’ Their creations are practical, thrifty, useful, and tailored to their surroundings. They reflect their creators’ interests, as well as their pursuit of beauty, weaving imitation, appropriation, and transformation into every corner of everyday life. It’s hard to even identify the original creator.”

In 2007, on the back of their previous work, Qiu led the students in developing the concept of a “Museum of Design for the Poor,” and in forming a “CAA Design for the Poor Research Group.” Composed of members from the Research Center of Visual Culture and the mixed art, new media, and industrial design departments, the group’s goal was to carry out large-scale social surveys, gather data and interviews, then discuss and analyze the results, which they released at the 2008 Guangzhou Triennial’s Huangshan Workshop. In June 2008, “Design for the Poor” exhibited in a “showroom” format at the Guangdong Museum of Art. In April 2010, under Qiu’s guidance at the Total Art Studio, mixed art deparment students from two different years conducted their own survey in Beijing. The survey, the most extensive to date, involved a painstaking gathering of information in the old city center, a village at Beijing’s urban edge, and along a bus route through dense residential neighborhoods. The plan for the survey grew beyond Beijing to include cities as far away as New York, with designers from around the world participating.

Data collection, including photos, registries, object collection, and interviews with creators and end-users. Collected objects are classified and assigned numbers. Surveyor fills out ten completed questionnaires and object description forms, with ten sketches of the collected objects. Upon phase completion, group members select the ten best examples of “design for the poor.”

Going deeper into the information from Phase One, each participant collects data and interviews on an individual object, and writes a 1,000-character discussion of design for the poor.

Surveyors question an ordinary individual about their physical and mental needs, and record responses in written, audio, and video forms. The surveyor creates his or her own work of“design for the poor” in accordance with the responses of those surveyed. It should be a targeted design that is of practical use to subject. The surveyor gathers feedback from subject and records the process. At phase conclusion, a “Most Moving Design” prize is awarded and discussed.

Points to consider
How do different groups of people balance the pursuit of conformity (i.e. a “proper” life) with nonconformity (giving expression to their ingenuity)?
Useful objects, junk, design that turns trash to treasure, and works of art: What is the relationship between these concepts?
In what circumstances does a DIY ethos add value to a work?

Each surveyor chooses one community, interviews its residents, and ascertains their understanding of art. The surveyor draws on local resources, using the community’s unwanted objects or materials donated by residents to design a “public work of art for the poor” for the community. The designer must obtain local residents’ consent for the work of art, gather their feedback, and obtain their commitment to the work’s long-term upkeep. When the opportunity arises, the participant must return to the community for further interviews, in order to monitor the work’s status.

The research group organizes an open forum on design for the poor, inviting prominent designers and both the creators and users of the surveyed works to participate in a theoretical discussion. Afterwards, they develop a plan for a live work of performance art titled “A Play on Objects Designed for the Poor.”

A Public Plan: The Mailbox Boat

During the 2010 survey, the “Drum and Bell Tower group” focused on the heart of Beijing’s old district. Residents there lead relatively stable and satisfactory lives. Combining knowledge with passion, some of them have created amusing little objects. Strictly speaking, they’re not necessities, but they make life that much more interesting and pleasant.

After a series of interviews and consideration, the survey group was able to lay out what really worried the residents: forced demolition of their homes. The survey group started to cast its gaze towards the rubble from the demolished homes, and the address plaques that used to hang outside them. Qiu listed off a few of the more famous “demolition works,” and set everyone to work looking for something to replace the plaques. The group decided to make something out of mailboxes: mailbox gazebos, mailbox memorials, mailbox drum towers… Qiu asked them: what’s the most obvious public space around, besides the Drum Tower? Everyone’s answer? Houhai lake. So it was decided: they would make a mailbox boat.

The group fashioned a wooden boat keel in Qiu’s workshop, on which to hang mailboxes. At the same time, the students started collecting wooden mailboxes. Because they couldn’t find enough, in the rush to finish before they left Beijing, they tried using old wooden boards to make mock mailboxes, which ended up feeling all wrong. The group talked it over. They felt that collection was part of the essence of the work. There couldn’t be anything fake about it. So they all ordered a set of aluminum alloy mailboxes online, and exchanged them for residents’ old mailboxes. Even after they left Beijing, they continued this exchange, expanding their mailbox search to Hangzhou and the students’ hometowns. At the end of May 2010, the boat, covered with mailboxes from every corner of the country, finally took to the water in Beijing.