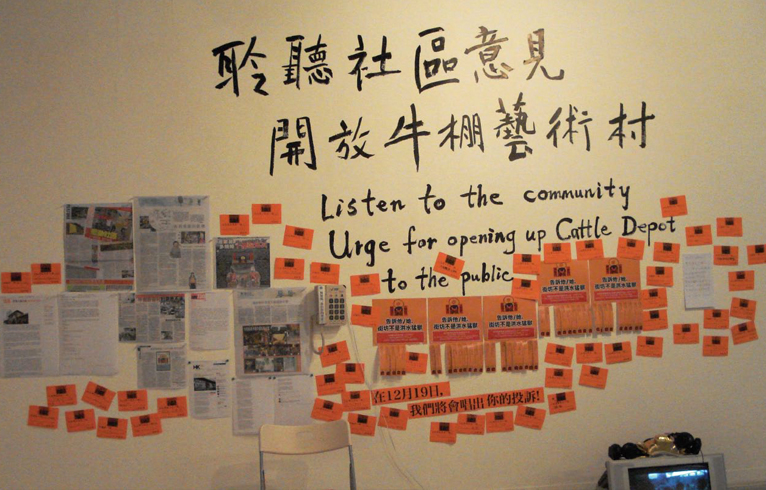 “Against Easy Listening” is New York-based curator Steven Lam’s second of two exhibitions for 1a Space as part of his curatorial residency with the nonprofit organization. The title of the show, which includes artists from Mainland China, Hong Kong, Japan, Korea, and Vietnam, lays out the premise clearly: it’s an opposition to simple or passive approaches to understanding sound and the act of listening. This opposition politicizes the works selected: each is meant to challenge our received ideas about sound, and by extension in some cases, our perceptions of language and music.

Take for example Hong Kong artist Anson Mak’s Ghosts in the Heart (2008-2010), which consists of a video shot on Super 8 accompanied by two separate sound field recordings, one done in 2008 (on a set of headphones to the left of the screen) and the other in 2010 (on headphones to the right). The video documents activities that occur during the ghost festival, most notably the burning of paper items as offerings to the dead, which functions as a narrative climax in the piece. Having two different soundtracks forces the viewer to consider the impact sound has on our perception of the moving image, and to examine the content of the field recordings independently of the images they accompany. In the 2008 recording, the sound seems to be a straightforward field recording of an evening walk through a Hong Kong street. The 2010 recording sounds as if it has been manipulated through editing, layering several field recordings on a single track. It sounds more robust, demanding more attention, and ultimately overtaking the image as the focal point of the work. 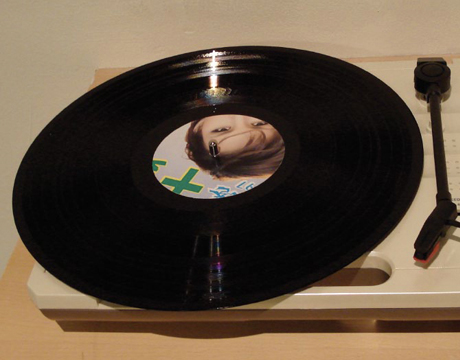 Cambodia-based Viet Lê examines boyband culture in three sets of photographs. Viet Q (platinum) (2008) mimics the look of hit records framed for the wall of a record producer’s office, where staged images stand in for the music. One can easily imagine the pop hits that these groups would produce if they were real recording artists because boy bands have proliferated in different countries around the world, becoming a shared part of pop culture. Each of the three sets of photographs is shown in multiple, enhancing the idea that these are images made for mass consumption. Elsewhere, a video by Mixrice takes a playful approach to language and music. In Mixlanguage (2004), popular phrases spoken in Korean are taken out of context and juxtaposed in a song played and sung by two men: “Hello, how are you?” “Don’t make inferior goods.” “Is there this kind of thing in your country?” “You are good looking.” The effect is absurd, causing these unremarkable statements to become comic, even dadaist.

In Japanese artist Lyota Yagi’s Vinyl (2005), an ice record cast from a silicon mold plays on a record player. (Three young children at the exhibition saw the turntable and one asked, “Is this the kind of machine you use to listen to old CDs?” In one generation, the once widespread technology has become a relic, taking on associations with the past. The very appearance of a record cues a certain level of nostalgia.) As the record plays, and the ice begins to melt, the quality of the sound changes. Here, a record, which is supposed to capture sound in a somewhat permanent fashion, has no pretensions to any sort of permanence. Once the ice melts, the listening experience is over. One presumes that a silence follows. Doretta Lau