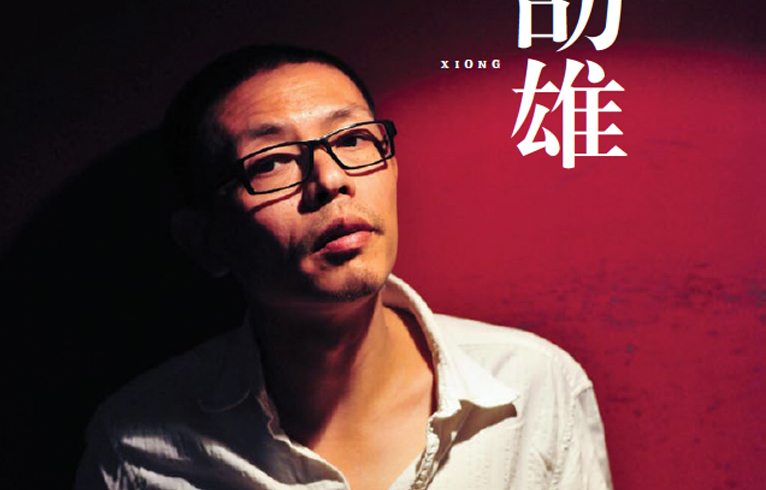 AUGUST 8, 2008, was a major day in world history. Coming at the end of a seven-year countdown, it marked the moment when Beijing revealed its ambitions and accomplishments to a watching world. Hours before the drums beat out the final ten seconds in the lead-up to the 8 p.m. opening of the Olympic Games, three men— one Chinese, one Japanese, one Korean, marched from a road just beside the airport expressway in Caochangdi, into a sprawling gallery space. One held a national flag in light blue, another a white flag bearing a permutation of the five-ring Olympic insignia. In the center, the third man held a laminated sign atop a simple wooden pole, announcing the delegation as belonging to “Xijing.” This was the beginning of the Xijing Olympics— sixteen days of collaborative antics from an international collective known as the Xijing Men (a group consisting of the artists Chen Shaoxiong, Tsuyoshi Ozawa, and Gimhongsok) riffing on the international spectacle transpiring all around them.

The name “Xijing”— meaning “Western capital”— is an instantly recognizable joke in Chinese. Bejjing and Nanjing are, of course, the “northern” and “southern” capital, while Tokyo (pronounced “dongjing” in Chinese) uses the characters for “eastern capital.” Not only to the Chinese speaker, but to the reader of Chinese characters, which is to say, the literate East Asian, the combination boasts an immediate, funny resonance. Xijing is a place that very well could, even should, logically exist, and yet does not. Indeed, the name has been used at various points throughout history to describe cities now known by other toponyms. By claiming this non-existent place as their imagined home, these three men, dressed in the generic navy blue suits of any Olympic delegation, were declaring the absurd.

The video I Love Xijing: The Daily Life of the Xijing Presidents, which offers the closest thing the group has to a manifesto, opens with a sequence titled “The Historical Transformation of Xijing Territory.” A hand, Chen Shaoxiong’s, draws the contours of East Asia’s borders as a voiceover in the once-international language of French reads a piecemeal history of Xijing, cobbled together from Wikipedia entries into a textbook formulation about how and where this territory came into shape. The narrative moves from Xi’an to the Bohai Sea, back inland, out to the Korean Peninsula, back inland again, then down into Vietnam and out to Kyoto. The narrative postulates the fictional idea of a “Xijing people” who undergo historical transformations as their land rises and falls, waxes and wanes, prospers and suffers. Alternating the image of Chen Shaoxiong’s map is another of the same table covered in rice, beat into position, separated, and reassembled by a ruthless spatula.

This is the spirit in which the rest of the Xijing project unfolds. Elsewhere in the same video, we see sections devoted to agriculture, the constitution, urban planning, education, defense, and the economy. In the “defense” section, the three “presidents of Xijing” wield elaborate guns made from vegetables, in the style of Tsuyoshi Ozawa’s signature work. In the “urban planning” section, they alternately cut into a watermelon, as the voice—belonging to the adolescent daughter of curator Hou Hanru— explains the way Xijing divides and structures its cities in a diction immediately reminiscent of any mayor of a rapidly developing city in Asia. In the “economy” section, they stamp logos onto napkins, printing currency in a desperate rush to stymie economic crisis. Each section is masterminded by one of the three participating members, each resonating most clearly with the individual member’s work. The interesting thing about the collaboration then becomes the way in which the three coalesce, not by subsuming individual style, but by accepting that of another.

This collaborative urge is one of the key strands in Chen Shaoxiong’s work. From his earliest days as a member of the Southern Artists Salon, to the groundbreaking urban interventions he performed as part of the perennially loosely structured Big Tail Elephant, and on through a collaboration as recent as his current work with artist Liu Ding for this year’s CIGE art fair, Chen has never been afraid to work together with colleagues of his own and other generations, nationalities, and sensibilities. In the Big Tail Elephant, the model was loose: a group coalesced as much out of exhibition or organizational necessity as out of a shared set of thematic concerns. It persisted in the collective mind of the Chinese art scene more because of the quality and unity of the work its members realized than because of any manifesto. “There was no leader,” he notes. “It was a platform, a way of working together, for the sake of revolution.”

In 2005, Chen Shaoxiong went to Tokyo for the opening of “Follow Me,” a Chinese-contemporary compendium of the style then in vogue, curated by the Mori Art Museum’s Mami Kataoka. At the opening he made the acquaintance of Tsuyoshi Ozawa, whose first question was whether Hou Hanru, a curator with whom both had worked closely, had invited the other to participate in that fall’s edition of the Guangzhou Triennial. Instead of participate in the normal way, the two decided to embark on a collective painting project, mailing a scroll back and forth to each other and painting in dialogue. The resulting Canton-Tokyo highlighted the disparities in the urban situations of these two locales, perhaps the most studied cities in Asia. The collaboration with Ozawa continued to deepen, culminating in 2006 with the exhibition “Summer Holiday,” in which the two artists brought their wives and daughters along for a month of living each day inside the gallery then still known as UniversalStudios-Beijing (later changed to Boers-Li Gallery). For thirty days they played games, documenting the results with used props in segmented squares spread across the exhibition space.

Independent of this, Chen also began, at around the same time, a project of exploring his city through ink. His Ink City installation premiered at the same edition of the Guangzhou Triennial (thematically focused, appropriately enough, on the Pearl River Delta as “a unique space of experimentation for modernization”) paired incidental ink sketches of the situation in Guangzhou with a sequenced projection of the same. In a piece that got to the heart of the questions raised by the biennial in which it premiered, Chen edited several hundred letter-sized images of urban scenes from around Guangzhou into a video sequence that danced across the sorts of moments the contemporary urban subject experiences inside the Chinese city.

In an art scene where the contemporary role of “traditional” ink painting has long been a key question, Chen Shaoxiong’s turn to the medium excited certain critics. To the contemporary side of things, at least, this assortment of sketches was a way of bypassing this difficult roadblock. Unlike the neo-literati ink works of Liu Dan or Li Huayi (see p. 136) Chen’s use of ink pays absolutely no homage to earlier precedent. He simply takes it as one among a nearly infinite set of possible materials, using it in the service of other concepts. This move toward ink comprises one of the key strands in his practice of recent years; from Ink City he moved to Ink Diary, conceptualized along similar lines. In 2007 he showed this work at Boers-Li under the title “Visible and Invisible, Known and Unkown,” with an elaborate setup wherein a camera mounted on a toy train traveled a track high in the gallery sky, feeding the looping image to monitors mounted below. Another series entitled “Collective Memory” consisted of ink paintings of urban memories made entirely with the artist’s fingerprints. Most recently, Ink History, premiered at Pékin Fine Arts last year, offered a condensed three-minute version of modern Chinese history from the fall of the Qing through the present, all in Chen’s now signature style.

The national concerns expressed in Ink History resonate nicely with the explorations of the Xijing Men. The three are, after all, of roughly the same generation, which is to say, the generation that experienced— each in their own respective country— the crucible of contemporary identity formation in the contemporary age. While Chen Shaoxiong came of age in the early reform era in southern China, Ozawa grew up in the excesses of the 1980s Japanese bubble economy, and Gimhongsok alongside the student movements in Korea. While the systems and histories of these three nations remain disparate, a common attention to the forms of the nation-state particularly the visual forms—characterizes each. The performance of these symbols is perhaps exacerbated, or thrown into relief, inasmuch as these are not, strictly speaking, native to Asia. With this in mind, the Xijing men chose a Pantone shade of blue composed from a perfect, digitally mediated blend of the blues that symbolize other collectives of nations— the U.N., the European Union, NATO. The national emblem recalls the points on a compass, directions unlabeled. The Xijing Olympics, staged in 2008, used a font not unlike the one that announced the Mexico City games of 1968.

Further Xijing exhibitions have explored various facets of this imaginary national identity. Sometimes this is done through performance, as with a puppet show created for an exhibition in Nagoya, later transformed for another exhibition in Liverpool. Later this year at the Bevilacqua La Masa foundation in Venice, in a show commissioned by Arthub Asia and curated by Beatrice Leanza, they will give visual form to their recent experiments, in a series of sculptures literally bound together by a massive Xijing-blue flag.

While the project may look at first to be highly ironic, perhaps it is best regarded in the same spirit as one of Chen Shaoxiong’s key earlier works, the 2002 video Anti-Terrorism Variety. In the video, Guangzhou’s then-largest building twists, bends, splits apart, and reassembles in order to avoid the hand-drawn airplanes that fly at it. The awkward English translation does much less work than the Chinese original; Huayang Fankong being the word that denotes competitive figure skating or rhythm gymnastics, as opposed to in relation to the more ordinary varieties of these activities. Fankong, an abbreviated word meaning “anti-terrorism”, was very much in the news then. The juxtaposition made it seem a sport like any other. The video bespeaks not an outright cynicism about international affairs so much as a pungent, distinctly outsider sense of humor. For Chen, the proposition that Chinese buildings had the power to fend off attackers through skillful calisthenics was a preposterous one. So, perhaps, is the idea of an imaginary country bringing together citizens of three distinct nations for a regimen of ordinary activities under a single flag.