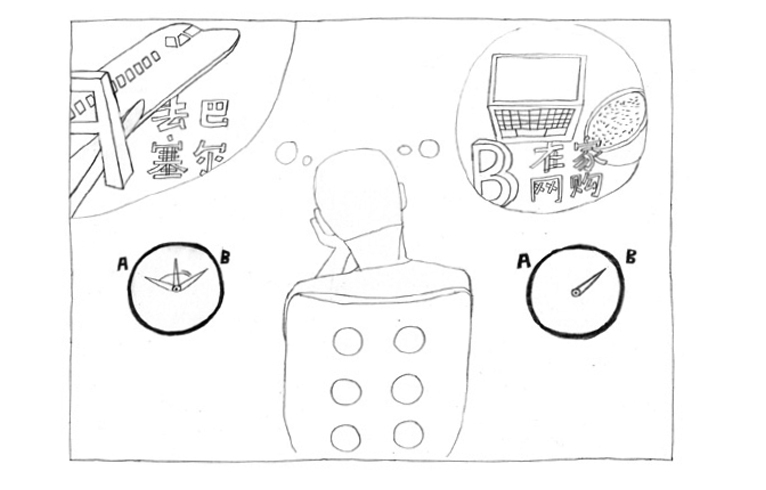 By the end of the twentieth century, nearly every commodity in this world had been made available for purchase online, and it wasn’t long before the opportunity to acquire art in cyberspace arose as well. Of course, nothing much came of early attempts to sell art over the Internet— the first online dealers quickly found themselves in debt and fizzled away— and the impetus to try again muttered and walked away. But in the last year or two, a slew of new web ventures with unlikely financial, technological, and even academic backing, have materialized, poised and ready to cash in on our now tried-and-true willingness to spend money online. Whether due to an increased understanding of how humans interact with the Internet or of how they interact with art, the fact of the matter is that the impetus is back, and buying and selling art online suddenly seems once again viable.

In some respects, the new wave of online art sales is a very 2011 phenomenon. Back in January, the art world turned its attention to the VIP Art Fair (vipartfair.com). As its name suggests, the VIP Art Fair is a rather elite affair— even if the initials actually stand for “viewing in private.” Founded by experienced art dealers James and Jane Cohan and online entrepreneur Jonas Almgren, and directed by Noah Horowitz (formerly of Serpentine Gallery and author of Art of the Deal: Contemporary Art in a Global Financial Market), the site has made tremendous efforts to follow the traditional art fair model. Though exhibitor fees amount to only twenty percent of the standard “real world” art fair, gallerists still paid as much as USD 20,000 to “show” during the event’s inaugural nine days. The desired effect was that for the most part, despite the absence of shipping or travel costs, only the most successful gallerists would be granted admittance, and that only the most earnest of buyers would “attend” the fair. To interact with participating galleries— via the site’s chat software— required that users be invited by dealers, or that they otherwise pay a hefty USD 100 for the first two days, or USD 20 for the remaining week. Having browsed the fair’s three exhibition “halls”— units with self-explanatory names of Premier, Focus, and Emerging— potential buyers were allowed to freely approach dealers for purchase before the fair’s end. Yet just as at Basel there isn’t a central cashier to process acquisitions, here collectors were asked to personally contact dealers by instant message, email or phone to cut their final deals. Although there were (crucial) glitches in this first installment of the fair— the dealer interactivity function proved to occupy too much bandwidth and was quickly cancelled— official reportage recounted that more than 41,000 collectors from 196 countries patronized or communicated with the 138 galleries from 30 countries. Of the works from over 2,200 artists on offer, it was reported that several individual pieces were sold in high-end price ranges of up to USD 1 million. Add to that the presence of top-tier galleries like David Zwirner, Gagosian, and The Pace Gallery, as well as works by blue-chip artists like Damien Hirst and Takashi Murakami, and VIP Art Fair can already be labeled as, at least nominally, more successful than many art fairs in the real world today. The second edition is set for January 2012.

Far from the quick-fix sensation of the art fair template, the invite-only Art.sy seems to be 2011’s most heralded startup, with plenty of buzz generated in both the business and art worlds. Perhaps with reason: the website’s pedigree alone is enough to induce pangs of envy in would-be online art dealers. Investors include Dasha Zhukova, founder of Moscow’s Garage Center for Contemporary Culture; film producer Wendi Murdoch; and Jack Dorsey, creator of Twitter. Advisors include Larry Gagosian; Haunch of Venison’s Barrett White; and Pandora CEO Joe Kennedy. That last affiliation is key, as Art.sy’s main claim to fame is the “Art Genome Project” which powers it— essentially a complex algorithm that pinpoints works of art based on subject, history, and color, among some 200 other characteristics. Yet in the site’s own parlance, all these names still take a back seat to that of the founder Carter Cleveland, described as “a Computer Science Engineer from Princeton University with a passion for fine art.” He and co-founder Sebastian Cwilich assembled a team and had a working iPhone app in time for Basel in June, even if some collectors felt turned off by a dinner launch at the Fondation Beyeler at which Cleveland, whose site had yet to fully open, was toasted as “our own Mark Zuckerberg.” The revenue model hinges on brokering sales between browsers and the galleries who show works there, with fees similar to those charged by more traditional (read: human) art consultants. Skeptics note that whether or not it is able to collect those notoriously difficult commissions, Art.sy stands poised to walk away with a massive database of collector traits and interests. 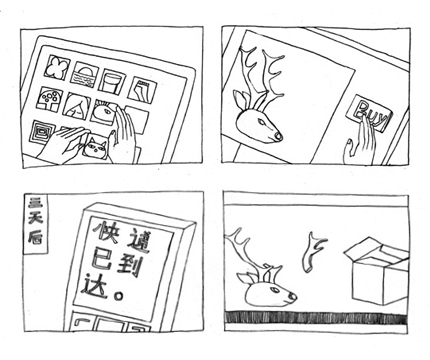 Then there are the niche players. Paddle8 (paddle8.com) as the most unlikely name of them all. A fresh visual identity and slick promotional materials— a whirlwind of thick card stock and letter-press printing— lend a distinctly offline credibility to the site. The name is a reference to the successive rounds of eight “art world influencers” who provide multifaceted insight into the works on display. The first round included heavy hitters like collector-pundit Adam Lindemann and mega-advisor Thea Westreich. They offer comments on “exhibitions” curated by other art-world impresarios— the first was by downtown veteran Glenn O’Brien, on the theme of “Wit.” Supplementary materials abound, catering to the sort of collector who sees art as a diversion as much about intellect as investment. The site is even generous, with these materials ultimately becoming available to the general browsing public (and not just its invited members) once each exhibition expires.

In a similar vein, Artspace Marketplace (artspace.com) started by collecting in one simple interface various examples of that great object of art-world longing, the museum-issued edition. Museums often produce editions with the artists they show as a way of monetizing their publics’ goodwill; sometimes, lacking a dedicated sales team, they end up letting these objects languish in storage. The site’s founders, Catherine Levene and Christopher Vroom, along with a team of advisors and editors, have provided a platform that discovers, catalogues, and makes these objects available for sale, often packed and shipped directly to the client by the issuing institution or gallery. The result is a chance to purchase affordable multiples by established artists— conveniently sorted into collections like “Beach House” and “Wedding Presents”— some of which carry the added benefit of supporting arts hubs like Lincoln Center and Boston’s Institute of Contemporary Art.

Not all these sites are so highbrow. PurePhoto (purephoto.com)— a recent darling of the business press— is formatted to be highly user-driven, perhaps a reflection of the highly accessible medium it aims to sell: photography. Visitors to the site’s homepage are prompted to browse as either buyer or seller of “affordable art prints.” The interface thereafter has taken its cue from popular social-networking sites like Facebook and Flickr, in that buyers and sellers may register for free, upload their images to their own personal pages, and “follow” other users. They can leave comments on available works, which they can “like” with a simple click of the mouse. Likewise, users can join, and images can be submitted to, themed “groups,” categorized along basic lines into portraits, black-and-white, and world photography, to name a few. The result is not unlike a trip to Beijing’s 798 gallery district, where one struggles to spot a few good things amidst the schlock. PurePhoto’s “Curated” or “Editor’s Pick” collections attempt, without much success, to inject some sense of expertise into the otherwise YouTube-like ooze. If the site is generating any praise from the art world, it is likely due in large part to its profit-driven business model, by which thousands of artworks are suddenly and easily available for sale— with a formidable fifty percent cut going to the site. 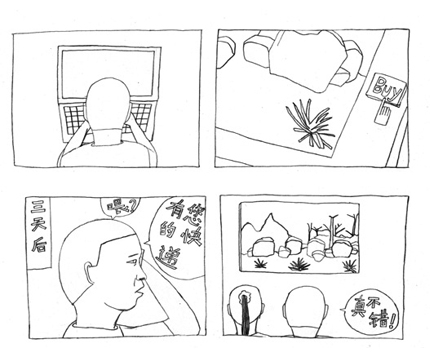 Some have heralded the rise of online art shopping to spell good news for Chinese art collectors, who perhaps until recently had yet to make a strong showing at international art fairs and expositions. Be that as it may, the lack of Chinese-language service on every single one of the aforementioned sites (along with ever-tightening customs regulations) may spell a hindrance to the hope that more shipments will be China- bound. Regardless, China now has its own outlets for online art shopping. Newstar (newstar-store.com) offers a range of artwork, from painting and sculpture to photography and installation, that is easily searchable by parameters of size, price, and precise medium. Unlike its foreign counterparts, here customers can also make use of the site’s telephone support service, should the site prove incapable of answering their inquiries. Newstar calls itself a preferred exhibition platform for young artists across the country, a claim that is backed by the caliber of the artists for sale, and by the price range potential buyers are looking at— available paintings, for example, number greatest in the less-than-RMB 15,000 range, and very rarely go for more than RMB 200,000.

Smaller enterprises have also come out of the woodwork, such as the China-based Paper Terrestrials (paper-t.com), a brand-new start-up that focuses on limited-edition silkscreen prints from young Chinese artists and illustrators. The model here is less about generating profit than it is about giving emerging collectors and artists alike the chance to collect and be collected, as evinced by their summer 2011 collection, which boasts only five artists. Both Artsicle (artsicle. com) and Uprise Art (upriseart.com) are New York-based web ventures that focus first on “renting” art: NYC-dwelling subscribers, for USD 50 per month, may have their choice of art installed in their home, for as long as it takes to decide whether or not it “suits” them, with the option to exchange artworks at any given time.

Naysayers will claim that in the West and in the East alike, art collection as an activity pertains to the elite, only for those who can afford to shop in person— and how many of us common folk, even, would dare purchase a painting we’ve only seen in pixels? Yet a few days browsing through these sites also leaves one with a desire to fill in some credit card details and own a piece or two. After all, speculating about the viability of these new possibilities is not that much different from speculating about how much value your latest art acquisition will accrue. Browse, click, acquire: whether friends, food, or art, that’s how we construct our worlds today, both virtual and real.