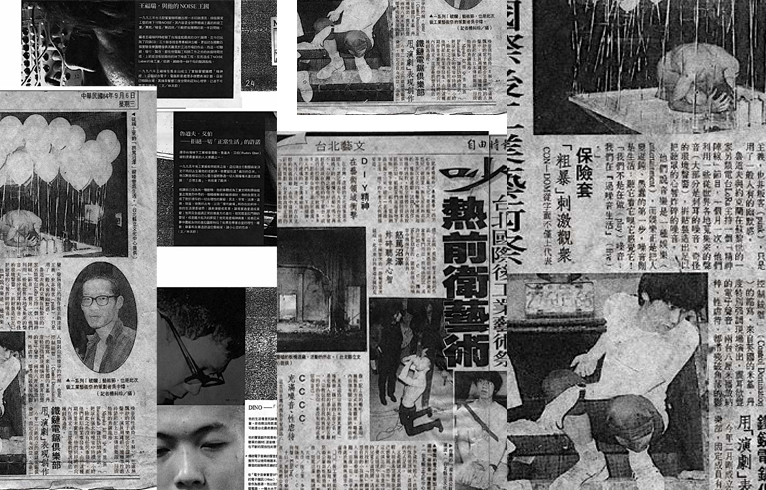 In Taiwan, noise is a surplus of culture. It began with a generation of well-to-do youth, and ended with that same generation.

The discussion of the history of noise in Taiwan likely dates back to sometime around 1994, to the experimentation, rebellion, political collision, media-ization, intimate gatherings, and festivals with which that period was saturated. This was after the student movement generation, when student activists started to ascend the political ladder. Basking in the light of media and culture, break-off “surplus activists” ushered in the current period of music festivals, alternative media, film festivals, outdoor raves, installation art, and alternative spaces. With these activities, the (post-)student movement wanted to transform itself into an autonomous and critical generation of youth. If it wasn’t overly naïve, then it was overly conniving. Where naïve, they sought to establish a new era, and independence from historically determined “genius”: a fairytale that inadvertently transforms into something momentous— an apt comparison would be how rock and roll once transformed the world. Where conniving, they sought a critical context to replace the existing mechanisms of power, overthrow the previous generation, and hold off any repercussions. The student movement was intricately connected to the fertile culture generated by university organizations and surrounding spaces, sprouting a multitude of exotic flowers. Just as universities need to be validated by the outside world, the elite presupposes popular culture, and vice versa.

The student movement generation were actually the new successors of the capitalist class— it is from these pockets that they drew money to buy their magazines and records. In fact, they were the first generation in Taiwanese history to be unencumbered by the anxieties of work and putting food on the table. A prosperous economy and a gradually open-minded politics safeguarded the vibrancy of culture, which came to encompass people in rock and roll, small theater productions, women film festivals, or people beginning to make creative commercials. On the crest of this wave of exceptional competition, there were people engaging in things of which even they would be hard-pressed to define— things that displayed an indifference to notions of aesthetics or political correctness. Noise had come to take up the revolutions in space and sound aesthetics necessitated by the political society of post-martial law Taiwan. Noise is essentially a surplus product of a fertile culture, and it is this very fact that ensures the fertility of culture itself.

In Noise: The Political Economy of Music, Jacques Attali writes that the process by which noise is accepted by society is essentially the process of promoting the “exclusion” of musical genres. One cannot refute this, but neither can one explain how “noise” continues to be an autonomous form of culture. Moreover, in this case, the differences between the music histories of Taiwan and the West are simply too great to ignore.

In The Rules of Art: Genesis and Structure of the Literary Field, Pierre Bourdieu reveals this field of cultural production more precisely, noting that artists and writers, in addition to common intellectuals, form one part of a ruling class who are themselves ruled by others. Only via the rejection of this existing duality can they regain their autonomy. In Taiwan, noise opposes commercial rock and roll and popular music, as well as ballads and protest songs that are created with societal issues or the enjoyment of the people in mind. Inside this “structure,” noise accedes a highly specialized area of production. Its “performativity” nurtures and stimulates the cultural (and market) needs of postmodernism and pluralism, furthermore ensuring the vitality of culture. However, this condition had already come to an end when around the year 2000 noise had become a sine qua non of “profanity” (an example of this being the now disbanded Loh Tsui Kweh Commune). Culture’s surplus had turned into a reproduction of capital— and no more consumption meant no more noise.

The aesthetic and political discourses with which the exegesis of noise was confronted in the 1990s have since been shelved. At present, they have been “misappropriated,” as indicators of political correctness. For example, iSun Affairs recently published a book in Taiwan titled Love Noise. The book featured bands and musicians from China, Hong Kong, and Taiwan, claiming that since they possessed social conscience and their lyrics, a critical mindset, they could be considered noise (unsurprisingly, the book was completely incapable of dealing with music without any lyrics). Such analytical methods, which discuss rock and roll and society under the guise of “authenticity,” essentially serve as the funeral for the malfunctioning aesthetics of real noise. On this political spectrum, everyone would love noise— the hipsters, the bohemians, the beatniks, the young and the angry… who wouldn’t?

The “authenticity” of rock and roll culture emphasizes freedom, individuality, and independence— the social ethics on which neoliberalism most depends. Ardent rock and roll fan and American cultural scholar Lawrence Grossberg painfully points out the reasons why the children who grew up listening to rock and roll would come to elect Reagan and Bush in the 1980s. Alas, we may finally understand where capitalism and the record industry have grown together: the sounds of protest are increasingly easy to produce, be heard, and turn into objects of worldwide idolatry. To a certain degree, noise has been able to elude this framework. But in Taiwan, it has been castrated by some cultural critics, and reassembled in shiny, “controversial” packaging to be put on music store shelves.

Taiwanese noise artist pioneer Lin Chi-Wei put it best when he said that if there is nothing new, then there is nothing old. What he didn’t predict was that those who undertook the task of yesterday would be the ones who would ruin it today. Ultimately, noise cultivates its own feeble gravedigger. Not only does it disinter an unbearably rancid corpse, but it also throws itself again and again at the market, epitomizing (seizing) the annals of Taiwan’s most glorious years.

(Referring to the generation born roughly around 1966, the “student movement” saw its peak following the lifting of martial law in 1987, and ended in March 1990. Politically speaking, the student movement ruptured a space in society to sow the seeds of culture that came to bloom in 1994.)