The 2012 Taipei Biennial, “Modern Monsters/Death and Life of Fiction,” is the latest large-scale international art exhibition making a re-examination of modernity. Its mouthful of a title— especially in Chinese— originates from Taiwanese-American scholar David Der-Wei Wang’s book, The Monster That is History. In it, Wang explores the profound relationship between historical violence and literary writings. Utilizing and referencing Western discourses about totalitarian violence and modernity, Wang finds a corresponding synthesis, an image, within Chinese mythology: the Taowu.

As the Biennial’s German-born curator Anselm Franke sees it, the monster Taowu— representing “human failure to master history” and the “blind spot of the respective historical rationales”— not only yields an interpretation of modern Chinese history, but the analogy can be expanded to thinking about literature, history, events beyond China, and to exploring a common experience of modernity. To this end, the image of Taowu and its visual symbolism provide a key entry point, while also serves as the nexus of “monster” and “fiction” in the Biennial’s title.

The exhibition takes the imagery of Taowu as its organizing metaphor, through which the curator proposes a meaning of fiction that is interwoven with imagination. First, in the course of modernity the monstrous manifests as systemic violence, including warfare, colonialism, and oppression. In this context, fiction and imagination equate to deception, misinformation, and irrationality. These violent acts are born from the fundamental contradiction of modernity— its unrealizable promise of an enlightened, progressive, abundant, grand, and yet fictional expectation.

At the Biennial the most straightforward expression of this underlying conflict is seen at one of the mini-museums, “The Museum of the Monster That Is History,” curated by Franke and James T. Hong. Its display of innumerable documents and historical objects highlight how political regimes use terror to enhance state control, all the while parading under the flag of rationality. Subjects chosen by the curators include biological warfare research by Japan during WWII, which used the guise of medicine and science to service its production of terror; and the Great Famine in China, which began with the state’s excessive demand for productivity and ultimately ended in disaster. Here the artist’s presence has strong moral leanings, the forms of artistic expression secondary to the more important task of using methods from visual research to untangle history.

Whereas the five-channel installation Triptych of the 20th Century (2002-08), created by Yervant Gianikian and Angela Ricci Lucchi, is a composition of three parts: “The Wounded Body,” “To the Defeated,” and “Terrorism.” Through image assemblage and juxtaposition, the videos reveal the bloody and cruel machinery of war. “The Wounded Body” shows a brain surgery shot in close-up. As the surgeon’s knife cuts open the skin on the patient’s head, splatters of blood fill the image and become lodged inside the viewer’s body and soul like bullets. Meanwhile “To the Defeated” makes the ultimate contrast between prosperous post-war American life and its stark opposite: Confronted with the visual dissonance between a young white woman leisurely cooking in her kitchen and persons ravaged by hunger and war, the viewer begins to doubt the existence of the self.

Unlike the norm of brightly lit exhibition halls, the lighting at the Taipei Biennial has been intentionally dimmed, creating an unnerving and ghostly atmosphere. The gloomy ambiance enhances the Biennial’s exploration of the dark side of history and modernity, while forming an aura of the supernatural that highlights a crucial association between fiction and imagination, namely that whatever is suspected of non-compatibility with rationality and the reality principle is also what modernity vigorously opposes, including faith, superstition, soul, reincarnation, and theories about animal spirits. The Biennial advocates using these concepts to re-examine modernity. Perhaps only through such phenomenon can we break the existing modes of thinking and find clues to contemporary crises— the ultimate importance of reinvigorating the imagination. This is ultimately the Biennial’s poetic, optimistic stance. 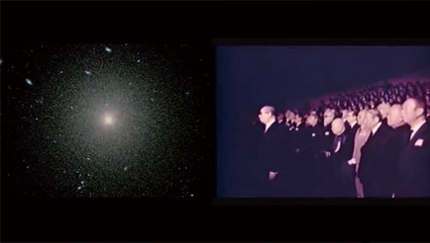 Such a possibility is hinted at in the documentary Assemblages (2011-12) by Angela Melitopoulos and Maurizio Lazzarato. Working with Felix Guattari— French psychotherapist, political activist, and philosopher— the two artists document Guattari’s research trip to Brazil and Japan. Guattari is enormously interested in animism, which he studies to find “alternatives to a Western ontology that separated nature from culture, signs from things, and the individual from the collective.” Not surprisingly, Franke has also researched the subject. “Animism” is the title of a long-term exhibition and publication project curated by Franke, versions of which were mounted at five different institutions from 2010 to 2012. Exhibiting contemporary works alongside archival materials, “Animism” challenged the commonplace notion that animism is a primitive, non-scientific system of belief and pointed out the limitations of such a point of view. By renewing the search for interconnections between dichotomies that modernity has severed— life and non-life, subjective and objective, imagined and realistic— this project sought possibilities that could serve as a substitute to modernity. And so it was the series of questions Franke asked in “Animism” that planted the seeds for this year’s Biennial.

When such animism-infused imaginations were confronted by the overall Asian context, art sparks flew. On the one hand, the themes presented, such as mythology and spirituality, are ideas that are entwined within Eastern cultures; because it raised the issue of these themes’ intricate relationship with an alternative modernity, the Biennial does not sink to using tired clichés of Orientalism. On the other hand, the curator’s selection of artists broke from the trends of celebrity in international exhibitions, instead favoring artworks that are agile, sensitive, and in stark contrast to the current models of highly procedural, conceptual, and pedantic art-making.

Especially worth mentioning here are works by the younger artists. In Receding Triangular Square (2012), Indonesian-born Swedish artist Virlani Hallberg collaborated with psychoanalyst and cultural theorist Leon Tan in her exploration of different ways to cross boundaries, as practiced in traditional healing methods of Taiwan’s aboriginal cultures, Daoist rituals, and Western psychiatric treatment. The boundary referred to here is more than the line between life and death; it is the boundary between the societies and cultures that have been destroyed. Taiwanese artist Yin-Ju Chen’s new video installation, One Universe, One Nation, One God (2012) was inspired by Hannah Arendt’s analysis of space exploration. Through the juxtaposition of images taken in outer space, historical photographs showing war and demonstrating oppression, animation simulating planetary movements, and an analysis of Chiang Kai-Shek’s astrological horoscope, Chen exposes history as both preordained and irrational.

Finally, the six mini-museums created by the Biennial intentionally leave the audience with questions that Franke does not answer in his curatorial statement. It is possible that this thing we call a “museum” is another monster of modernity. When a format has been repeatedly declared dead, how then to investigate its possibilities in new cultural creation, to let it come alive and become full of vitality— perhaps this is one of the Biennial’s unstated metaphors. Xiaoyu Weng (Translated by JiaJingLiu)