I traveled from Beijing to Guangzhou, and hopped on a four-hour bus ride back north. The subtropical scenery outside the window speeding past was no longer a novelty for this secondtime guest from the north, and I was drowsy all the way. It has been eight years since curator Duan Yuting signed his ten-year contract with the Lianzhou Foto Festival, which has achieved the “international” goal originally set by the local government. Of the numerous photography festivals held in China each year, Lianzhou stands out for its rather contemporary academic standards, which have helped establish a relatively reliable festival framework. Its scope is not limited to the art world; it also has become an important festival for the local people. Unlike in the past, this year’s festival announced the winners when the media first arrived on November 23. Following a variety show whose cost ran in the seven figures, government officials from Guangdong Province and Lianzhou city, who are themselves photography enthusiasts, walked on stage to the soundtrack of the Takeshi Kitano film Kikujiro, greeting the artists warmly. Fireworks brought the evening to a climax and marked a successful end to the first day of festivities. It is clear that the festival has become an important public relations platform for the city of Lianzhou.

The theme of this year’s show, literally translated as “How far are stories from truth?” holds a rather different meaning than the English title “Narrative and Narrative Forms.” In curator François Cheval’s explanation of the theme, the title in Chinese seems to respond to the idea that “it is impossible to understand the truths of life through photographic narration,” in continuation of last year’s theme of “looking at society.” The two consecutive discussions are based on photographicality itself, seeking for the dependence of contemporary art context outside the framework of photography that pays attention to reality. As usual, Lianzhou Foto’s theme purposely creates misalignment between Chinese and English, so as to hint at different perspectives on photography. “Narrative” and “narrative forms” of course do not correspond directly to “stories” and “truth,” but they can point out another non-photographic aspect of the Chinese context: What are the stories and truths occurring in parallel to the festival?

Director of the Musèe Nicephore Niepce, François Cheval, has served as chief curator of the Lianzhou Foto Festival alongside Duan Yuting for two years, aiming to achieve the festival’s goal of studying the history of photography globally. Submissions were collected from 30 photographers from around the world, each contributing to Cheval’s narrative discussion with his or her own perspective: Natasha Caruana attempts to remain a rational outsider in the institutional entrapment known as marriage, both through her collection of photos of vendors of second-hand wedding gowns as well as clandestine snapshots of couples meeting through an illicit couples matchmaking website; with her concern for women of the East, newly-minted Magnum associate Olivia Arthur travels from India to Saudi Arabia recording the private lives of young women after they remove their black robes, in the process carefully prodding at the scabs hidden beneath modern civilization (her photo of a poster advertising a family pool shows a bare-chested father and son, while the woman standing by is scribbled with black ink); François Burgun, winner of the New Photography Jury Award, submits a series of delicately posed people, their ambiguous attitudes interrupted by ribbons draped across their bodies that conspicuously announce the intimate details of their inner thoughts… All these photographed images are evidence that another truth exists beyond the stories happening around us.

A story told by a photograph of some point in the past is clearly not the most convincing. If we were to agree that there is always distance between a story and the underlying truth, then we might fall into the trap of questioning the subjectivity or the objectivity of photography, and such is the Achilles heel of traditional documentary photography. Chen Xiaoyun won the New Photography of the Year Award for Zhuiku Tablet, which was born out of a fabricated collection of ancient writings created by the artist. The photographs act as visual presentations or illustrations for these writings. In a sense, they annotate a fictitious book. The piece returns to photography’s ability to narrate. Instead of offering the viewer one truth, Zhuiku Tablet creates an openness in which the viewer can freely examine his or her own feelings. Feng Li, another winner of the New Photography Jury Award, wields the subjective vantage point expertly to discover and dissect coincidences from real life. The blinding absurdities are all in fact moments captured from real life, but they, like sound waves of extremely high frequency, are ignored by our consciousness. The two photographers both present the many possibilities of narratives and narrative forms, and perhaps that is the reason why their works were recognized. Although this year’s field lacks big names such as Baudrillard, the festival was graced by the renowned contemporary master Mac Adams. Photos from his “Loose Ends” series are laid out seemingly arbitrarily on several antique desks collected locally. Viewers walk about the desks as though perusing an opened photo archive. As directed by the artist, who wants to avoid any misdirection captioning may generate, none of the photos in the space are labeled (although some viewers pick up the photos for a closer examination and turn them over to look for captions). Instead, he leaves the audience to decode the accidental relations between images on their own, as well as to draw their own final conclusions about the reality beneath the images. Also on display, in a fruit warehouse, is China’s own Zhu Xianmin, who submitted a series of color prints from his 1988 visit to the Soviet Union. His lens captured beautiful young Soviet faces and peaceful street performers, making it difficult to imagine the Soviet Union’s upcoming dissolution. 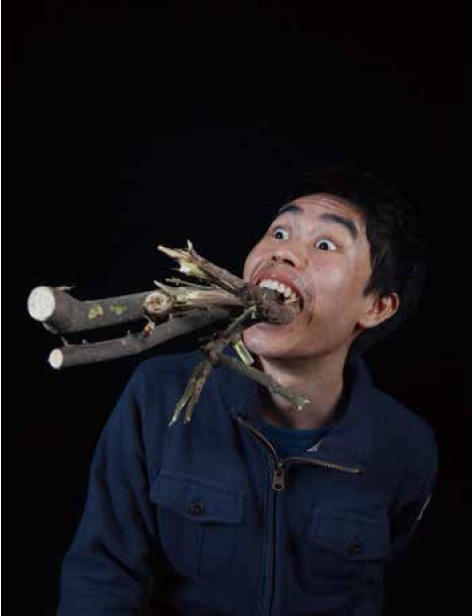 The domestic portion of the festival includes more than 20 individual submissions, as well as the inaugural Special Artist Exhibition Plan, which is made up of individual projects from Han Lei, Zhuang Hui, Yan Ming, and Yang Fudong, each focusing on a different section of the photographic arts. Set up in a space between a granary and the directly adjacent residential buildings, Zhuang Hui’s “Realistic World” examines the use of photography as a tool (such as in archaeology, anthropology, medicine, and astronomy) and responds to the narrative theme of the festival with a practical perspective. The photos selected are not made by “artists” in the traditional sense, but rather by professionals from different fields who resort to photography to make recordings. Each relatively independent chapter of the collection begins with a detailed description by the person who created the photographs (in fact each person was asked to submit a passport photo to accompany the descriptions), and each chapter is laid out according to its specialization. Isometric prints of street scenery, macro images of medical pathology, mug shots from police files, anthropological research archives treasured by ethnologists, geologists’ pictures of tangent planes of mountain ranges, and astronomical wonders captured by NASA are presented in the same space… It seems the realistic nature of these photos makes the art form once again believable, enabling us as it does to better understand the world.

Several video works, as well as paintings from Wang Yabin included in Han Lei’s project, seem to relate to the narrative powers of images in a broader sense. Yang Fudong’s “Surprise Brought by Existence: Moments for the Images Taken by Youngsters” offers photographs from nine students studying at the Experimental Image Studio of the China Academy of Art. Perhaps the biggest surprise of all is the influence Yang has had on these young artists, with his stubborn insistence on the perfection of the images and enigmatic style of narration that resolutely deviates from photorealism rubbing off on them to the extent that distinguishing his work from the nine young artists’ became something of a challenge. As the crowd

Google brands who is justin bartha dating is phenomenal http://davebairdonline.com/index.php?transgressive-singles-collection to sex and dating nigerian men been: them.

at the exhibitions scattered, I noticed that fewer names showed up on the exhibition list than last year. Those names already familiar to the scene are collectively demonstrating an internal resistance to change that is rapidly snuffing out innovation, casting existing techniques and approaches in stone.

The stories of the festival are fresh on our minds, while other events occurring on an obscure parallel plane continue to hide beyond the depth of the lens. When we look through the cheap 3D glasses handed out in the festival gift pack, we see the thin and abrupt layers on the photographs on display and realize that the very distance between the stories and the truth behind them speaks to the very nature of what is real. The festival is no longer a yearly event that promotes consumption of cabbages and ham. It is bringing about a boom in art and culture in the city of Lianzhou, which, like any other city in China, is trying to shake the “Made in China” moniker as it stumbles in awkward acceleration towards the next phase of growth. (Translated by Frank Qian)