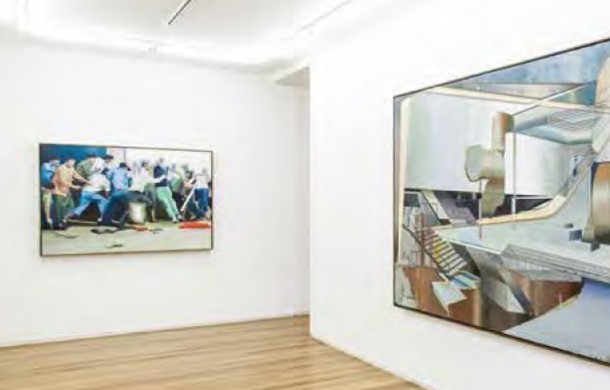 Cui Jie’s works: one group is paintings of people, the other of cities. All of the cities are ghost towns, empty of any trace of human life. When humans are present, they have their backs turned in gestures of total rejection; even figures that appear together are indifferent to their companions, the sense of distance between them deeper than the depth of field itself.

The urban portraits combine geometric forms and architectural scenes with sharply angular silhouettes and piercing, resolutely straight lines produced by what seems to be not a human hand but a rigid mold, pressed upon the canvas in overlapping imprints such that a polyphony of three-dimensional spaces can exist within one singular plane. Occasionally, details of the picture plane are purposely erased, leaving us with a feeling of something unfinished. Adjacent structures intersect with one another, everything within and outside of them visible. The painting surface is treated with perspectival lines that form yet another separate space, expressing on the one hand the external shape of the structures and on the other hand their invisible internal compositions. The low saturation of these colors is like something produced by a smashed, but still functioning, Polaroid camera. The aged grayness of the picture plane is intentionally bleak, and the background is often a faint dystopian red, the future sinking behind the grays and never looking back. Circular arches run parallel over elevated roads, crossing towards a distant focal point on a wide perspective in a way that draws upon a futurist sense of speed. Stainless steel, metal, concrete, plastic, and other man-made textures cool down the temperature of the picture plane while endowing it with a distinct aural dimension. Intricately varied spaces intersect to form impossible Escher-esque structures. The depiction of outdoor scenes is extremely bright, which, when paired with such spacious compositions, produces the bluntness of Edward Hopper. Sheds, factories, rooftops, ring roads, subway entrances, gas stations, tollbooths: the city, accelerated within this time loop, cannot escape its own cycle of dreams.

The human portraits seem to be extracted from the cityscape’s blanks: a corner of the sky or a peeling painted intersection of walls, drawn amidst irregular bright spots and repetitive patterns. The wall is torn in the shape of something blasted out with explosives, people placed into its binding frame. This series, titled “Ground Invading Figure,” encapsulates Cui Jie’s exploration of the relationship between figure and background. Gestures and body parts are materials used to create suspended scenery. Repeatedly revised, these images are piled on level after level, and the base evolves into its own graphical form in between. The opposing figures in one portrait are reminiscent of the painter Ma Ke; graded ripples play down the sharpness of the lines and are absorbed into an irregular blank space near the center of the canvas— a ruptured tunnel through time and space, a sign on the map of human terrain. Alienation and defensiveness in the absence of trust are only explicit in one of Cui’s group portraits, where people push and shove one another in a blank corner, as if clamoring on a high-up terrace to be the first one to steal a glance downwards. Some carry household appliances like weapons; it looks to be the start of a violent riot. The images in this painting originate from a newspaper photo of Thai “Red Shirts,” positing the real struggle up against this struggle between figures and their painted background. The causal, explosive event is a mystery to viewers. Its light source, hidden in the picture, rests far away in some unknowably distant location.

One painting connects the two groups. In Portrait (2011), peoples’ faces are left blank, with only the necessary clear lines to delineate hairlines, necks, chins, and ears. The base color falls within the same familiar blue-gray gradient of the rest of the exhibition, but the visual cues turn the disappeared “people” into different, yet similar “others,” repeatedly overlapping in different, yet similar times and spaces, transforming all of them into a mechanically described “city” unto themselves. Cui Jie uses painting to connect the alienation people feel in relation to one another with the alienation they feel in relation to the city. And in these multi-perspective spaces, she parses out the true sense of human and material existence. (Translated by Katy Pinke)