ONE COULD SAY that Li Songsong’s The One is a major work, one that seeks purity by way of refining the understanding of the language of oil painting, or by way of the conceptual. The work itself, roughly speaking, is a cylindrical silver tunnel, the inner walls of which are covered with 91 monochromatic paintings of various shapes and sizes. From one end of the tunnel, the paintings seem to stretch out before you, orderly in their chaos. Imagery has entirely dissolved away, leaving bare the soul of the artist’s treatment of painterly language: a steadfast affinity for geometric form that preserves the unique qualities of the paint, the textures left behind by the brush. Yet when confronted with the question of how to best express the essence of painting, the artist excuses himself, allowing the audience to set its own terms for appreciating the installation. Visitors are only allowed to pass through one at a time, and are not permitted to wander back and forth. As they walk alone through the round tunnel, their eyes are first drawn to the oppressive angles at the edges of the painting— hardly the typical, unhurried, face-on evaluation of a mounted work. Wielding his own principles, Li Songsong toys with customary spectatorship such that the audience cannot but note the thickness and grain of the paint. Traces of brushstrokes cover the surface of each painting, allowing visitors no respite. Perhaps 91 monochromatic paintings amount to a bewildering visual overload, but this bodily experience is precisely Li’s intention.

Some people might say that the political nature of Li Songsong’s earlier paintings is an obvious indicator of political attitude, but this would be biased. Many of his works, in fact, simply reveal the absurdity of public imagery. A number of Li’s paintings are derived from government propaganda, but anyone who has observed a changing political climate or a value system in flux will detect a whiff of the ambiguous in them. His work it, for instance, emphasizes the discrepancy between the appearance of Cambodian soldiers and their actual behavior— as portrayed by photographers, it is difficult to connect the two. In this case, whereby the “truth” the image offers us and the reality behind it sit worlds apart, history has been sculpted anew by the image.

In the mass media, images often draw a more emotional response than text— a potential that is certainly exercised by the powers that be. Images have hypnotic effects when used in political propaganda campaigns, as they influence people’s critical understandings of events and act as a tool for producing predetermined reactions. Li Songsong’s works have incorporated images that are seemingly non-political— pictures pandas, kung fu film stills, emergency evacuation manuals. Yet as with propaganda, the strength of these symbolic images lies in the ability to consistently incite responses without presenting any sort of intellectual stimulation. 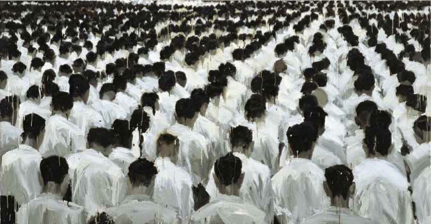 As if wielding a surgical scalpel, Li Songsong calmly attempts a meditative deconstruction of this phenomenon. As of 2003, he came to gradually abandon full-frame paintings, recreating ubiquitous mass-media images in multi-color grids of blocked pigment. In this creative process hitherto, Li has been confronted not with the overarching question of how to express his message, but rather, how to focus on abstract details (as evinced by the series shown in his 2009 solo exhibition at Pace Beijing, “Abstract”). The propaganda and indoctrination of the original images seem to be wrapped up by the thick swaths of paint, no longer to affect the viewer. In theory, an artist with years of artistic training will be immune to the hypnotic capabilities of images. In the eyes of an average office worker reading the newspaper over breakfast before going to work, images in the media will offer definitive information, but to a painter, these illustrations are nothing more than a bit of skilled planning, a crafted façade. In other words, in a world saturated with reproduced images, the painter has come to value his painterly language more than he does the the painting’s very images.

As an artist with a long career in oil painting, Li Songsong gleans a contemporary spirit from within the veins of classical painting, adopting the transformation of images as his personal realm of exploration. In his works from the 1990s, like Square and Police, Li places emphasis on the completeness of the picture plane, on the traces dark pigment leaves on light background. From 2003 on, he shifted his focus to balancing color, deconstructing the composition of images through generously applied layers of pigment. Fall of 2012 marks another shift, as his new work indicates a final renunciation of the figurative. Here, we see continued rumination on the issues of painterly language and Li’s clearly formulated response.

Li Songsong’s practice has never ceased to explore the possibilities afforded by the language of painting, particularly with respect to brushwork and use of material. He applies pigment so heavily it approaches relief sculpture, the intermittent strokes reminiscent of feet slogging through mud. Blurred faces appear to explain that the artist hopes only to preserve an approximate rendering of the original image, without seeking any further degree of accuracy. (Translated by Laura Tucker)