TEN YEARS AGO, when Frieze magazine’s Matthew Slotover and Amanda Sharp first floated the idea for a fair, London was still dominated by the same scene that had earmarked “young” as an attribute for those aging all-too-quickly, while casually dismissing East End upstarts as good time galleries, too messy to be taken seriously. The inaugural 2003 fair challenged this perception, spiking a selection of uncontested international heavyweights— Gagosian, White Cube, Hauser & Wirth, David Zwirner, Kurimanzutto— with edgier locals Maureen Paley, Modern Art, Vilma Gold, and Wilkinson. The mandate on primary market pieces ensured a continual stream of new work, while the curated program tapped into a less commercialized energy, through a series of commissions from known troublemakers Gelitin, Jeremy Deller, and Paola Pivi. By its sophomore edition, the Frieze Art Fair had an enviable roster lobbying for entry, with 150 galleries selected from over 1,000 applications. As the years passed and this competition only intensified, the fair developed two distinct subsections— Frieze Focus (a presentation of up to three artists, by a gallery opened after 2001) and Frieze Frame (a single artist from a gallery less than 6 years old)— as entry points for younger galleries. These up-and-comers injected a little unpredictability into an increasingly conventional showing, while also prodding more established dealers to keep in fighting form.

“Fighting form” may be an understatement. A decade in, the Frieze Art Fair is now jockeying to oust Art Basel from its perch atop the international art fair hierarchy. This year, as Art Basel expanded into Hong Kong, the London fair responded with a two-pronged attack of its own, launching new off-shoots Frieze New York and Frieze Masters. Frieze New York was a cleanly executed bit of imperialism, pitching a tent (literally) on turf formerly held by the struggling Armory Show. Frieze Masters is a more complicated maneuver. Timed to coincide with what is now called “Frieze London,” this new fair is just around the corner in Regents Park. Its definition as a “historical” fair— anything between 2000 BC and 2000 AD— discreetly introduces the secondary market into the Frieze franchise, thus pushing prices into a range heretofore unknown at the fair (for example, Helly Nahmad complemented his pairing of a Joan Miro painting with an Alexander Calder mobile with matching USD 20 million price tags). The wide breadth of work— from Native American arrowheads (Donald Ellis Gallery) to a Florentine saint (Richard Feigen) to Warhol drawings (Daniel Blau) to “Mesopotamian duck weights” (Rupert Wace Ancient Art)— drew comparisons to Maastricht, but Frieze Masters seemed to cater more explicitly to the tastes of new money collectors in town for London’s Auction Week. (After all, rumor has it that “Russians will buy anything…”)

In short, where there was once a breath of fresh air, something has begun to smell a little rotten in Regents Park.

Of course, that whiff of decadence may just have been Forcing a Miracle (2012), Joanna Rajkowska’s ritualistic incense burning along the grassy entrance to Frieze London. The Polish artist explained the act as a way to bless something without changing it. 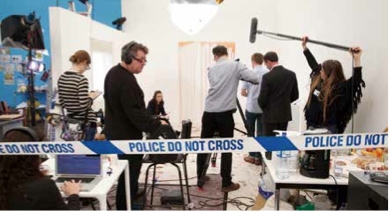 Then again, what better time for some aura cleansing? Indeed, while courting newly-minted collectors from the Middle East, Russia, and Asia, Frieze has traded in some of the plucky, cerebral street cred that it rode in on. The “young” roster of Frieze Focus risks replicating Art Basel’s similar subsections, with galleries like Karma International, Raebervon-Stenglin, Raster and Altman Siegel all recent and recurring figures in the latter fair’s Statements and Nova divisions. Even galleries selected for Frieze Frame seemed to underplay the permissiveness allowed by the branding as“emerging,” in favor of proving themselves prime for the “real” fair. At Crèvecouer, Xavier Antin’s concept-driven collaborations took the form of easily coveted design objects, while across the aisles at The Box, Sarah Conaway complemented her photographs with collectible bronze casts of her bric-à-brac subject matter. Still, there were some lighter moments; at François Ghebaly Gallery, impossibly endowed ingénues played nice with dinosaurs in drawings by Mike Kuchar, while 47 Canal made its own gesture towards youthful vigor (or at least Axe Body Wash) with a set of Josh Kline’s commodity-inflected assemblages. The most adventurous (or at least, most flirtatious) showing had to be at Carlos/ Ishikawa where Ed Fornieles’ CharacterDate was the latest in the artist’s experiments with human avatars (for instance, for this summer’s Dreamy Awards (2012), Fornieles assigned award ceremony guests new identities— be it as a celebrity DJ, newly irrelevant royalty or a down-on-their-luck art dealer— and then had them come together to celebrate all things “dreamy” with a Lana Del Rey lookalike and a very real Zac Efron). For CharacterDate, perky assistants were on hand to interview the brave fair visitors who consented to take new personalities out on loosely-scripted dates with other characters.

In its willingness to transcend the commercial structure of the fair, CharacterDate could have been mistaken for a Frieze Project (among other enterprises). The last hurrah of outgoing curator Sarah McCrory, this year’s crop of Project commissions included Rajkowska’s Miracle; a food-driven collaboration between Grizedale Arts and the Yangjiang Group; and Fair Trade, an online feature from DIS Magazine, that staged provocative visual interventions within the space of the fair. While the images produced made clever appropriations of the installed work, most of this art— see Geoffrey Farmer’s floating sword at Casey Kaplan or Carsten Höller’s trippy pink walrus slumped outside Gagosian— already functioned as a prop, in one sense or the other. Another of the Projects, Aslı Çavuşoğlu’s Murder in Three Acts, encountered a comparable obstacle, as it sought to fold the fair into a scripted crime scene drama. The Turkish artist applied a kind of loose forensics to the process of establishing the “value” of art, juxtaposing the language of science-as-entertainment alongside artist’s statements or gallery press releases. While this may be ripe territory for satire, it is also heavily-mined; in other words, while once novelty, irony is fast becoming a standardized feature.

Perhaps for this reason, the project which looked the most current was the one conceived in 1967. For his commission, “Grey Pop” icon Thomas Bayrle overlapped one of his older designs— a pair of “sloping loafers”— into a densely-patterned carpet the color of traffic lights. The visual shock was immediate, transforming the fair’s entrance into a kind of vortex, where commodity, leisure, and luxury were compressed into a single, repeated image.

If anything truly felt “new” in Regents Park, it was the old. Curated by Adriano Pedrosa (last seen teaming up with Jens Hoffmann for the 12th Istanbul Biennale in 2011), the Spotlight section in Frieze Masters gave galleries a chance to showcase a single artist. For the sake of practicality (i.e., available inventory), the tendency was towards this past century’s unsung heroes. Bucharest’s Ivan Gallery followed up on Geta Brǎtescu’s quiet triumph in this year’s Paris Triennale with a series of stunning tapestries, while Andrew Kreps Gallery continued their crusade for Robert Overby. It was not just about recognizing, resurrecting, or canonizing; Spotlight wagered that these artists belonged in a fair just as much as in an institution. Sperone Westwater’s presentation of Bruce Nauman led the way, proving collectors were willing to pay more than just lip service to the artist with splashy sales (rumored to be between USD 2-3 million) for Nauman’s 1971 installation Parallax Shell. Leo Koenig turned heads with a peculiar and gripping suite of photographs of Sigmar Polke’s. The aisle was Frieze at its most unpredictable and most rewarding; in dropping requisites for the “new,” Spotlight achieved real relevance and resonance, a feat quite novel for any fair.