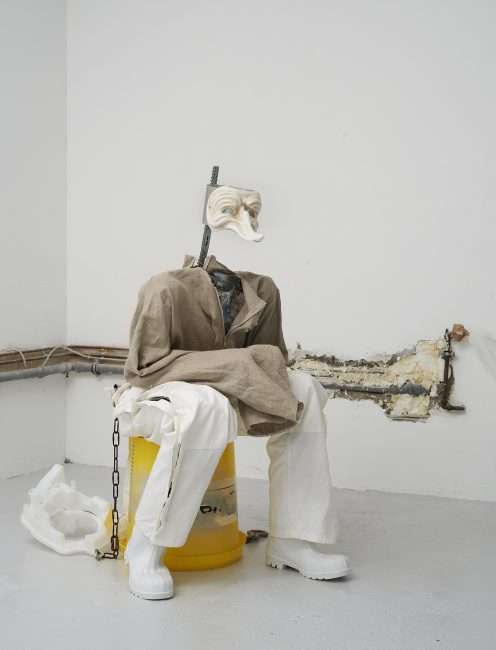 “Wetland” exists in the ambiguity between wet and dry states. Within the designated five-hour duration of the exhibition, its temporary state mirrors a constantly changing wetland; it can disappear at any time but contains the possibility to exist in other forms. A swamp or wetland lies between a passing stage and an interval; at the same time, it gestures to a society that lacks territorial borders. The entire exhibition is like a human body as a liminal being in an ambiguous and uncertain state. Entering the space, Albin Loostrom’s Hybrid Moments, positioned by the window and mounted on the wall, immediately catches one’s gaze. This painting, in a liminal state, gradually changes its own figure. It depicts a bird as it descends in motion. Directly ahead, the installation Canto evokes a sense of stasis, donning a mask like a human face to construct a contrast. This altered world may seem unrelated to him, such that he remains aloof and disengaged from all the chaotic events that unfold in the outside world. Loostrom’s other paintings, “3” and Humid Games, appear as if they are absorbing energy. The external energy is continually gathered within the painted image. 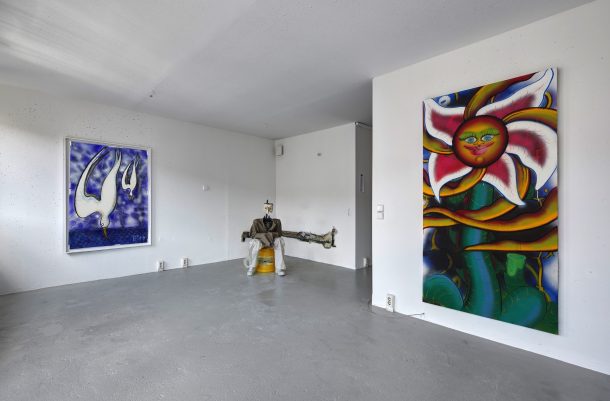 We now live in a world far from the dualistic values of subjectivity and objectivity. We try to forget humanity’s own subjective consciousness, in order to position ourselves as an object and try to mimic the appearance of humanity from that perspective. As the artist has the ability to create forms, he or she also has the ability to attempt the imitation of other types of materials. Though in the relationships between objects and their plasticity, human intelligence cannot be fully understood. Objects can understand one another through the subjective knowledge of the non-human. An artwork is created by the artist’s hand. However, it is both created and self-formed; in the world of hybridity, the boundaries between the subject and object disappear, and binaries are something that humans have constructed. In a liminal state, there is no individual, and the threshold is being transgressed. Might we view Steffen Bunte’s Canto with a human figure as the incarnation of the artist? Or is this material object with human features the artist’s dialogue with himself? This liminal being symbolizes a person in transition. He is in a society that does not have territorial borders. He mourns because it lacks control, but is relieved because they now have the “hostile forces of nature.” If someone could become liminal, the experience of occupying a transitional place where we move from one place to another could be revealed. 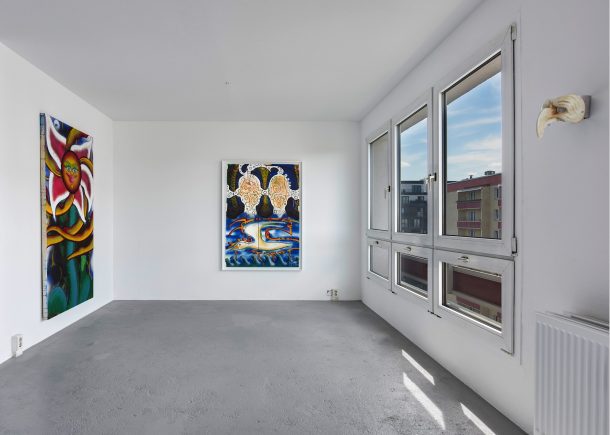 The reality concealed beneath the persona of Canto will not usually be easily perceptible to outsiders, because the masked layer protects the vulnerability of self. With the face of a person, the figure sits in waiting for a future that will not arrive. In this uncertain state, the body seems like it could collapse at any moment, but will never be fixed in a single instance. “Wetland” is immutable in the face of change, and represents a peaceful place in the context of a turbulent world—a static pause, an open threshold. 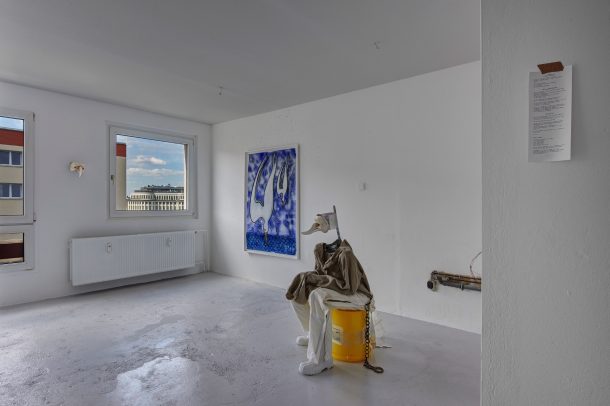