In “Misery Whip,” Sydney Shen’s solo exhibition at Gallery Vacancy, eroticism and labor, desire and humour, ornamentation and body all become rhetorical counterpoints that underscore a theater of objects. Loosely organized around cross-references to “farmhouse chic” or “American decorativeness,” the exhibition looks like a plethora of things ranging from feminine garments, archaic implementation devices of punishment, and farmhouse tools. Much like scenography design, what can be gleaned from those things are imaginations about farmhouse, funeral, needlework studio, or even a sex farce. The carefully organized “pool” of materials simultaneously evoke polarizing and ambivalent feelings—somehow someone finds oneself elegantly humiliated, lovingly grotesque, and miserably funny. The exhibition’s title evokes the phonological association between “whip” and “whipping cream.” The sweetness of cream and the bitterness in the Chinese word for “misery” make an intriguing semantic contrast, as if both good and bad appetites are welcome. Desire and violence are both present. Almost like a multipart music piece, Shen’s work creates the labyrinth of improvised motifs and the theater of great madness for invaders as much as absentees.

In Cicatrix, Haruspex, and Gunne Sax (all 2021), Sydney Shen borrows the form of a “shame fiddle,” a violin-shaped medieval implement of punishment for those—mostly women—convicted of petty crimes. The restraint devices are “propped” like minilabyrinths with embedded dinosaur gastroliths and round metal objects, looking almost like planets orbiting in the universe. She often improvises in a way not dissimilar to musical improvisation: you see an object or decorative motif reinvented through changes in forms and materials, much like musical motifs chiming in and fading out. In her earlier piece Please Don’t Eat Me (2016), scorpion specimens and a cello-shaped mopping brush find each other in “f”- and “s”-shaped patterns as if both are tuned in perfect strings. In Opera is a Bad Influence (2017), embroidered straitjackets are scattered over heaps of straw like the remains of a dissembled scarecrow, conveying something between hysterical sex and farmhouse labor. The installations encumber the space with a cast of sculptures, like a muted theater. Starting with some repetitive decorative motifs and a dancelike shuffling of materials emanating from her earlier work, these installations introduce an oneiric conjuncture of uncanniness and cuteness, like messages embedded in female-targeting consumer goods. 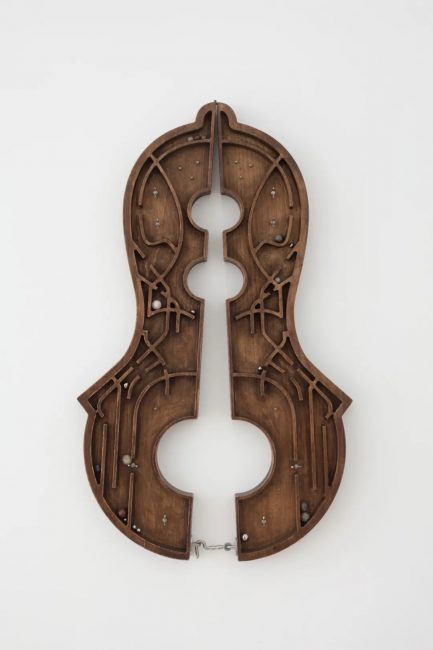 Courtesy the artist and Gallery Vacancy

In Shen’s Avicularia Avicularia (2016), a toy piano is hung upside down, its four legs tied by a rope from the ceiling. The work recalls so many things: Orlando Furioso, kinbaku, and of course the titular tarantula. The title also alludes to the misogynistic fable of a girl bitten by a poisonous spider who dances a tarantella until her death from exhaustion. In Here Comes the Last of the Great Romantics (2016), Shen mixes pig’s blood with her own and applies it over sheet music placed in the music rack of a piano, this one upright and full-size, with blooms of the fungus tremella fuciformis lining its interior like white rose bouquets. According to the philosopher Byung-Chul Han, artworks that align with the senses of smell and touch instead of sight and hearing undermine that which otherwise appears to be attractive and beautiful. The moist textures of blood and fungus, the skull, the spider… all thrust upon you a mixture of feelings that contrast with the pleasure of a smooth surface. The subjectivity of things begins where the pure pleasure of looking (and hearing) ends. 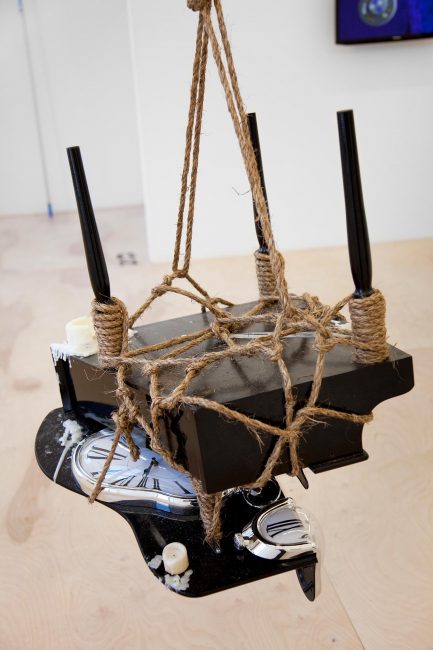 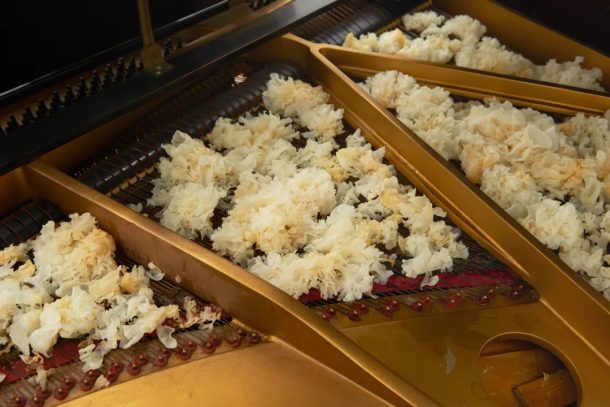 Sydeny Shen, Here Comes The Last of the Great Romantics, 2016

“Perhaps for me piano practice implies a sense of physical discipline which is quite different from [my] sculptures,” Shen has said. Perhaps Roland Barthes’s myriad writings on the place of the Other, such as his travel journal vignettes in The Empire of Signs (1970), suggest a way of being mesmerized by Shen’s installations. You start with subtle senses of touch, of smell, of hearing, to contemplate on alien things that dawn on you (and now make your carnality) until you become part of the arena. The cast of this carnival theater consists of everything but the real body—the stones, the bugs, the scarecrows, the musical references, the devices for punishment, and death masks. 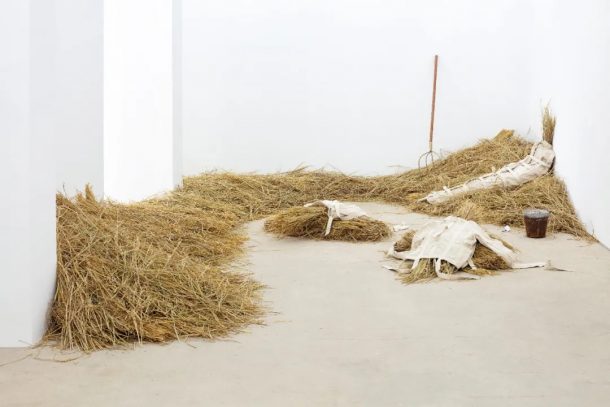 Courtesy the Artist and Gallery Vacancy

In Opera is a Bad Influence, embroidered bugs invoke the fairytale moments when women access magically transformative power via acts of weaving or sewing. “I like the friction between these lowly creatures and things that seem noble and sublime… The insects also have the capacity to bring great pestilence.” The loosely connected nonliving things produce a sophisticated network of nonliving “agents” in which objects are endowed with vitality and volatility, and both living and nonliving things are given equal weight. Amidst this alchemy of materials and surfaces, the occult subject of desire—the female body bound up by fear and fetish—is absent but felt; so too the eyes gazing upon her.

In Moi Même Moitié Le Momo, Folly Madness Phrensy Fever, and All the World Makes Great Blood (all 2021), a piece of iron with letters in cutout design cast from a traditional crosscut saw drapes like a real lace. Other hanging objects include a set of four “fly-swatter” pads with decorative fence patterns, but made of 3D printed nylon and velvet ribbons. The pads could be employed as an execution prop for self-punishment. In Myre Name is Lubbert Das (2021), a “death mask” that occupies the negative space of the basket is a cast of the artist’s own face—circumscribed by soft lace like that of a doll. Many of Shen’s works are presented as and through ornamentation. Emanating from the creatively chaotic empire of things, ornamentation functions as technology that disrupts linear time and conceals truth. Similar to “Hauntology/Ontology,” “Ornamentalism” and “Orientalism” are almost coined in a punning riddle. Historian and theorist Anne Anlin Cheng asserts that ornamentalism forges the sense of personness through artificial and prosthetic extensions in her critique of Western Orientalist shaping of Chinese women. Contextualized as a kind of technology, ornaments (inorganic things) become a precondition for the embodiment of personhood of a woman, and “style” is no more ontologically opposite to “personhood.” Like the muted piano, defunctionalized ornamental things manifest as ghostly personified beings. 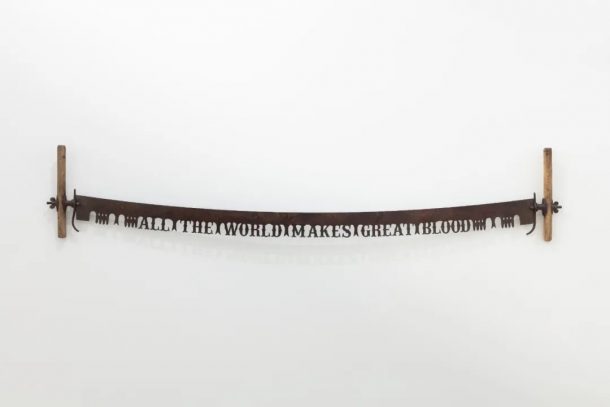 Courtesy the Artist and Gallery Vacancy

Velvet flocking, ribbons, stumbling garment—all cheat by mixing contemporary middle-class imaginations of the Victorian or medieval sexual fantasy. Although deliberate confusion of time implies something too nostalgic for digestion, it calls out a suppressed desire for the ghostly echo of the “past” ringing in “now” and “future.” It also renders various derivative points about being sarcastic with the objects to prefer nature to culture, ornament to function, instinct for death to drive for life, and sex drive to intellectual drive—being pared down to a new cycle of extraction, fermentation, condensation, and transpiration. 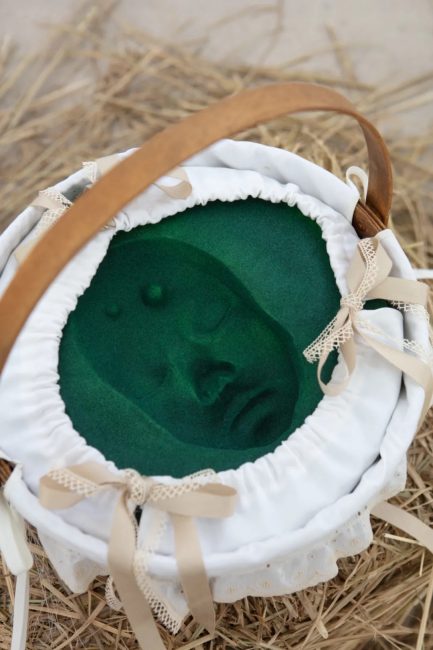 Courtesy the artist and Gallery Vacancy

This collision between disparate materials at first seems like a failed alchemy or even a Gothic Frankenstein sci-fi comedy brought to a halt by an “unperformed” action by the absent women or sexual inverts—decisive actions such as going mad, seducing/being seduced; and humiliating/being humiliated. Looking as if the stage were left only with props and specters and no actors, giving off only muffled sounds for occasional eavesdropping.