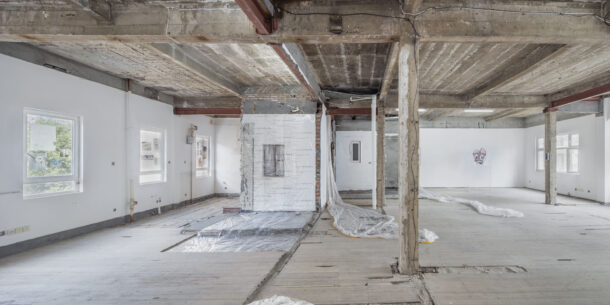 View of aaajiao: I was dead on the Internet, Lianhua Apartment, Shanghai, 2021
All pictures courtesy Sifang Art Museum and the artist

The weather in Shanghai alternates between heat and humidity. Our skin opens its pores, trying to absorb the scent of nature from the air. When I enter the exhibition space for “I was dead on the Internet,” dust, plastic sheeting and digital images bring about a feeling of suffocation, and all the pores that had been trying to open seemed to close up instantly. The space is not the usual white-cube gallery: unstable wooden boards underfoot, unpainted cement walls and the smell of old house in the air. I felt the extreme heat in the interaction between my skin and the plastic wrap. Although apparently an enclosed space, it brings no sense of security at all. The windows are half covered and half lit, and the railings remind me of a cage. If one can imagine this exhibition as the remains of a civilisation found in ruins by explorers, what is revealed by the codes on these sheets, by the everyday images on the windows, by the blank images in the video, would not be the truth of the past or the future, but hesitation about the truth in a parallel unknown space, and some secrets and courage—none of which worth mentioning in science and history. 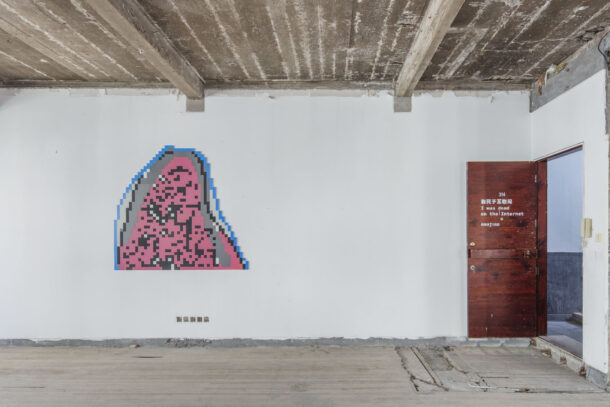 The secret comes first, from the plastic film that pounces on you as you glance at the exhibition. You wouldn’t realise that the folds in the floor are footprints until you approach and step on the work. A closer reading of the film reveals a dense collection of characters, “ddrk.me”—the code of the website “Di Duan Ying Shi” (Low End Films). However, the “ddrk” in the domain name is clearly not a pinyin acronym for “Di Duan Ying Shi,” but an indirect reference to “Di Duan Ren Kou” (low-end population). The webmaster writes on his website, “The domain name of ddrk.me is the webmaster’s self-deprecating. No offense to you who visit this site, please do not take it on.” Pinyin acronyms are “low-end” symbols invented for the sake of speech, playing a vague role in the internet context, and these barely recognisable new symbols are still forbidden, and can only show a single stroke across the thin film. The lighthearted joke of “ddrk” tries to reflect people’s faces in a translucent film, but we can all choose not to see it. 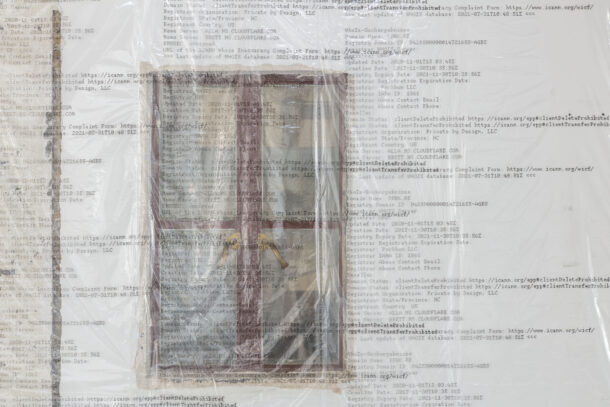 The landscapes and portraits painted with pixel dots in the grey space are the works that we find visually similar to aaajiao’s usual pieces. The “user,” a common concept in aaajiao’s work, remains in this ruined space with a mere trace of colour, saturation, and opacity, visible but difficult to identify. Virtual landscapes and portraits struggle with the confusion in flat pixels, let alone concrete people, concrete you and me. I was dead on the internet, between the virtual and the real. Neither I as an ID user nor I in the flesh have ever had a choice, and the freedom I sought seemed to fail to find an absolute answer between this duality. 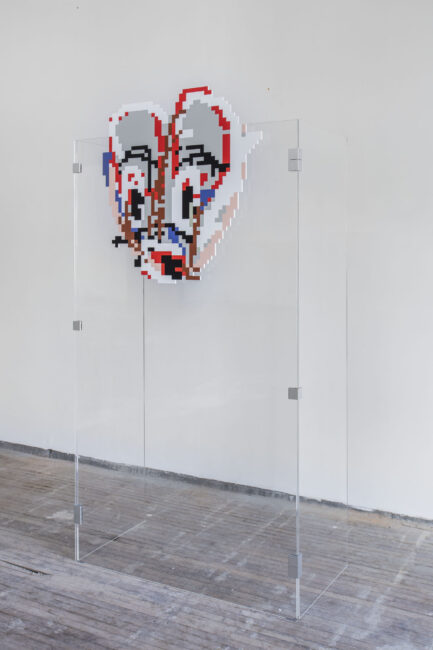 I think we still make a sound. The space is faintly filled with soft sounds that seem to come from tapping on the pillars. The small players hanging from the pillar are playing screen recordings of blank logic, blurred truths, and the struggle of connecting with public discourse. The recordings burst like a bubble at the sound of an easy keystroke. The only concrete images that remain are the perpetually moving “loading” icons and random speech characters, which are clear and muddy on the high-definition screen, except for the names of the works, which are still writing something, constructed by fragmented labels. Perhaps the codes of consensus, geopolitics, chains, batteries, prophecies, failed algorithms, shamans, conspiracies, fabrics, computational winds, compulsions, searches, free will, open mikes, walls, confessions… no longer need to be penetrated. They just stand on pillars, unable to make the sound of a footstep. The truth chooses to be obscured, just as dust fills this space, signaling indistinctness, and the numerical codes that could have been standardized and made clear wear a hesitant, blank face. 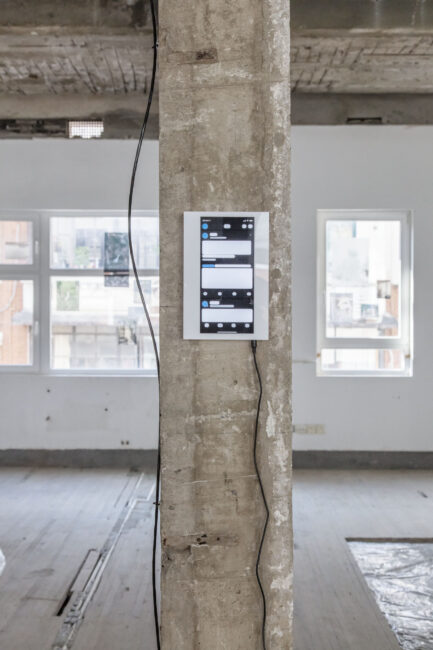 What’s outside the window? The details of life are the only thing left to say. We can’t see out the window, but we can see the fine details of real life that aaajiao tries to show on it. Meat, birds, snowmen, plants… seasons and time don’t count here, leaving only hollow, crumbling details. It was perhaps aaajiao’s first image diary as a person rather than a “user”; he might have been a park lover, liked plants, gone to a lot of trouble cutting up coconuts, and built snowmen on a snowy day. These fragments are shuttled from the phone onto the film, and are finally revealed by the light of the window, along with the view from outside. Yet for us, these fragments of memory are just distant and irrelevant, I suppose; but this time, when they are not shared on the internet to take up a reckoning, but rather to play with the temperature of the material amidst the rubble, they also outline a small exit that allows us to choose to look, or not. There is still cracked and falling sugar paper on the windows, reflecting the light that was or is in eyes. Life, color, and light are crumbling. When they are joined together, do they have the power to speak, and be worthy of being seen? 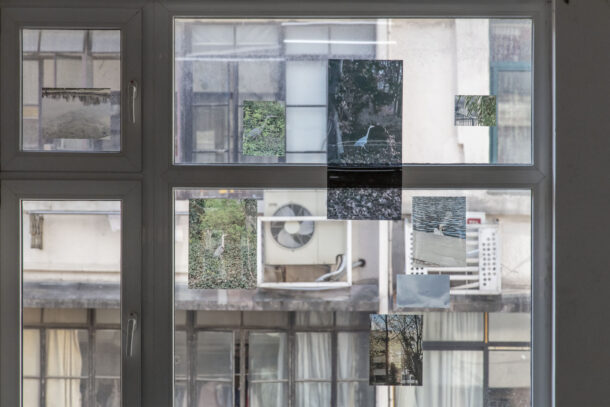 In the hot air, the plastic chairs, futon fans, exposed switches, and plugs in the exhibition all seem to open their mouths and come hesitantly towards me along with these tiny fragments, words, and pixels. In the midst of the suffocation, I still feel comfort from the everyday as well as from afar. The poster for “I was dead on the Internet” shows a tiny ladybird on a bicycle following the wheel—in the speed and blurry dynamics, life is often invisible, but present. I still remember the opening day, when aaajiao connected from Berlin with everyone at the exhibition on Zoom—people are apart, space is divided, plus the unstable network and the dilemma caused by distance… all of these woven on the internet, and turned into an intermittent “How are you?”

I Hate People But I Love You, a videowork created by aaajiao in 2017, is also a screen recording video in which dialogue windows loop in a trajectory of Möbius strips, and simulated robots continuously emit mechanical questions. In that world, the internet is equal and free, it breeds love that transcends the virtual and the real. And now, when “I was dead on the Internet,” how much data remained to be loved and spoken about?

xindi is an artist and writer.