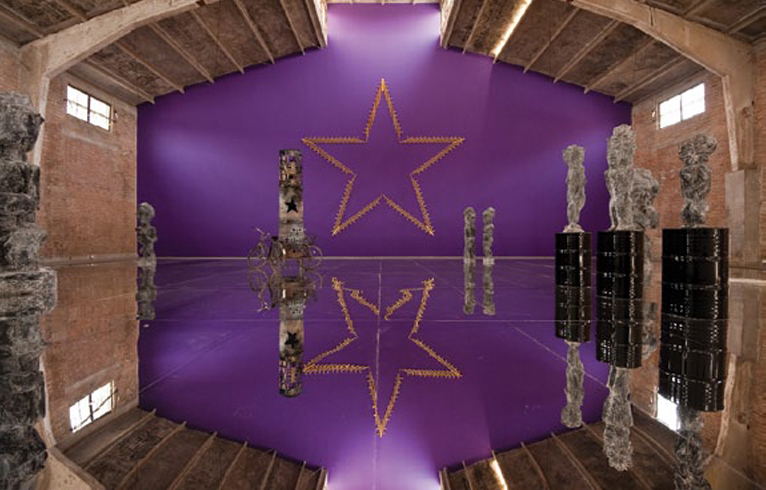 LEAP: So, what got you into making art?

Kendell Geers: Well, it’s very simple. In South Africa during apartheid, every white male was supposed to go into the military. Conscription was mandatory and involuntary. I was against apartheid and therefore against the military. And the only way I could not do my military service was to study. I ended up studying art as a way not to go to jail, because if I didn’t go to the military I would have had to go to jail for six years. Eventually, there actually was a trial and I was sentenced to six years in jail.

LEAP: So you were a conscientious objector.

KG: I wasn’t a conscientious objector. I was part of the anti-apartheid movement and said, “I will not go to the military and I will not go to jail.” Going to jail as a conscientious objector would have somehow been supporting the system. So, I decided not to go to jail. I decided not to go into the army. I went into exile instead.

LEAP: Right, you were twenty and it was 1989. What was New York like then, and what did you take away from your apprenticeship with the American artist Richard Prince?

KG: It was a great time for New York. I forget who the President was then, but I think Giuliani was the mayor. He was starting this kind of clean-up campaign, but things were still very much rock ‘n’ roll. CBGB’s was still around, 42nd Street was a red light district, and there was still a gay underworld. The city had not yet become this kind of bourgeois family kind of place— things were a bit wild. What I took away, I think, from Richard Prince was his humor. He had this satirical black humor— in both his personality and in his work— especially in the way he worked with text and color.

LEAP: Back in South Africa, Nelson Mandela was released and you no longer had to live in exile. After a year in New York, you returned to South Africa, where you started writing for newspapers and making art. What kind of art scene was there in Johannesburg at the time?

KG: The period between 1990 and 1994, when you had the end of apartheid and the beginning of something else, was one of the most extraordinary things I’ve ever experienced in my life. It was also a time when one had no choice but to fill various roles within the art world. There was no context, no structure for art and artists. There was a very small, little art world. It was extremely regimented in terms of what was permitted, and there was no space for dissent. There weren’t artist-run spaces. Artists were, in a way, castrated, you could say.

LEAP: The artists were castrated?

KG: Yeah, by the galleries and collectors. The market demanded an extremely decorative and easy solution to the question of making art. In order to survive and make a living, you were forced to make pictures that could hang behind the sofa and would look good on the wall. They couldn’t be too big or too small. There was this really dictatorial demand on what you could or couldn’t make.

LEAP: So at that time, you were also using performance pieces as a means to alter the structure of the South African art scene?

KG: I was using whatever means necessary, whether it was in my work as an artist or in the things I was writing about— I was trying to say that there were alternatives to making [decorative] work and that one should not make art in order to sell. If it sells, that’s great. But if it doesn’t sell, that shouldn’t deter you from what it is that you’re trying to do.

The Pentagram and the Star

LEAP: Can you tell us about Stairway to Heaven, one of the works here in the main space at Galleria Continua? Set against a purple background, it features a large star formed out of police batons painted in gold leaf.

KG: It represents the Pope— gold and purple are the Pope’s colors. It’s about state violence and, I mean, let’s face it, capitalism is the bastard child of Catholicism. It’s the Catholics who originally taught us how to hate. The Catholics taught you to look in the mirror, hate what you see, and give all your money to the Church in order to be saved and forgiven.

LEAP: Daniel Buren once told me that any art presented in public is by definition political. Still, your early work seems more overtly political.

KG: Do you think a giant pentagram put up on a wall is not political in a country where pentagrams are on the flag?

LEAP: Those aren’t pentagrams on the Chinese flag. They’re stars.

LEAP: Right, so it’s a star and a pentagram. It’s a matter of semantics.

KG: I use the word “pentagram” because I find it interesting that in both politics or in, let’s say, something like alchemy, it has a set meaning— you draw a pentagram for protection. In this work, it’s a symbol of man— the two legs, the two arms, and the head. And that’s the way you would see them on all the flags, whether it’s the United States flag, the Chinese flag, the flag of the European Union. When you invert it, so that the pentagram faces down, that’s a symbol of the devil. It’s a symbol of chaos. What fascinates me is that these symbols work even on an unconscious level. And with the inverted pentagram, you open yourself up to invasion by evil forces… dark forces.

LEAP: But isn’t that response to the pentagram, as you’re defining it, specific to Western culture? Will the pentagram function differently in a non-Western context?

KG: The ancient Egyptians, who were certainly neither European nor Western, were using this symbol in the same ways, depending on which way it was pointing. And in the world of spirits and in the world of reading things, it doesn’t matter what culture or language or age we’re coming from, we’re still trying to deal with the same things as Newton and even Plato. We may have evolved as a culture, but I don’t think we’ve evolved as a species. We like to think of ourselves as more intelligent, but we just have access to more information. The thing is, as a visual artist— as an artist— I can speak to your rational brain. I can speak to you with work that you understand. But at the same time, your animal brain will also be reading the same thing. At the back of your head, you understand with your unconscious, with your instinct. And you’ll be arriving at irrational conclusions that you can’t explain because it’s a different language, it’s a different part of the brain from the rational part.

LEAP: Right, and your irrational conclusions or responses are obviously very different from your rational ones.

KG: It’s the same in any great work of art— whether it’s the Mona Lisa or whatever— you can’t explain it.