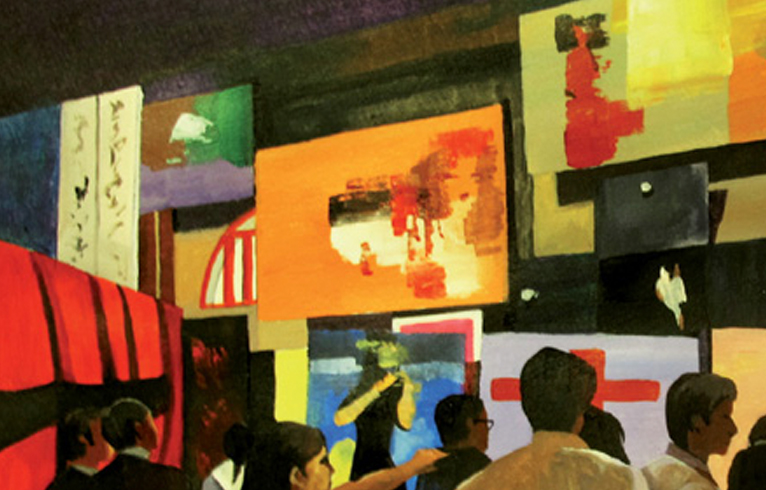 Four years ago this summer, a thousand Chinese descended on the quiet German city of Kassel for an art project titled “Fairytale,” specimens in the world’s leading periodic exhibition, Documenta. A few weeks ago, what felt like another thousand descended on another quiet German-speaking city— Basel— for the world’s leading art fair. Magazine- organized groups, collector collectives, non-participating gallerists, emerging artists, government officials, accredited press: for the first time in as long as anyone can remember, the Chinese presence in Basel— on every level other than that of the art on view, of which there was very little—felt like the “invasion”one Chinese artist had staged as performance not so very long ago.

On the Wednesday in the middle of that long week, 100 of these visitors boarded two jumbo coaches on a tree-lined street behind the Messeplatz and went off on a summer afternoon’s excursion to the home of the “Guest from the West” (as his Chinese name translates), former Swiss ambassador to China and Chinese contemporary mega-collector Uli Sigg. “It feels like we’re being smuggled somewhere,” one critic joked, climbing the bus steps and looking out upon rows of napping Chinese-art dignitaries, many in sunglasses. The first stop was Lucerne, where Sigg had curated, with the teller of the “Fairytale,” an exhibition called “Shanshui” (literally “mountains and water”) in the Jean Nouvel-designed Kunstmuseum by the mountainous shores of the Vierwaldstättersee. If most of the guests seemed more interested in photographing themselves amidst this landscape than pondering the landscapes on view inside, Sigg didn’t seem to mind. We reassembled and moved onward.

Debussed in the hamlet of Mauensee, a short hop from Lucerne, we followed Sigg on an artful journey around his island schloss. Outside, an iron sculpture of teeth by Wang Jin and a house of marble cards by the Fatman dotted the lakeside, while a boathouse served as a bathhouse filled with naked fiberglass figures by Li Zhanyang. Having completed a circle around the property, we retired en masse to the patio and set in on a summery buffet that culminated in an Alpine rendition of hong shao rou.

The buffet decimated, Sigg, ever he ambassador, clinked a glass and sounded words of welcome, followed by words of caution (about the steepness of his staircases) and words of warning (about the necessity of refraining from touching the work on view). The five floors of his home were temporarily the group’s, and any open door was ripe for going-behind. We stormed the castle in factions, some streaming phone photos and pithy commentary to Weibo, others quizzing their comrades about which unlikely work belonged to which artist. Here, the Qi Zhilong from the cover of the “Mahjong” catalogue, there an early hanging rubber conveyor belt and nail contraption by Sui Jianguo. Up in the attic, a full, glorious mini-retrospective of Wang Xingwei. On a lower landing, a little-known Li Songsong of a pie chart from which a pie’s worth of paint has fallen off the canvas and onto a newspaper on the floor below. Fortified by food and art, the group wandered down the lakeside path, boarded its coaches, and returned north to Basel. Every good fairytale has to come to an end.