Asked by LEAP to reflect on my curatorial role and on exhibition making as an independent curator, I proposed a discussion with Jens Hoffmann on his experience curating the Shanghai Biennale. As seen in the dialogue, it is very difficult for an international curator to understand the complexity of the local context in China. What could not be addressed in that conversation, I attempt to discuss in this short text— mainly, my concerns related to exhibition making in the local context.

In 2004, I joined Shanghai Duolun MoMA, which was my first encounter with a state-funded institution in China. During 2004 to 2007, Duolun MoMA’s focus was embedded in the local art context, in the Shanghai-based artists community, which was exploring new formats for exhibition making. Running the curatorial department and being part of a team was one of the most important experiences for my understanding of “the institution.” It has been of great importance to my work as an independent curator, and to my thinking about the innovative institutional models that could have relevance in the local context.

My independent curatorial work in China after 2007 forced me to redefine my role and reexamine the relevance of my work in the local context. Even today, I am still dealing with the questions: What does it mean to be a curator, for myself first of all? In this specific moment, what kind of exhibition is relevant to present? How and why do I want to work with individual artists, and what do these working relationships and friendships mean to me and my practice? How will I work with art institutions in the local context, and what does it actually mean to work with them for me, the artists, and the institution?

Returning to these questions over and over again has shaped my curatorial practice, which I would more or less describe, borrowing Maria Lind’s words, as context-sensitive.

For each project or exhibition I curated after 2008, all ideas, before being implemented, were continuously analyzed and questioned through discussions with artists I find important to my practice. Every specific detail is analyzed through the lens of location, the specific timing and length of presentation, context, form, and what kind of discussions may arise from it. Working in this way, my curatorial role has ranged from facilitator and mediator to someone, described in the words of Qian Weikang, who “restages a crime scene,” carrying out research on local history, reviving forgotten local historical context and its relevance to our curatorial work today, and on to author of the exhibition. 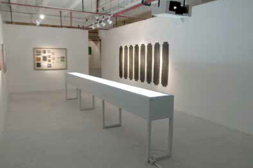 These different roles developed along a few different parallel paths, where research happens simultaneously— working with local emerging artists, conducting local art history research and research into the rest of Asia (especially Southeast Asia), and introducing the practices of international artists that I find urgent to introduce in a specific moment (Yoko Ono, Tino Sehgal, and Keren Cytter, to name a few). These ongoing engagements overlap in many different ways. My curatorial research on Southeast Asia started in 2007 with the group show “Migration Addicts” at the Venice Biennale. It has continued with a number of case-study exhibitions presented in China since 2008. Many would argue that is not necessary to look at the region through exhibition, but I believe that regional and local perspectives are still very important.

In my collaborations with local institutions in China I rarely see myself as guest curator; rather, I see my work as more of a curatorial intervention into existing institutional programming, based on ongoing dialogues with museums and spaces on the relevance and importance of presenting certain artists and projects (new to the institution) at a specific moment and time. I find these ongoing conversations crucial as an educational tool for understanding the institution better, and for letting the institution know what my subjective approach can actually bring to the table.

Being independent, employing the above-mentioned strategies, and due to an overproduced art scene— wherein the exhibition as a display format is rarely examined and challenged— in the past two years my exhibitions have become long-term projects. These attempt to slow down production and give space and time to initiate dialogue on certain issues raised in the exhibition. This kind of working methodology is always a frustrating process as while many of the institutions agree to host projects, they end up acting as space providers rather than exhibition hosts. This in turn limits the project’s public reach, and thus its reading.

At the moment in China we are confronted with large-scale institutions, and hundreds of museums are opening or are set to open all across the country. But what are these institutions, for whom? I see most of them, after opening, turning into empty boxes without any curatorial vision or distinctive voice, instead aiming for entertainment spectacle. What is lacking in the current art infrastructure in China is something that Hoffmann in our conversation said he didn’t see: small or mid-scale institutions, similar to the kunsthalle in Europe, that even without collections can develop their own role under the local circumstances. This, again, directly relates to programming and structure: they are first and foremost spaces for knowledge production. The appearance of Times Museum, or the recent open-mindedness of private institutions such as OCAT, could be seen as slight change of direction. I hope they indicate a greater shift in the future, similar to the New Institutionalism in 1990s Europe.

Innovative institutional formats have been of great interest in my curatorial work. My latest book, Institution for the Future, co-edited with Sally Lai, discusses these through various contributions, reflecting on recent global changes and cultural funding cuts, so this is a topic not only relevant in China. Again, there is no universal answer to this question, as each context offers its own unique perspectives. “The institution” is an ever-evolving entity as the world around it changes alongside politics, society, and culture— which just so happens to be the only way that the institutional model can generate a certain relevance. The same is true with curatorial work. It, as well as our working context, evolves and changes with the times. What is most important is that we keep our “Museum of Obsession” alive, as Harald Szeemann used to say. The Museum of Obsession operates in a utopian sphere that our exhibitions only can hint at. What we need to keep in mind is how our curatorial work can make relevant contributions to this discussion. (Translation by Connie Kang)