Entering Hu Xiaoyuan’s most recent solo exhibition, “No Fruit at the Root,” begins with passing through a somewhat narrow corridor in the shadow of tall separating walls. This winding corridor joins three spaces: one dark, one bright, and one with darkness set in the center of light. The layout is in graceful disorder, and the works on display are connected by a clear-cut and intrinsic logic. Bit by bit they piece together a solid, tangible structure, in marked contrast to the apparent illusion and weightlessness of the exhibition’s creative concept. Perhaps a similar contrast corresponds to and pervades all aspects of our observation and judgment of any entity.

Hu Xiaoyuan is adept at seeking out and probing subtleties on a visual and emotional level. This is embodied fully and naturally in two video installations, Drown Dust (2012) and See (2012). Passing along the corridor, one is drawn into the atmosphere of the first: Drown Dust, a pitch-black space consisting of three videos shot with a macro-lens, displaying corners and fragments of material from a past happening. Each film is shot using a dolly moving at an even speed but in a different direction. The trajectory of the lens moves from left to right in succession: horizontal, vertical, circular. These different orientations in line of sight emphasize the feeling of the space and the abstract images. Furthermore, these videos, installed together, create a subtle balance and order.

The details of these images, framed in macro, require careful observation before their original forms can be assembled. The left video depicts the edge of a rolled up piece of paper, the right video some white coral, and in the middle, a video of sodden clothing hanging to dry. It would appear that, apart from what we can directly gain from their outer appearance, there is no way to seek out a narrative in these videos. In fact, the secret connection between these three entities is derived from a specific incident, the significance of which has been lost. Their only narrator is the artist herself, which almost equates to this event never having occurred in the first place. Leaving Drown Dust, the corridor emerges at a T-intersection. If one chooses to turn right, a circuitous path suddenly opens up to a wide panorama, drawing you into a bright, light space. See is installed on two sides of the entrance to a small hall in two box-style black lattices, the left side dark, the right side light. In the comparatively dark space, a projection on an almost-white screen demands careful attention to be able to distinguish the slow left-to-right movement of an uncertain form or shadow.

Directly opposite, in the comparatively light space, a television has been placed on the floor facing away from the observer, its screen almost flush with the wall. All that can be seen is a small halo of bright light. The main focus of this set of video installations is apparently to discuss or test the lack of completeness in the act of seeing as well as the audience’s dependence on information. As the work’s title indicates, the hints at the riddle that “seeing” gives are extremely minimalist, almost without substance and without any supplementary material or prompts. The riddle’s answer rejects any attempts to be solved. 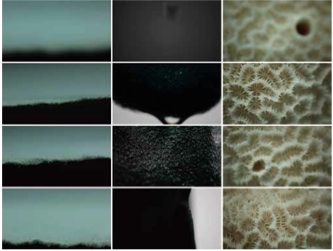 Returning to the T-intersection and this time turning left, one enters another bright, clear and neat space. On the floor, set out seemingly at random, are some pieces of irregularly shaped scrap wood, comprising an extension of the “Wood” series. Hu Xiaoyuan used ink to trace an extremely delicate record of the wood’s natural patterns on translucent silk, then applied white paint to cover up the texture of the wood itself. With the painting complete, she attached the patterned silk smoothly onto the wood. In this way, the repetition and contradiction behind the process addresses the unequal status of values and transforms the true paradox of sight. To the observer, the only thing that matters is the time and effort required to produce this result— full of detail and concrete beauty, a sense of completion and peace reaching an apparently accidental form which offers a visual shock. The title of this set of works is also the title of the exhibition: No Fruit at the Root (2012), emphasizing the trail of trivial matters left over by behavioral processes without definite orientation.

In the same exhibition space, compare the artist’s first exhibition “Hu Xiaoyuan” (2012). “No Fruit at the Root” demonstrates a visual continuity blending together naturally with the variations in the content of the works. This control is even more skillful with regards to the exhibition as a complete structure, and this capacity for control is reflected in the division of spaces, in the differentiation in the arrangement of ideas within the visual experiences, and in the clear determination and restriction in the way each work is presented.

Drown Dust is reminiscent of Hu’s four-channel video recording from a previous exhibition, I Don’t Know How Long You’ve Been Walking On, and I Don’t Know Where You’re Going (2010), which left a similar first impression. Cutting objects into chunks, examining the minute details of texture, and preserving and juxtaposing different trends and dynamics allows these two works to bridge the distances of time and space and forge an intimate bond. Even so, the clear difference between the two works lies in Drown Dust’s lens serving as a follower, viewing and recording the object as opposed to acting in the limited role of endowing meaning. This change of content is embodied in the secret narrative inherent in Drown Dust, adding yet another obscuring layer which leaves the artwork even more difficult to decipher, and leaving what remains to give the audience an even greater scope for guessing and “misunderstanding.”

Similarly, See is obscured on many levels and acts a counterpart to No Reason Why (2010), a single-channel video installation from Hu’s previous show, which featured a white, indistinct object squirming out of a white backdrop. See receives a more rigorous probing, the audience hoping to question it but finding it beyond their power to judge its source and position, with the only clue available the shadow of an answer. The viewer is compelled to instead shift their attention to the action itself— that is, to observe the dialectical mechanism. The elements that are concealed seem deliberately and unnecessarily complicated, without gaining in significance as a result. Similarly, the method and process by which they resolve manufactured questions fails to reveal how See is to gain value. 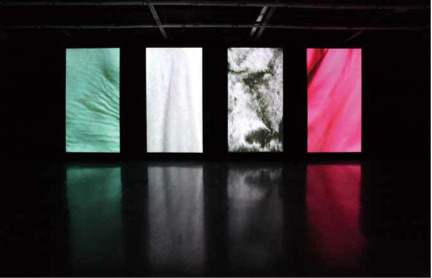 Furthermore, in the exhibition “Hu Xiaoyuan” primary form and medium were completely visually integrated; in “No Fruit at the Root,” that sense of utility and mark of creativity is relatively weak, leaving language to act as the primary connection between artwork and space. For example, the pieces of wood scattered about the floor each have their own original source, but since they have been integrated into a changed property they have lost their genuine functions and, through the alteration of the significance of the object and its attached value, become observed shells. In contrast to the previous “Wood” series, the individual components of “No Fruit at the Root” lack a sense of completeness; each wood piece only acts as part of the process and yet appears independent, mutually unrelated, echoing Drown Dust and See in the same space through the sense of an incomplete view— a thread which runs through the entire exhibition.

The integrity of observation hinges upon the acquisition, classification, and judgment of visual information. Within this process, there will inevitably be some active or forced abandonment of content perceived as relatively unimportant: the erased narrative of Drown Dust, the riddle’s answer in See, and the naked logs of “No Fruit at the Root.” There is no doubt that the viewer is the terminus of the production and consumption of information, just as the artist’s work embodies the first level of a process regarding original material— the magnification of visual details, the choices made in the creative process, the transformation of an objective item from its former natural state, and the assignation of new properties of language and composition to that item.

Art acts as one way to return a spiritual representation to its social environment, and can often give rise to a sense of disconnection. In a present overwhelmed by the complicated, practical elements of a common existence, the average length of a visual impression is becoming shorter and shorter. This implies that the length of time in which visual information is discarded is becoming harder and harder to predict: neglect is our normal state. Neglect originates in value judgments, since standard variations and identical objects may present contradictory properties. Hu Xiaoyuan draws a relatively abstract and precise style of language from the symbolism of discovery and its relationship to individual experience, assigning the idea of “unimportant existence” conclusive visual significance and value. In fact, this existence actually throws doubt and negativity on the possibility of observation and the establishment of effective communication between audience and artist, so much so that it eliminates all necessity and importance. It is as the sentence from the exhibition catalogue states: “Neglect, like a flowing river, never ceases.” (Translation by Sarah Stanton)