Only a couple of years since the ZKM first fell for globalization, we step again onto the terrain of global reality as soon as we enter “Move on Asia,” an exhibition imported from Alternative Space LOOP in Seoul. Here, more than 140 works are gathered under the “Asian” label, with artists from China, Hong Kong, India, Indonesia, Japan, Korea, Pakistan, the Philippines, Singapore, Sri Lanka, Taiwan, Thailand, and Vietnam, demonstrating a wide array of disparate contemporary positions.

The accompanying introductory text refers to the “increasing significance of Asia in global contemporary art.” Increasing significance for whom? Another statement suggests that Asian art should liberate itself from Western role models. Liberate itself how? Wherein the West do these models still exist? Why construe antagonisms, or, as Yang Fudong laments in the catalogue, use horrible formulae such as “otherness”? Why not talk about political suppression, economic restraints, or censorship? More than a few artists in Asia address phenomena that oscillate between political control and individual sensitivities.

It should also be noted that many of the artists presented here live in the West, or otherwise engage heavily with Western thought— Sophie Ernst, for instance, the only representative from Pakistan, or Le Vo Tuan, from Vietnam. Sophie Ernst has been living in Europe for years now, and it is from here that she looks at Pakistan. So which criteria determined the selection of her works? And Jet Pascua’s work, which was created in Norway and the Philippines, begs the question: Who liberates whom from whom, and for what purpose? There is also Wu Dar-Kuen, who calls on canonical texts of European modernity— in particular, the work of Walter Benjamin.

Time and again, poetic traces from the beginnings of film shimmer through the depictions of ephemeral events. New American Cinema, Chinese underground film, and video art of the 1980s would not have been possible without the invention of this iconic vocabulary; here, it is perpetuated in the work of Tisath Thoradeniya, just as Nam June Paik’s Good Morning Mr. Orwell from 1984 contributes to a global pictorial memory. Yu Araki’s works are strikingly reminiscent of Jonas Darberg, yet they seem even more akin to Eadweard J. Muybridge’s studies in motion. Despite undergoing innumerable experimental variations, the images born from these pioneers lose nothing of their iconographic originality.

Sudsiri Pui-Ock’s work is characterized by tireless combinations of heterogeneous cultural influences. Effects of alienation are shaped into subtle compendia of things that belong entirely to our collective present. This is evident in the works of Chitra Ganesh, Atsushi Suzuki, Jin Kurashige and Lieko Shiga, or in the light experiments and lyrical waves of Chikara Matsumoto, Daisuke Nagaoka and Akira Miyanaga. Everything is seen anew, dissected, sampled. Tsui Kuang Yu’s The Secret Cut intensifies the splitting-up of ideas into content and physical representations of these in a perpetual change of perspectives, which underscores Wittgenstein’s claim that “the world is the totality of facts.”

This exhibition proves again that images that circulate globally do not necessarily transnationalize the gaze of their beholders. Sekwon Ahn scrutinizes his fear of an ominous loss of identity in the face of sprawling image production. Like Sakarin Krue-On, he invites us to participate in witnessing the emergence of a substitute visual world. He responds directly to cultural processes of individualization and indirectly to the insoluble interdependency of seeing, knowledge, and cognition. Frankly, though, formal analogies are not sufficiently apt to make coherent assertions about the works. In fact, and contrary to all generalizations, the local is not global and the global is not local, since it is always on-site cultural context that weighs more heavily and— through the body— grounds our experience.

While substitute worlds impress with their utopian virtuality, specific geographical locations are fragmented by mediatic superimpositions. In Perpetual Peace, Michelle Dizon speaks of a rampant cultural amnesia that Edward Said’s student Mokhtar Ghambou locates in proximity to fundamentalist currents, which in turn connect with pop culture: “we live in a world of cultural simulation, where image and sound bits lend themselves to spurious constructions of identities. […] pop- cultural fantasies occupy the void created by second hand life worlds.” 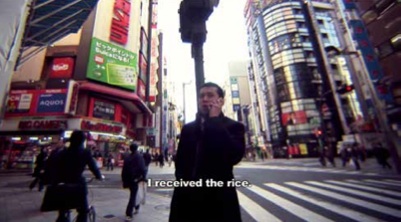 Perhaps it is the philosopher Cornelius Castoriadis’ idea of the imaginary, which accommodates both critical distance to the past and anticipation of the future, that finds most relevance in “Move on Asia.” This accentuation is a salient feature shared by all the works here, however different they might be individually. Vietnamese artists Le Duc Hai and Le Ngoc Thanh dive deep into a plethora of associations evoked by this idea. Because historic influences are only to be reconstructed in hindsight, narration and rhetoric collapse into one another. Here, Bokyung Su’s huge panoramas alter with microscopic perspectives. Thisath Thoradeniya from Sri Lanka traces mysterious archaeological artifacts, which she occasionally extracts from electronic scraps.

Also shared among the works mentioned here is a very particular engagement with perception and seeing. For Castoriadis, the imaginary is not a mirrored image; rather, it is a faculty innate in humans. It is exemplified, for instance, as an incessant, indeterminate production of forms and images in Anggun Priambodo’s choice of images. Reza Afisina uses his body to achieve the same results. It is no accident that in his native Indonesia— where the experience of violence and religion is constantly renegotiated—so many alternative art spaces emerge. Ari Satria Darma reinforces Susan Sontag’s thesis that remembering increasingly relies on evoking an image, rather than referring to a story. In this vein, the mysterious image sequences of Lu Chun-sheng elude the rationale of the narrative and immediately appeal to the subconscious.

The subconscious is further invoked by the Filipino artist Manny Montelibano, who chooses intense images that linger in mysterious loops, or seem to be charged in numinous auratic ways. Similarly, Tomoki Kakitani or Kohei Kobayahsiaus experiment with the possibilities of poetry. Chen Xiaoyun picks up poetic stories, whereas Cocoy Lumbao merely saunters through town. For some, everyday reality is the most interesting field of reflection. Meanwhile, others are attracted by the culture of kasogenjitsu (artificial reality). The cities of Ayoka Yoshimura coalesce into megacities teeming with chaotic activity.

I should like to reinforce my argument with Marshall McLuhan’s theories from the 1950s and 1960s about media as cultural tools. By the 1980s, their impact on our collective consciousness was already understood as implicit. And in his theory of the cinematographic image, Deleuze points at the endemic infection of images through images. Less and less, an image differs from its likeness, as does being from appearance and the individual from the stereotype. In the era of digitally-fluid imaginations, people decreasingly structure their lives’ realities along real events, but rather according to strategies of visualization. These strategies of visualization recall Jacques Lacan, who developed the concept of the disturbance of the visual field by the “screen of signs” that “casts its shadow of death” onto it. This is exemplified by the heavy fare dished out by Hanura Hosea or Jompe Kuswidanan-to, where literal defects of vision cut the flow of images up into heterogeneous fragments. It would seem that art is extremely contemporary whenever it focuses on principles of perception.

In summary, one could say that this exhibition points to the immense differences within contemporary Asian art, which require a new hermeneutics to accommodate, say, Tushar Joag’s proximity to the aesthetics of animation software or prototyping technology. Wherever the works exhibited cut through ostensibly clear connections between sense perception and existing objects, the dimension of the imaginary is opened. This demonstrates that, apart from decoding image sources, the artists themselves and the uniqueness of their work must take center stage again. When critics subliminally suggest that the relation of humans to new technologies is to be understood as an adaption to an unnatural technological world— one superimposed on our “natural” being— they forget that it is exactly the imaginary that reversely provides the possibility for adapting technology to the life-world we might create.