For those counting, the Guangzhou Triennial has lost its tri-annual rhythm. In fact the latest installment comes not three but four years after Gao Shiming’s “Farewell to Postcolonialism” of 2008. This fuzzy math was reconciled with a series of precursor exhibitions that began with “Meta Question—Back to the Museum Per Se,” a title that aptly reflected the slightly controversial appointment of Guangdong Museum of Art’s new director, Luo Yiping. Whatever the reason for the delay, the change of directors has certainly impacted the museum’s contemporary programming and with it, its influence on the local art scene. This was most noticeably felt by the absence of local artists and satellite events in Guangzhou during the Triennial’s opening. Nevertheless, “Unseen,” the current and fourth installment of the Guangzhou Triennial, curated by UK-based Jiang Jiehong and Jonathan Watkins, was indeed a show worth seeing.

In the tradition of rambling, large-scale, international contemporary art events, a lack of thematic specificity made a conveniently inclusive proposition. Surely most artworks could fit under this curatorial umbrella, but while Jiang Jiehong muses over the multiple possibilities of what the unseen is or is not— “…it is a mysteryless mystery”— the show itself opens with a concrete premise, An Oak Tree (1973) by Michael Craig-Martin. This artwork, comprising a glass of water placed on a glass shelf accompanied by a wall text in the form of an interview, reveals how much our experience of art is dependent on faith. The interview disputes the fact that the glass of water is an oak tree.

Q: Do you mean that the glass of water is a symbol of an oak tree?

A: No, It’s not a symbol. I have changed the physical substance of the glass of water into that of an oak tree. I didn’t change its appearance. The actual oak tree is physically present, but in the form of a glass of water.

While Craig-Martin’s dialogue is almost Beckettian in its absurdity, always with a straight face, it indexes the transubstantiation of artworks.

Q: Haven’t you simply called this glass of water an oak tree?

A: Absolutely not… One could call it anything one wished but that would not alter the fact that it is an oak tree.

Curator Jonathan Watkins cites Duchamp’s urinal to Fountain transformation as a predecessor, not only to the readymade tradition but also, to our unwavering faith in the miracle of art. Accordingly, the “mystery-less mystery” that Jiang ruminates on is what the art world capitalizes on, an almost religious faith in the power of art. As Craig-Martin co-opts the glass of water and circulates it as an oak tree, the institution circulates An Oak Tree as art. Alas, the unseen is our faith in the object and the system that supports its value. Proceeding from An Oak Tree, the exhibition continues to unfold in a quiet and inquisitive way, all along punctuated by works that resonate with the notion that our faith is strangely on trial. 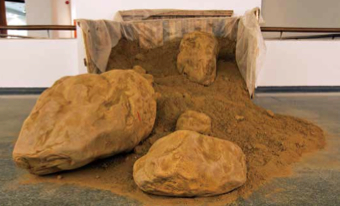 As a sequel to his well-traveled “Second History” project, Zhang Dali presents Visual Machine, an archive of paired images downloaded from the Internet, lined up in a historical timeline timeline from pre-Photoshop times to today, that shows the before and after process of manipulation. The sentiment is simple but, for a global culture still under the illusion that images are a source of truth, the quantity and diversity of examples on display are alarming. From Lance Armstrong’s paranoid portrait on the cover of Outside magazine where editors added the number 38 onto his t-shirt (apparently his age, which questioned his stamina to compete) to the iconic image of the Kent State massacre, doctored at the time of publication for aesthetic effect, our visual history stands before us like a collection of distorted facts. The earliest example is Felice Beato’s image of the 1857 Indian Rebellion, which is not only among the first possible records of photographed corpses but also of constructed photography. It is purported that Beato had additional corpses dragged in front of the ruins of Sikandar Bagh palace for dramatic effect. While this nineteenth-century British-Italian photojournalist was famous for recording the Opium War as it unfolded, the curators instead featured his more sedate images of Guangzhou’s architecture and street life in a separate gallery. These photographs, scantily peppered with people, show us the author’s deliberate forsaking of human subjects in favor of architectural setting, as well as the fact that buried beneath Guangzhou’s hyper-urbanity today are these unseen idyllic moments.

The inclusion of sometimes obscure, historic works give this Triennial its academic flair and welcome departure from the slick contemporary offerings of most -ennials. Another nineteenth century gem is the miniscule woodblock print series Tale Pieces by Thomas Benwick, which relays poignant, and still very relevant, social-political satire in meticulous detail. Benwick’s acute attention to detail is echoed in a larger scale in Shi Jinsong’s Twelve Stones, which presents 12 rocks that are identical in every detail except for their size. Shi’s stones, which have been carved from one piece of marble and modeled off one exemplar rock, strike an almost biblical chord. While Shi seems to be teasing god with his recreation of nature, Rikuo Ueda’s work harnesses nature’s powers for creative purposes. Ueda installed several homemade wind mechanisms through museum windows and walls, which capture outside breezes to generate paintings inside the space. Made like shamanistic implements with twigs and string, these enchanting devices bring us back into confrontation with the notion of faith. Is it art’s self-consciousness that makes the experience of these works more rewarding than simply watching trees blow in the wind?

Speaking of trees: The metaphysical query of a tree falling in a forest echoes throughout this exhibition, with Jonathan Shipper’s Slow Motion Car Crash (2006) being the show’s centerpiece example. This installation consists of two cars headed towards each other at an imperceptible speed, so that no one will witness the accident; rather, it will occur over the course of the exhibition, having by premise, already, always occurred. In Graham Gussin’s Unseen Film (2001), the artist simply purchases all the seats of a film screening and presents the used tickets and a wall text. Ostensibly, “the cinema remained empty, the film was unseen at that time and place.” For the Triennial, Gussin recreates this work at one of the exhibition’s offsite venues, the Grandview Mall, Guangzhou’s largest shopping mecca. While in the museum artists and curators are allowed to preach to the choir, they have never come to grips with their impotence in the charged visual reality of the shopping plaza. Using a marketing strategy of creating expectation through ubiquity and scale, the artist collective GUEST’s project effectively demonstrates art’s chameleonic potential. Throughout the mall’s hulking atrium they installed large blowup banners on every possible surface that simply read “2013.2.28.” This date, which hovered ominously in the space like a prophetic deadline, was in fact the expiration date of a random item pulled off the shelves of one of the mall’s stores. Employing a similarly commercial strategy with equally apocalyptic tenor was Shanghai-based TOF. This duo set up an interactive photo booth that allowed visitors to be photographed against an approaching tidal wave complete with simulated high-speed winds.

He An’s Never Forever plays off the subtle changing variations of both natural and manmade light, helping to transform this pagan bazaar into a citadel. Here the artist inserted a single coin-sized gold medallion into the surface of a walkway that luminesced with the sun’s rays at a fixed point during the day. In tandem, He constructed a large reflecting wall of aluminum sheets, similar to a bare billboard structure, at the mall’s entrance. At night the surrounding neon lights splashed softly against the panels in a multicolored bath. Camped out near this modern version of stained glass was MadeIn’s pop-up cathedral tent, which, fabricated to survive the fiercest outdoor elements, beckoned the faithful inside as a safe haven from the overwhelming reality of the “real world.” Alas, the sanctity of contemporary art.