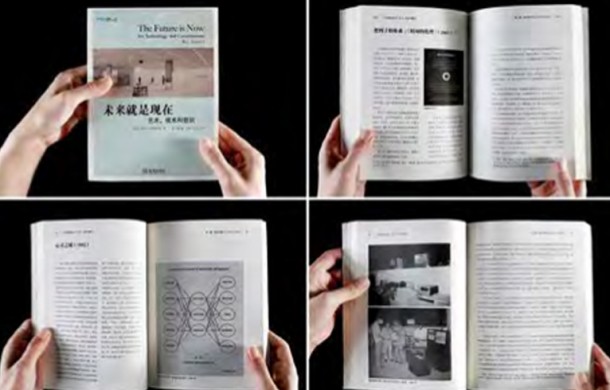 THE FUTURE IS Now: Art, Technology, and Consciousness is a collection of essays and lectures by British media art pioneer Roy Ascott. The book contains his writings from 1964 to 2011, presented in chronological order. What is odd is that writings from each period are all grouped under the same subject heading— as though over the past five decades Ascott’s interests have been very periodic in nature: “The Birth of the Network” (1964-1985); “The Wandering Consciousness” (1990-1999); “Post-Biological Culture” (2000-2009); “The Evolving Self ” (2010-2011). Ascott uses a diverse vocabulary to express his thinking. However, these do not help draw a clear picture of how the dizzying array of new technologies expands and transforms the horizons of artistic form and subject; instead, what stands out is how Ascott’s own mind has changed and matured in response to the rise of specific technologies. Leaving the deepest impression on the reader is Ascott’s analysis of telematic art and network consciousness.

If we are to agree that the future is founded on a series of technologies— such as “dry media” computational systems, of which the Internet is the present manifestation, and biotechnological research of neurological consciousness— then Ascott sees art as a way of looking into the future, by updating our understanding of the concepts of self and cultural subjectivity. He defines telematic art as new media art that has the Internet at its foundation, the network at its core, and a particularly tailored manifestation (or generation). Ascott further attempts to build a language to describe the future through a series of terminology from moist media, cyberconsciousness, and technical intelligence.

Ascott is fascinated by futuristic technologies. But what interests him even more is the effect these technologies will have on knowledge and creation structures, from the cybernetic perspective, once they are given time to mature and grow. The connection between technology and creation arises from consciousness, the technoetic relationship between technology and consciousness, and the relationship between consciousness and new cultural subjectivity. Ascott’s passion for exploring the mind through art comes from his long-running interest in art education: in art education, the courseware and its openness directly impacts whether knowledge can be transferred successfully through stimulation and manifestation (or generation). As part of this process, the interaction between people

involved becomes key. Such a format may have inspired Ascott to organize and design the basis for telematic art— to move from art as a final representation towards art as a process. And for art that focuses on the process, an interesting question is how to nurture consciousness to adapt to the information age, and how to find a language to describe this consciousness.

In Ascott’s text-based thought, the generative properties of the cultural subjectivity of a number of specific, media-based technologies and theories— such as biotechnological consciousness and Internet technologies— have always been understood on a subconscious level. The logical relationship between analyses of the future from a technological vantage point and Ascott’s proposal of interaction-based telematic art should perhaps be sought in its very own artistic implementation— indeed, as evinced by Ascott’s very own artwork La Plissure Du Text, text-based expression serves to expand thought.