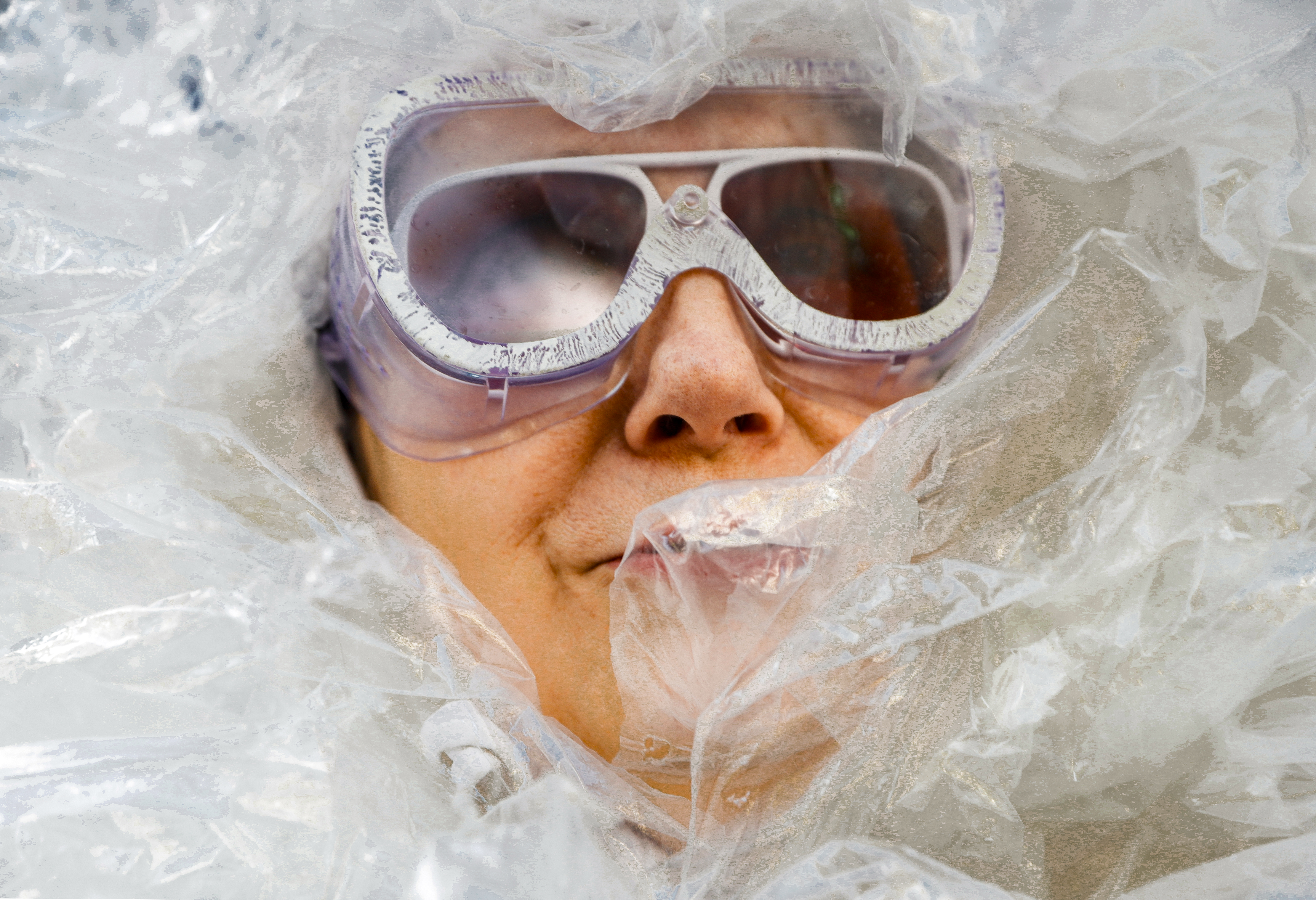 The projection in “Entropy Wrangler,” Ian Cheng’s solo exhibition at Matt Moravec’s new space Off Vendome, is not a video work. It is a program where elements exist in a space defined by forces of causation individual to each figure. Projected in the basement of the Off Vendome space, Moravec describes it as a video game playing itself, a digital world where digitally constructed figures are visibly caught in a sea of coded configurations and glitches: a globe, a tree, a hammer, a basketball player, and other random elements all co-existing and reacting to one another. Tossed around the digital frame, their forms mutate, stretch and jerk about as they get stuck in different combinations. At one moment, a rabbit-headed child gets its head stuck in a cloud, its body jerking as if suffering from convulsions.

The work is programmed to exist in a state of chaos and lull. The objects float like astronauts in zero gravity, in conditions that are at once predetermined but unpredictable given the sheer number of possible interactions, encounters, and reactions produced. Things appear and disappear; they enter into new configurations and jams; get caught in violent pile-ups. It is a clusterfuck of chain reactions contained by a consistent, random order. There is a sense of the automatic—underscored by metallic sounds, such as a metalworker’s hammer rhythmically punctuating the object’s movement in what seems to be a pinball machine with no visible obstacles but loads of pinballs. This is a universe of reactive symbols existing in an image plane that seems at once infinite and void-like.

There is a certain violence to this projection: a subtle perversion that artfully dances over the lines of provocation. The rabbit-headed child is perverse—used to greater effect in Brats, a recent video Cheng produced for the musical outfit Liars. There is also more immediate repulsion, produced in this exhibition by the pungent, rotten gas seeping out of vacuum bags forming isolated mini-environments. In the bottom of one, an octopus framed by a fluorescent pink, inflatable children’s pool; in another, a tin can and an explosion of chili con carne; and a fish lying in a jellified, bloody juice, caught in a slow, nitrogen induced explosion, its eye popping like a thick, white bubble. There is no innocence or romance to this show—yet it manages to embrace the viewer with a sensual onslaught. A final vacuum bag hung on the wall contains a working mobile phone suspended in a crystal clear pool of baby oil. Connected to a charger plugged in to the wall, its number is posted on Off Vendome’s website so that people may text or call the device. Portal-like, it illustrates how “site” is not limited to “space.” It is a sculpture literally engaging with the one of the most rhizomatic networks of the “globalized” world—an unstoppable and expanding telecommunicative web prone to its own chain reactions, predicated on the laws that affect the digital world via material construction.

Aphoristic in form, one section of the online exhibition text describes the shape of society produced by the tools of Bayesian probability, simulation, and flow:

“A culture bathed in these tools can come to recognize and wrangle the shape of uncertainty—like lungs wrangling the chaotic dispersal of oxygen molecules inside us every moment.”

This kind of entropy, presented in crude, temporal and poetic terms, renders space as something bound to a constant but irregular state of revolutionary flux. It is the world defined by the temporal laws of φύσις—of nature—where physical bodies in physical dimensions are controlled by the entropic slow burn of life until death, without cessation. This recalls another line in the exhibition text: “Life is improbable but happens.” Perhaps born of Cheng’s original training in cognitive science, this statement posits a reality: that any given thing exists in a state of certain improbability. But then there is the question: how does one react if/and/when one accepts such a reality to be true?