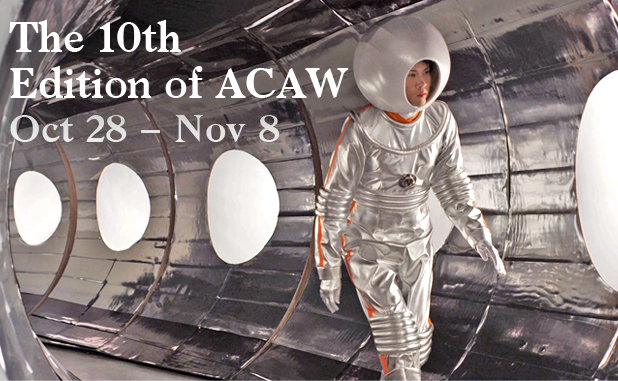 October 31 through November 1, 2015 marked the beginning of the tenth annual New York Asian Contemporary Art Week. With it came the three-day “FIELD MEETING Take 3: Thinking Performance,” a series of performances, lecture-performance, artist talks, and symposia. Central to these meetings was an attempt to look at how artists in Asia have used performance as a means to distill their work down to elemental components: language, archival strategy, visual tropes. How each artist does this, however, differs greatly, affected by the particularities of their chosen practice. After three days, this was perhaps the most prominent aspect of lecture performance: its ability to, as Jean Baudrillard noted in The Transparency of Evil: Essays on Extreme Phenomena (1990), transverse forms and oscillate between art and non-art, adopting an aesthetic of transparency, and ultimately mime art and the artist’s own disappearance.

This tendency was most apparent in the work of and presentation by Berlin-based Singaporean artist Ming Wong, who talked about his project Blast off into the Sinosphere (2014). An ambitious collection of performance, lecture-performance, and video installation combines Wong’s research during a 2013-2014 residency at Para Site in Hong Kong. Focusing on the evolution of Chinese science fiction from late-Qing dynasty illustrations for Lu Xun’s translation of Jules Verne’s Journey to the Moon to Cantonese opera-infused Shaw Brothers’s space fantasies, Chinese space-race propaganda from the 1980s, and interviews with Chinese female astronauts today, his work creates an assemblage of images and themes, blurring the line of the artist and curator.

On top of all this, Wong produces his own space opera in which he, as the female protagonist, wanders through a mock-up of a mid-century Hong Kong science-fiction movie set. Visions of Wong as a female astronaut bring to light the challenging gender politics of women in science in China, and also reveal to his audience the veil he creates. Wong creates artifice around his work, so actor and stage become readily apparent. Within this constructed world, whether presented within the array of video screens of Blast off into the Sinosphere or the work’s accompanying lecture-performances, Wong’s work distills the world into its basic components, akin to theater and stage acting. Play is a veneer to truth, a complex network of dynamics that work together to shape our world and our fantasies.

Beijing- and Los Angeles-based artist Yan Xing offers a different approach to performance. Following in the vein of his previous lecture-performance project Why are we going to Brunei? (2015), Yan Xing took to the podium on Saturday to present his new work The History of Reception (2015). The performance weaves an historical account of an unnamed artist who emerged on the Chinese art scene amid the 1979 Star group. In the style of Walid Raad, Yan buttresses his narrative with real historical fact and well-crafted fiction, blurring the boundaries between the two. Yet Yan never leaves his audience to guess if he is telling the truth. Instead, he constructs his fictional character through academic discourse, calling out the expectation of formal structures imbedded in this particular form of presentation. With The History of Reception, Yan mimics academic form, its language, and its bibliographic requirements in order to challenge their legitimacy. With this, the lines between artist and scholar blur, and so, too, do their claims to authority over knowledge.

Beijing-based Liu Ding more literally explores language through poetry. In Message, Liu has three strangers read the same poem simultaneously. The challenge they have reciting the poem alludes to the struggles of collectivism and synchronicity in modern society. Shanghai-based Tang Dixin, on the other hand, uses performance to highlight more visceral connections between language, literature, and violence.  In Mr. Hungry, Tang clambers from one end of the lecture hall to the other, precariously balancing himself on books, which he throws down from a stack he carries.  Upon his return, he reverses his trajectory, violently hurling each book he had so carefully placed down.

All four of these artists use language and performance to take on new roles as lecturer, actor, organizer, or voiceless performer. Through this, they challenge our historical expectations of the artist in society, freeing them to explore new modes of expression and new mediums of creation.