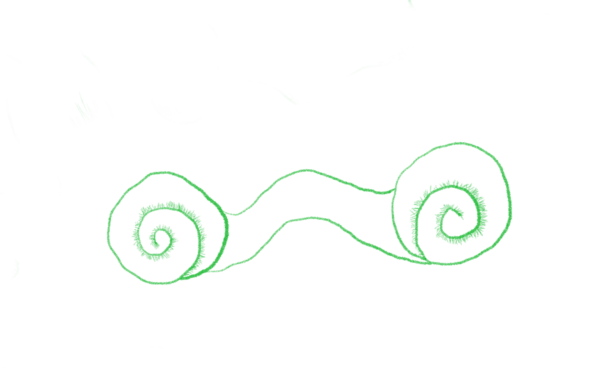 Speaking from the side of a folded quilt, xinxin revealed the secrets of steamed rolls from her childhood.

She didn’t like the taste of chocolate, and so she would choose the scallion-flavored or unflavored ones. Steamed rolls that were often swollen, as wonderfully satisfying as a quilt, white and plump. Since elementary school, xinxin had thought all things in frizzy forms were mysterious and tempting, which accounts for her determination, at first glance, that the girl with hair buns would be her best friend. xinxin decided to call her jojo.

Every morning they would wait for each other, walking through the school gate hand in hand. They would share breakfast. During lunchbreak they whispered to each other instead of napping . They took framed five-yuan snapshots, and printed out a copy for each. From time to time they wrote to one another on paper towels, under the pen names “Stars by my heart” (xinxin) and “Lemongrass” (jojo). From a distance of only a few desks apart, their correspondence ran through the primary-school years, the classmates who passed the messages between them playing the part of a “magpie bridge.” Despite their limited words, they wrote poems that expressed their wishes acceptably well:

This morning
Yesterday’s afternoon
Sausage, cucumber and watermelon
School’s out
Would you join me to buy some chili strips？ 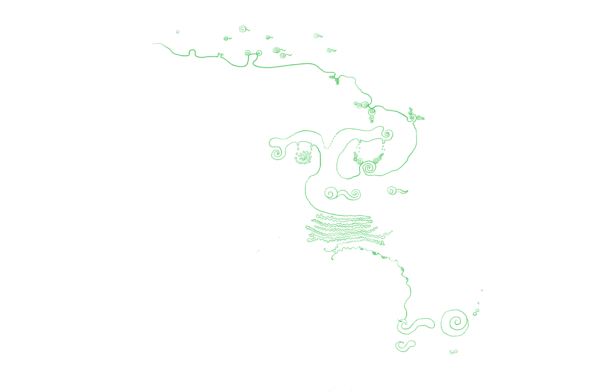 The snacks kiosk provided many other refreshments as well: mint candy, shrimp chips, hotdogs, “shiitake beef”, and TaTa Rolls—a kind of pink, rolled-up bubblegum shaped like mosquito-repellent incense but in a smaller version. xinxin said to jojo, “Look at the spiral; isn’t it very much like a nebula in the science textbooks?”

After graduating from junior high school, jojo left the city for a distant place. They wrote long letters on the most popular “Candy House” and Monokuro Boo-style alumni yearbooks, attaching their snapshots alongside.

Do not forget me. And be happy every day.

jojo gave xinxin a Poliwhirl doll on the day she departed. 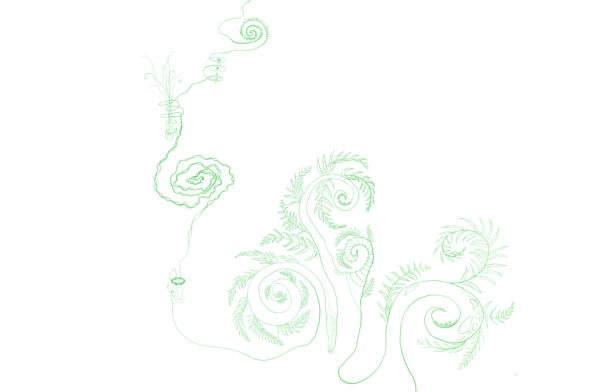 I have raised many plants this summer, most of them ferns. The giant sword fern (Nephrolepis biserrata) has huge branches and tentacles, stretching like an umbrella; the horseshoe fern (Angiopteris fokiensis) gets robust rootstock and thick sprouts; and the feather fern looks like a sparrow feather with perfect wavy lines at the edge of each leaf. The ferns have fresh, curled shoots, the little green swirls poking out their curious heads. They remind me of the edible ferns I used to have as a child; with similar little swirls, those purple-in-green ferns appear more mysterious and taste silky smooth. When swallowed, they seem to quietly brew a magical poison in the stomach. The snail begonia is another huge spiral in my room; following the swirly edges of these light green and whitish spiral leaves, embroidered in reddish jasper around the middle, you can feel how much it curls.

Ferns are gorgeous, as well as common by the roadside and in the wild. It’s not difficult to imagine how ferns would spread unscrupulously throughout hot, humid areas, yet their shape—whether the crouched sprouts, or the finely shredded fronds—reminds me of exquisite rococo decorations and serifed English fonts. While excessive serifs might descend to superfluous ornaments that cripple the language itself, swirls of ferns are authentic organs and bodies; they take the helm of the plants’ language. If only one could walk along the spiral curve and sink into its endless expressions, enjoying a perpetual succession of contemplations that would not allow any intrusions. The most fluid dream for a writer.

In the morning, waking up in a crouching posture, I imagine being a new fern bud: a whole new life looking for further expansion, drowsy yet full of hope. Unfortunately, even such expectation has withered during the pandemic and the thunderstorm season in Shanghai. I long for hugs, for connections with strangers, imagining that limbs from two bodies could merge in motions of the same direction. A movement that could only be achieved by sewing up all the gaps between one another. A skin-felt intimacy. Enclosed in time and space, I repeat routines at home, having forgotten people from afar, and what it was like to be far away. I’m even afraid of not having the courage to act and move when the day comes that I can truly walk carelessly.

When curling up becomes a habitual action, the curled one becomes as alienated as a conch, its inward side always invisible. A curled-up sleeping position evolves to an embrace facing inward, with cuddling arms turning into desires that swim through the flow, where they unfold, meet up, intertwine and contract. Spiral is both an involute abyss and extended ripples, just like my emotional life,fluctuating and refiguring in differently paced spirals without clear definition… Here it seems I am becoming overly confessional again.

During lockdown I spent a lot of time observing plants. The snail begonia presents a slightly hairy texture, akin to human skin. Mine seems finer than that but lacks its beautiful laces and mysterious shape. I searched my body for pretty patterns, but my face in the mirror only showed pimples encasing grease, and thin, monotonous wrinkles. Fingerprints contain spirals, but sadly they are not in the same direction as those of the plants; it’s said that there are also spirals on the top of my head, but I cannot see them in full in the mirror. Since we haven’t been fostered by the same soil and couldn’t channel roots with each other, I can’t intertwine with plants after all, right? Watching them from a distance while imagining that we need each other seems the only thing I can do.

Word of typhoons and heavy rain is spoken frequently. Surrounded by the suffocating news, I can’t help but close all windows, leaving only a crack for the plants to breathe. Smell of rotting mushrooms wafts from the humidity; that’s the smell that comes from plants and human bodies mixed together. Meanwhile, some hairs are waiting to be parasitized. 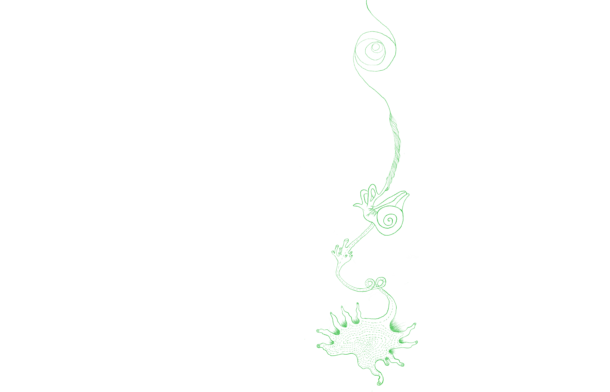 A long time ago, creatures in identical spiral forms could fall in love with one another.

There was a lonesome crab with no spirals or lover.
It wanted to find a home in the cracks of the land so it could burrow in. Permanently.

The crab trudged until it saw land with swirly cracks. If it could twist its body into the same shape, it might be able to merge with the land. The crab then struggled to stuff itself into the gaps but could not make it.

You need to find a conch that resembles the shape of my curve, said the land. You can train yourself by drilling into the conch, and your body will slowly become similarly swirly.

The crab, looking for that very conch on the beach, discovered eventually that none matched the land’s curve.

That’s when a snail approached and told the crab that, in fact, every single shell should work. It will just take you a long time to accommodate, and accordingly the shell will adapt to you. Shapes of all creatures demonstrate consistency with what the earth presents, because time will turn all of us into identical spirals.

Thanks for telling me, said the crab.

It then picked a white conch by the seaside, skeptically, and climbed into its transparent shell. As time went by, they slowly adapted to each other’s shapes, but when the crab tried to leave the shell and fit itself into the land’s cracks, it just couldn’t. The body shaped by this conch fit snugly to the shell’s inner wall.

It’s fine, just stay there; it’s your home, your body, said the land.

But I will lose my freedom to know and get along with other spirals, and will never meet my ultimate partner.

The spiral is not a fixed shape. It is the form of energy. Your voices will ultimately converge in the spiral constellation and raise a kind of resonance. So don’t worry; it’s not easy to find a home or to meet love, but you will make it. 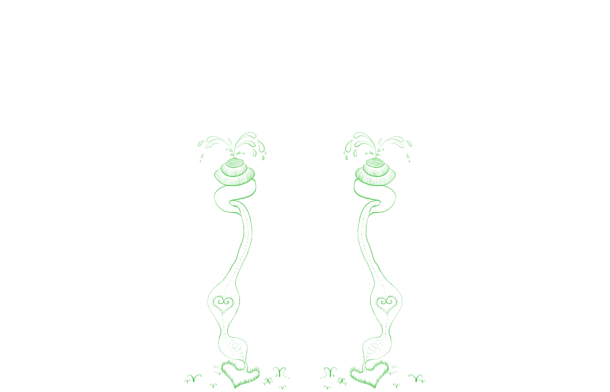 xinxin had been poor at math since childhood but was oddly interested in various mathematical curves. She didn’t quite understand spirals, and knew little about the mathematician Jakob Bernoulli. But she has considered what kind of code the calculations drawn from the different arcs of each spiral would form. She eventually became a writer, a zealous fantasy lover.

xinxin remembered the so-called Spiral Mnemonics from her math teacher, used to categorize and encode the knowledge. When memorizing new material, review the knowledge back and forth. Imagine that your memory has a gyratory structure, and you will be able to extract images effortlessly whenever you need them. xinxin failed to master such a system for use in examinations. Yet the looping, sprawling spirals kept generating in her memory of lived sentiments: those fragments, individuals, melons, paper towels… They are equally important, floating in parallel without fading with time.

One day xinxin received a letter and a package. They were from Lemongrass. The crooked handwriting revealed that she hadn’t yet come of age.

“I know the secret of steamed rolls,” the letter read.

There’s a book titled Design in Nature, written by James Bell Pettigrew, whose name would twist xinxin’s tongue. The secret of the heart comes out in a wash: its muscle fibers, intertwined in spirals, are thumping.

xindi (Xindi Zhou) is an artist and writer. She is interested in how nature and women are portrayed in fictional narratives. She creates parallel virtual spaces through different media such as fiction writing, installations and moving images in her practice, hoping to inspire action through new formations of identities and ecological possibilities.