JOURNEY OF (NO) REDRESS
Beijing

Anyone who ever bemoaned the Beijing art world’s lack of a power lunch scene was more or less vindicated when Fennel opened in the Yi House, a boutique hotel in 798, last spring. One year later, on the first Saturday of April and the beginning of the Grave Sweeping Festival, a museum group huddled over escargot and tilapia in one corner while UCCA director Jérôme Sans and photographer Peter Lindbergh lounged in a private glass room nearby. Suddenly, to the great delight of the museum group, the three-letter goddess Diane von Furstenberg (DVF, as she is known not only on her clothing, but to her assistants and collaborators) appeared from across the dining room, then headed back up to her room. She was in town, of course, to showcase her exhibition “Journey of a Dress” at Pace Beijing.

It was quite a weekend for Chinese art. We made our way through the factory with the museum tourists, a tiny, tinny, made-in-Shenzhen microphone to our mouth, feeding directly into their short-range earpiece-receivers, explaining the genesis of a movement. Inside Pace Beijing, we looked up at those perfect East German arched ceilings, then around at DVF’s astutely mounted dresses and framed news clippings, from behind an extensive press conference set-up. A row of Glimchers on folding chairs flanked her, facing off against several rows of Chinese fashion journos asking not-so-tough questions. Not wanting to disturb the q-and-a, we moved along with our group to a private collection out in Shunyi, then hopped off the city-bound tour bus on the side of the Airport Expressway and walked down the Dashanzi offramp and back into the factory compound, only five minutes late for a pre-vernissage aperitif with Gordon Matta-Clark’s little sister in a newly renovated Timezone 8. The capital in springtime!

The opening began just after dark. Back inside the gallery, Yi Zhou posed for photos with Wendi Murdoch. Christian Louboutin shook hands with Li Songsong. Art youth in their Saturday-night best popped in and grabbed glasses of champagne, their entry secured by a magnetic lapel pin bearing the lips of our lady, as extracted from a 1973 Warhol portrait. Heads turned toward a pregnant Jessica Alba, and Charlie Rose lingered conspicuously at the door, in the sort of way one suspects he is not accustomed to doing. He tapped his foot, received his wellwishers, and recounted his visit a few days earlier with Lee Kuan Yew, all while waiting for a jet-owning friend to appear from the VIP room and begin the nighttime journey to Hong Kong. A few hours later, someone else would check in for a commercial flight between the same two points, but the plane would take off without him. A few hours after that, at a convention center in Wanchai, 106 paintings would sell for $55 million in a sale titled “The Nascence of Avant-Garde China.” Two months later, despite it all, Fennel is busier than ever. 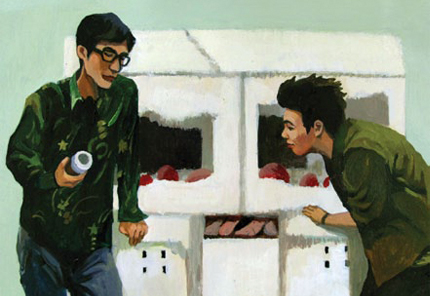 The early-morning Aeroflot jaunt between Sheremetyevo and Schoenefeld is numbered Flight 111, evoking another order in which the cities were primarily linked. For us, it was just the cheapest way across the Eurasian landmass on short notice; we connected to it after a late-night flight from Beijing Capital, en route to the fair-without-a-fair that is Gallery Weekend Berlin. For three days (April 29-May 1), forty-four of the city’s self-selected best purveyors of contemporary mount new shows and coordinate opening times, attracting out-of-town collectors by throwing in some art-fair extras like a VIP car fleet and a welcome reception in the Tiergarten.

China people were thin on the ground. We spotted only a few, including Chris Mao of Chambers Fine Art, design guru Aric Chen (who had set up a temporary tattoo parlor in participating gallery Arratia Beers), Urs Meile of the eponymous Beijing-Lucerne operation, and the long lost Chaos Chen, an early-aughts Millennium Museum curator who has since opened some sort of consultancy bridging West and East near the Hamburger Bahnhof. That beloved metaphor emerges also in the new space of Alexander Ochs, who offered a show of paintings and concepts by Zhao Zhao, in which a red beam (a “red bridge”) cantilevers out of the slightly elevated exhibition space and toward the glass storefront, becoming the front desk in the process.

Things change rapidly in this capital too. A number of galleries have made a decision, stylistic really, to abandon the familiar post-socialist warren of Mitte in favor of the pre-Weimar chic of the Potsdamer Strasse, inhabiting a strip of glorious fin-de-siècle apartment houses. Ever the ironist, John Bock played it up at Klosterfelde (No. 97) with a series of contraptions that made the old locks click and shutters creak, so noisy that one of the gallerist’s tenants elsewhere in the building decided to move out before the weekend was over. Next door and high upstairs at Arndt (No. 96), Gilbert and George sat signing their compendium of “Urethra Postcard Art,” practically begging to be photographed and Weibo’d back to the city they visited in 1993, when they looked more or less the same. Across the street, crowds mulled in the newest of art-occupied buildings, the former Tagesspiegel complex, where Frieze had popped up a lounge to mark the launch of its bilingual German-English edition. Bilingual art magazines are worth drinking to, we firmly believe; but should we be worried, even a little, when newspaper offices go post-industrial?

Yes, there was one question on everyone’s lips, and no, we can’t say what it was. Suffice it to say that at the Gala Dinner on Saturday night— a sit-down affair for one thousand in the old postal train station— the amuse-bouche was a single sunflower seed. Some spoke of boycotting the Hong Kong fair, which would be acquired by Art Basel only days later. We took it all in stride, snickering as we cleared immigration the following evening, bracing for a seven-hour layover in Moscow and taunted by a travel poster for the new Berlin-Beijing direct. It featured a Teutonic tourist who looked like someone we’d just met at an opening smiling back at a generically beautiful Chinese woman in a red silk qipao, a Forbidden City watchtower looming in the background.