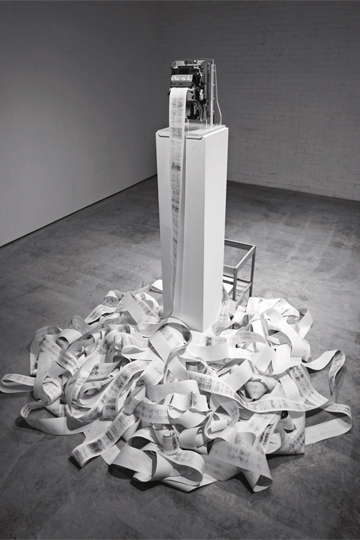 The title of Wang Chung-kun’s “Series of Another Soundscape” seems to misadvertise the show as a sonic exploration of sound as environment. The exhibition, hosted by Nou Gallery, Taipei, features five kinetic sculptures that notate music: a lottery machine that decodes the winning number on digital screen; a fax machine that prints a continuous sheet of staff music; and three sets of motors traveling on musical staffs. These automated machines act upon a shuffled program of compositional choices dictated by the laws of permutation. In the three-part gallery space, the viewer sees music notated live but does not hear it performed. Instead, the sonic space of the gallery is occupied by an unmusical soundtrack of automated machines at work—a faint hum of motors and wheels with no particular rhythm, dynamics, or melody. This mundane and seemingly under-curated symphony continues with no end in sight. The cognitive dissonance between what the viewer sees notated and what the viewer hears performed in the gallery suggests that Wang’s interest in soundscape does not lie in manipulating sound as environment, but in conducting a visual study of electronic music writing. The automated notations by the kinetic sculptures touch upon classical questions of originality and authorship in music culture.

In the first room, the viewer is invited to start the kinetic sculpture Series of Another Soundscape – Lotto by pulling a red knob. Air is blown into a transparent capsule that contains numerically numbered ping-pong balls. A group of balls are suctioned out of the capsule and their numbers, read in chronological order, constitute the winner number of the lot. Despite the similar appearance of each ping-pong ball, the lottery machine celebrates the uniqueness of those chosen at random. Wang’s contemplation of originality was first inspired by his time in military service. As the army requires disciplined uniformity amongst all soldiers, each soldier, like a lottery ping-pong ball, is undeniably an original creation with unique characteristics. To ensure fairness, the lottery machine is an objective and anonymous mechanism that composes the winning lot at random. The lack of human touch during the writing process subordinates the role of authorship in the lottery result. As Glenn Gould observes, “Technology has the ability to create a climate of anonymity… it takes the specific personal performance information out of the musical experience.”

The potential of anonymity is further explored in the second room, in which small, mobile motors are anchored along three plains of black metal tracks. The tracks are configured in rows to resemble musical scores, along which the motors travel constantly along the tracks, reversing direction upon hitting adjacent notes. This continuous movement at multiple points of the musical plain continually revises the musical compositions, like small economies of abstract labor. Their rationalized patterns of monotonous motion have mitigated the musical potential of the written composition. Consequently, these desensitized economies of musical notes operate like soundscapes that have lost their inspiration for romantic sensibility.

In the last room, a fax operation, ridden with errors, has produced an unexpected piece of electronic writing. The fax machine, over the course of the exhibition, has printed a continuous musical score that is now chaotically piled on the floor. The score has recorded creases from several episodes of paper jams, a red-stripe warning of paper shortage, and score sections where multiple layers of musical staffs are printed illegibly on top of each other. This original and non-replicable scroll of musical writing traces a specific history of unscheduled events that requires creative interpretation. Incidentally, the failure of the fax sculpture has resulted in an unorthodox piece of written music liberated from the intended, objective dictation of its mechanical author. Such an accidental death of the author has inspired the accidental birth of the reader.