While capitalist methods of production spur urban growth, their attendant practice of driving out whole communities has provided a temporary space for new segments of the population to gather. On the northeastern outskirts of the capital of the world’s factory one such space exists; it is called Picun. At the Migrant Workers’ Home in Picun, living and creating collectively allows its residents to rediscover joys only experienced during festivals and celebrations, inspiring their enthusiasm to build living spaces and to reform—even create anew—modes of existence. These modes of existence come thoroughly to light in our October issue, “Ghosts in the Spectacle,” evidence of what we call “new worker” culture. From theory and discourse to exhibition and production, we undertake a study of the transience of contemporary capitalist reality, assisted by the research and explications of scholars Zhao Chuan, Hu Bin, Wan Xiaoguang, and Li Mo & Kong. The fruit of this labor, interestingly, is not as far removed from contemporary art mechanisms as one might think—but one must think. And for this issue’s artist feature, He Jing delves into the practice of installation artist Yin Xiuzhen, finding a uniquely nomadic breed of organic evolution.

On the top section of the magazine is our regular Moving Up column, in which Karen Archey looks for a grip on the practice of Aleksandra Domanovic and its proclivity for resurrection. The streaker arriviste Li Binyuan is also brought under the spotlight, while LEAP editors Yang Zi and Wu Jianru examine the intentions behind Alessandro Rolandi’s factory intervention project “Social Sensibility” and Zhao Bandi’s debut feature film Let Panda Fly, respectively. Finally, curator Andreas Schmid recounts his experience curating the seminal 1993 Berlin exhibition “China Avant-Garde,” Sasha Zhao interviews entrepreneur-cum-gallerist-cum-artist CI Kim, and another 50-plus pages of arresting art commentary and analysis faithfully await your readership. The lower third of LEAP’s October issue rounds up fifteen of the most noteworthy exhibitions from the past few months. We visit group shows as far away as Norway, London, Seoul, Shanghai, and Shenzhen, while solo consideration is granted to Yang Zhenzhong, Liao Guohe, Francis Alÿs, Liu Han-Chih, Wang Chung-Kun, Yu Ji, Chen Xiaoyun, Gao Lei, and Maleonn. 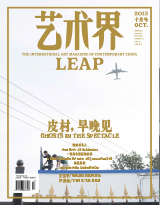