With the disappearance of an airplane high up in its skies, the mysterious region that is Southeast Asia re-appeared in our line of sight. Have we also lost touch with the complex world of art from this region? The forms Southeast Asian art takes reveal feelings familiar to Chinese artists: contempt for bureaucracy, tension with Western contemporary art rhetoric, a reluctant embrace of and distance to quotidian social reality, and a sidestepping around modernist painting. In this issue’s cover feature, we invite leading scholars from the region to elucidate these peculiarities and others: art historian T.K. Sabapathy recalls four seminal art happenings from the 1970s; David Teh proposes a rubric for video art; Zineng Wang offers an overview of ethnic Chinese painters; Iola Lenzi delineates the roots of conceptual art; and Alia Swastika considers the governance of Singapore over a contemporary art otherwise informed by a densely plural cultural context.

For this issue’s artist feature, Fang Tze-Hsu peeks behind the screen of Singaporean artist Ho Tzu Nyen’s practice, which since 2009 has gradually generated work less and less narrative in nature. This issue also sees the introduction of our new experimental and alternative features, here discussing the state of street art in Hong Kong, the Treasure Hill movement in Taipei, and the latest instant-auction craze in the Mainland.

At the top of the magazine, we present a refined version of a panel discussion in Hong Kong on the “three art worlds” of Chinese art: an interview with curator Li Zhenhua on his 15 years researching new media art; a tight exploration of Zoe Zhang Bing’s “9 m2” exhibition series at the Goethe-Institut in Shanghai; a quick reiteration of Karen Archey and Robin Peckham’s thinking behind the UCCA show “Art Post-Internet”; a candid feeling for the role grieving has played in the work of Au Hoi Lam; concerted readings of the two recent art historical efforts On Radical Art: The 80s Scene in Shanghai and Gray Carneval: Art in China Since 2000; a run-through of Robert Zollitsch and Gong Linna’s “new Chinese art music”; an overview of the politics of independent spaces in Singapore; and a heartfelt tribute to the late and great historian of Chinese art, James Cahill.

Readers hoping for direct exhibition critique and commentary won’t be disappointed with the 15 reviews in our April issue. We walk through major shows at OCAT in Shenzhen and CAFAM in Beijing, as well as The Wrong biennial of digital art, perhaps the world’s first. Solo efforts from Bharti Kher, Gabriel Lester, Liang Manqi, LeJX, Lee Kit, Xu Qu, and Lin Yan also make the cut, as do group shows in Bangkok, Shanghai, Beijing, Hong Kong, and Singapore. Enjoy. 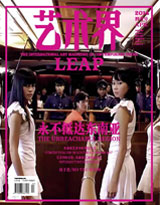