With China’s rapid industrialization and urbanization has come a growing interest in traditional Chinese culture on a spiritual level. As a means of restoring and repairing our own psychological lack, there has been a rush to make “the past” material and visible. How does this revivalism fit into contemporary art? For this issue we have invited experts in various fields including philosophy, art criticism, and architecture to debate the state of revivalism in Chinese contemporary art today. Lu Mingjun explains the 2,000-year-old ideological battle between present and past in Chinese thought, revealing a history of a continual synthesis of and opposition to foreign cultures. Pi Li examines the high points in traditional Chinese painting since the eighteenth century to reconsider and reinvigorate its study in the twenty-first-century, offering specific proposals for the theory, historical framework, and exhibition practice of ink painting. For his part, architect Wang Jiahao presents a very particular socio-historical viewpoint based on the history of architecture. Meawhile, we present the words and work of artists including Chen Zhiyuan, Hao Liang, Jin Shi, Taca Sui, Xie Fan, Zhang Xiaodi, Zhao Zhao, Shi Qing, and the Yangjiang Group, who treat the past as mentor, friend, family, and interlocutor, in order to question and resist what is inside their hearts, and what is outside. Concluding the middle section of this issue are two artist features. Contributor Freya Chou takes a look at the practice of Taiwanese artist Hsu Chia-Wei, which in its deconstruction and reconstruction of narrative space demonstrates a remarkably calm treatment of composition and objects. Meanwhile, critic Bao Dong analyzes how Liang Shuo deals with the cultural experiences in contemporary China that do not conform to artistic norms, transforming these into a method of inspiring aesthetic vigor.

In our regular column My Miles, we catch up with Swiss artist Pipilotti Rist to discuss how she employs childlike curiosity towards representing a world in disarray, while in Moving Up, Karen Archey investigates how Finnish artist Pilvi Takala reminds us of the social barriers that surround us, and incredibly, veteran undead actor A. Zombie recounts its experiences working on Chinese artist Cao Fei’s newest film, Haze and Fog. Elsewhere: editor Sasha Zhao questions the latest and greatest effort to incorporate Chinese sound art into the contemporary art canon; artist Lu Pingyuan presents the fruit of his recent work, four short fictional horror stories from the art world; renowned collector Uli Sigg outlines a brief taxonomy of art’s acquisition; and we propose three potential realities behind an email announcing the secret realization of an artwork in Rome’s MAXXI museum.

In our last issue of 2014, solo exhibitions from Qiu Xiaofei, He Xiangyu, Yan Xing, Lu Yang, Qiu Zhijie, and Xiao Xu are given precious page space, as are major exhibitions such at the Biennale de Lyon, the Athens Biennale, the Istanbul Biennial, the Singapore Biennale, the Mori’s Roppongi Crossing, and the inaugural award show, 2013 Hugo Boss Asia Art. 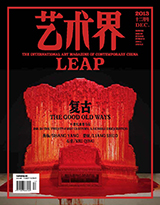