In the early days of 2017, during his allocution at the World Economic Forum in Davos, President Xi Jinping called for an “open, win-win and cooperative” model of globalization. Donald Trump, however, declared in his inauguration speech his preference for “buying American and hiring American.” In these strikingly dissonant signals sent forth by the leaders of China and the United States, one easily perceives the sound of the globalization consensus falling apart; and later this year in Europe, general elections in the Netherlands, Germany and France will extend this social crack even further. Nationalism has torn to pieces the grand narratives of “world citizens” and the “global village”—even though we are all faced with the threat of a global environmental crisis.

Crises sometimes bring back to the fore these “grand” elements, and make us rediscover the political structures and the social ideologies that hide behind “grand narratives.” But nothing is more dangerous than to let the knowledge of our forebears fall into oblivion, to disregard the spiritual realm, to form a simplified and rigid understanding of humanism, to follow others blindly and full of arrogant wilfulness… and thereby, to repeat disastrous historical errors. Might contemporary art provide an open and meditative space in which to grasp independent, diverse and critical new perspectives? With “Tiny Times,” we attempt to open up new dimensions for the discourse of contemporary art, against the dual pressure of “grand” capitalist desire and historical narrative traditions.

Top section presents an array of works by various artists: Algerian French artist Kader Attia’s work that had won him the 2016 Marcel Duchamp Prize, Reflecting on Memory, draws attention to the necessity of imperfect sutures, proclaiming in full view of everyone that the Visible should not be ignored. Sri Lankan British artist Christopher Kulendran Thomas’s project New Eelam took the form of a startup, yet it did not stop at a conceptual stage: the artist founded an actual company, started a brand, and entered into business, selling conceptual products of high-end housing in the image of a high-tech future. Wu Chi-Yu’s project Tropical Flare can be seen as a visual reading of Wakabayashi Masahiro’s book Postwar Political History of Taiwan with compound eyes. Nadim Abbas documented a section of the infamous Atlantic Wall in Ostend, Belgium, further elucidating a correlation between domesticity and warfare, drawing on Virilio’s insights in Bunker Archaeology. We also bring to the readers an acerbic review of the recent publication Donald Judd Writings, and curator Hou Hanru’s tribute to artist Chen Shaoxiong (1962-2016).

In this issue’s long critique section, author Huang Chien-Hung looks into the projected temporality of film and video. Today, an enormous transformation is taking place, as film and film viewer become mutually-referential. Film’s function as a “reconstruction for the absent viewer” has already begun to change dramatically under the influence of digital toolkits and community platforms. Through constant exchange and reception, one does not just simply “view,” rather, one “encounters.” The section also features 16 exhibition reviews from around the world, examining the 11th Shanghai Biennale, the 3rd Shenzhen Independent Animation Biennale, “Tales of Our Time” at the Guggenheim in New York, and solo exhibitions of Kerry James Marshall, and Omer Fast etc.

038
SHOP TALK
KADER ATTIA: I THINK I AM A BETTER GHOST THAN I AM A HUMAN BEING
Valentine Umansky

082
MYTHOLOGY, THE FEMININE, AND SENSE FILM: THE FLASHBACK THAT BEGINS WITH “MOVING MOUNTAINS”
He Jing

140
THE FUTURE OF THE GRAND NARRATIVES
Irmgard Emmelhainz

176
Why Not Ask Again? The 11th Shanghai Biennale
Wu Mo

180
Wu Ding: The Rhythm of Ultimate I
Jiang Yuhui

199
Tales of Our Time
Wu Jianru 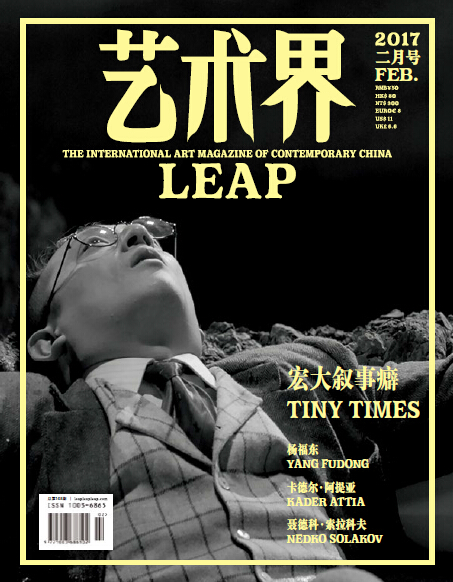