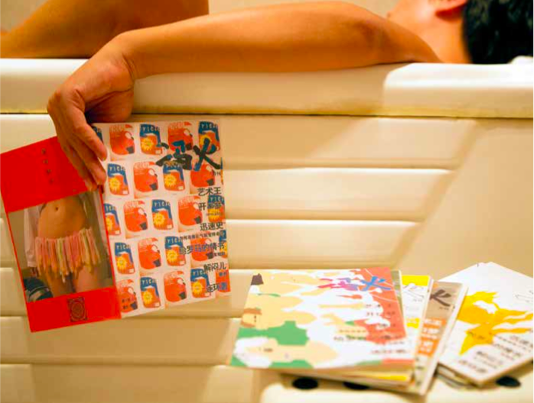 FONGFO IS A periodical published on the 21st of each month, saddle-stiched in B4 size. Though not unlike the magazine Stories, it is typically only around 12 pages long. Created by a group of artists, Fongfo is not quite an art publication, nor is it a media platform in the shape of a magazine. The title Fongfo is probably derived from the name of its editor and producer, Feng Jingwei, who explains his vision for the periodical in the column “Sleeptalk- ing” as follows: “Fongfo will eventually become the single most be- loved magazine in China.”

One can find instructions on “How to quickly become editor- in-chief of a periodical” in an advertisement on the back cover of the magazine (October 2013, issue 8). The keywords laid out in the ad copy seem autobiographical: “young, unemployed, preferably a pulp literature lover, and ideally an artist … low priced … solicit submissions from friends, preferably in series that span several issues … the title of the publication must be bold, conveying con- fidence in its success.” This whimsical description seems superfi- cially self-deprecating, but it offers a peek into the ambition of the project. The unique and irreproducible taste of Fongfo is shaped by the simplicity of its layout and binding, its crude aesthetics, the hodgepodge of youth culture it publishes, its free imagination, and its unorthodox advertisements. All this eccentricity makes sense for a publication with an artistic bent—and, at the incredibly low retail price of RMB 1, you won’t go broke and you won’t lose out.

Fongfo is not simply a platform to publish work or realize pro- posals; instead, it draws artists into the production schedule of a periodical, turning them into editors and contributors tasked with devising different strategies to fill the columns they are assigned. In this sense, Fongfo is like an eternally unfinished work of art that reminds the world of its existence each and every month. Feng Jingwei’s “King of Art” is a serialized narrative that opens each is- sue, a vaguely lowbrow story based on a student’s experiences at art school, set in the world of contemporary art but mixed with ele- ments of youth culture and a kung fu underworld. Written in a way that does not flaunt its specific literary talent, the story relies purely on dialogue and basic descriptions of events to unfold its plot. For artists holding dual identities as editor and contributor, writing is a key tool of contemporary art no different from visual media, albeit with a greater emphasis on logic than on format or technique. “A Love Letter to Rome,” which closes every issue of the magazine, adopts the format of the traditional letter column but runs mono- logues authored by Zhu Jianlin, allowing the reader to glimpse but never interact.

“A painter cannot change anything. Only the true artist is re- membered by history—only the King of Art makes history.” Fongfo may be a wild attempt to make history. In a framework of the art- ists’ own device, the broadcasting nature of the magazine is an ac- ceptable compromise between creators and readers, each of whom enjoys his or her own brand of instant gratification. While Fongfo deconstructs and revisits the traditional publication format, it is not a particularly groundbreaking attempt to revolutionize its conven- tions. It also sells advertisements; the people in charge of both sales and distribution are friends of the group, meaning they work for free. Long-term deals allow art training studios, coffee shops, and reasonably serious galleries to occupy important ad spaces tradi- tionally monopolized by luxury brands, including the inside front cover, inside back cover, and back cover. Artists can also buy space to implement their own works and projects—for a fee.