“I had never believed in ‘political art,’ but in 2012 I ran for the Legislative Council as an artist.”

“The art world is polarized into two camps. There are artists who energetically participate in social movements, gradually distancing themselves from art and even believing aesthetics to be pointless decoration. In the other camp are artists completely indifferent to and ignorant of politics, institutionalized products of the art system who only know how to play by the rules.”

I, THE LEUNG Po-shan Anthony of today, most resemble the first kind of artist Chow Chun Fai refers to above. In this era, defined as it is by West Kowloon and the Special Economic Zones, there are those who have bristled at Hong Kong’s developments and withdrawn, and there are those who have rushed to take advantage of the changing political and economic climate. In the winter of 2011, the Factory Artist Concern Group decided to nominate Chow Chun Fai to run for the Legislative Council; the previous summer, I had publicly vowed to no longer comment on contemporary art.

Chow was a younger classmate when I attended the Chinese University of Hong Kong. Already well-known and on a brilliant trajectory, he had a face like a movie star, always poised and sophisticated. I wouldn’t say I watched him grow up, but I do know that the time period shaped him: the 1997 handover marked a defining split between the experiences of the generations on either side of it. During the transition period, artists suddenly became a symbol of cultural democracy, and before departing, the very last governor of Hong Kong established an elected Arts Development Council. Installations, performance art, cultural identities, and independent art spaces all sprouted like weeds at the last minute. Despite the sheer volume of commercial art galleries popping up all over Hong Kong’s Central district, only Hanart TZ had been able to sell Hong Kong art outside of the Chinese contemporary art market. Aside from the political implications of the end of colonial rule and the beginning of “one country, two systems,” the transition also afforded a rare opportunity for Hong Kong artists to receive international exposure, helping to offset their low profile in mainstream society.

When the era of China’s Special Economic Zones arrived, art in mainstream society gradually became “useful,” not because culture had maintained its identification with the establishment of societal consensus, but because the inter-city competitive forces that helped globalization take root in Hong Kong began to emerge front and center. Using cultural landmarks, creative industries, and distilling and retaining the vibrant and nuanced essences of urban life, Hong Kong rushed to catch up with the pace of global industry. In 2004 the Hong Kong government first proposed the land-developer construction of the West Kowloon Cultural District; in 2008 due to a simmering public reaction, original plans were scrapped and the project rebooted. During this stalled period, galleries, art fairs, urban renewal, high-end shopping malls, luxury hotels, and even weekend art jams all began to take advantage of the mood and impatiently crop up.

In 2006, Chow Chun Fai completed his MFA, having mounted his first exhibition of his work at a commercial gallery in 2004. Products of their time, artists of that generation were doomed to be the first beneficiaries of the new West Kowloon Cultural District. Even though the government steadily increased public funding for art and cultural development, private galleries and Leisure and Cultural Services Department-sponsored museums all became more and more commercialized. Culture was no longer purely a service but an idealized vocational calling for the young, albeit one that by no means promised a stable future. Nevertheless, hordes of graduates poured into the field without guarantee of finding work.

Even though at that time I was participating more and more actively in independent media and social movements, I could not accurately gauge the distance between art and politics. To this day I still don’t know why I persuaded Chow Chun Fai to run in the elections. If he had been elected, the moment he was elected his future as an artist would have been over. He was taking a huge risk, and the odds were seriously stacked against him. In the mess of contemporary politics, with its chaos and inconsistency, would he really come out on top in the end?

In the past, the most creative people did contemporary art; these days, they are in politics. Within the scheme of Walter Benjamin’s formulation of politicizing art to counteract the aestheticization of politics, Chow Chun Fai has not played the role of asserting artists’ rights. On the contrary, he has returned to the older model of allowing politics to just be politics and art to just be art, not mixing the two. Both before and after the election, he was simply himself, the artist. Yet in political debates he was more knowledgeable and composed than the career politicians. In the end he lost the election, but this loss did not carry over into his art. He found a way to paradoxically yet elegantly unite the two. 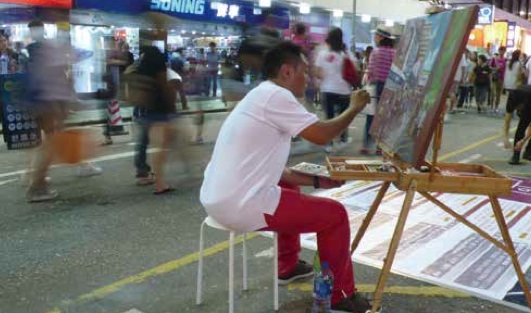 Hong Kong society still has an ambiance of freedom, but its democratic political system has stagnated. The Legislative Council was originally open to participation from all echelons of society, serving as a space for societal consensus. But since the colonial period, functional groups guaranteeing the interests of the business elite have been elected, and this has persisted into the era of Special Economic Zones. The practice is similar to ensuring the election of representatives from ethnic minorities, except that in this case those benefiting from preferential treatment are those with a vested interest in certain businesses and conservative politics. Even though Chow Chun Fai is an artist and ran as a candidate for the Sports, Performing Arts, Culture and Publication Sector, he was really trying on behalf of all regular citizens to challenge the growing commercialization of cultural power. He also set out to disrupt behind-the-scenes practices of soliciting votes, choosing instead to canvass in broad daylight, armed with leaflets, knocking on doors, and attending forums. His tactics forced his opponents to create political programs for voters they hoped to win over, in the process leaving many in the community with a renewed opinion of artists.

One feature of the election was nonstop electioneering, which I followed closely. But what left the deepest impression on me from the whole process was one day of canvassing that lasted late into the night. Afterward Chow Chun Fai dropped me off at the house of old friends and fellow artists Kwan Sheung Chi and Wong Wai Yin to spend the night. I had just lay down to sleep on their living room sofa when Chow stopped by to drop off his work Reproducing ‘Hong Kong—Live It, Love It!’ for Kwan to work on post-production and ship in advance to the Liverpool Biennial. The work consisted of a series of uniformly sized original paintings, 108 in all, depicting scenes of Hong Kong life from the Hong Kong tourism board’s campaign. The last weekend before the election, the team wanted Chow to sketch the process of gathering votes on the street in a relaxed and natural setting. He ended up doing it on the busy Mong Kok pedestrian street, a place he rarely enjoyed visiting.

Chow Chun Fai has always believed in a restrained and tactful approach to art, one devoid of political appeal. As an artist, the most direct interpretation of his candidacy is as a piece of performance art. In fact, this election did feature a performance artist, Pong Yat-ming, who chose an even more difficult district to run in, serving as a one-man campaign to take on Big Business and its narrow lifestyle prescriptions. The result for both artists was overwhelming defeat: Chow received only 477 votes while his opponent, Ma, received 1,106. Pong Yat-ming received 6,031 out of the 874,694 votes for the entire New Territories district.

I suspect contemporary art has never actually negated aesthetics, and therefore I do not agree with the idea that aesthetics is just mere decoration. The view of politics and art as merely means and ends stems from the contemporary conception of aesthetics as disconnected from theory. Good political art is not merely political slogans or propaganda, which seek to empower the weak through altering specific production methods. Art does not necessarily need to have political content in order to create a political result. To borrow from Rancière, aesthetics have the power to provoke the “distribution of the sensible” (that which can be sensed), and only when we are able to unlink aesthetics and politics will relationships between person and person, and person and power, be able to start over and develop again. I have no intention of idolizing Chow Chun Fai; the idea is merely that if we may believe in art, then I shall look forward to some day in the future when we can transcend the boundaries between politics and art. (Translated by Caly Moss)